Sebastien, a Geneva-based private banker who has been skiing since he was three, has just bought a chalet in the Swiss Alps. He opted for the Valais mountains as a place to escape the city, partly because of the Covid-19 pandemic. “Choosing not to own a car, I needed somewhere on a good train line to Geneva so that I can divide each week between the two places,” he says. “It is so liberating to be in the mountains after the past few months.”

He is not the only Genevan to have decamped — for at least part of the time — to the Alps of late. “Like the big exodus from London to the Cotswolds [in the UK], so the Swiss, or Swiss-based expats, have been moving from the city to the mountains,” says Annabelle Common of Naef Prestige, a Swiss estate agent affiliated to Knight Frank of the UK.

Mountain lovers and winter-sports enthusiasts across Europe and the US have been rethinking their work and leisure priorities, and luxury ski resorts have benefited. Prices in some have reached record highs as domestic purchasers have filled the void left by international buyers who, bar the odd viewing trip by private plane or sight-unseen purchase, have been absent. Last winter, locals had the slopes in the Alps largely to themselves, at least when the ski lifts were open.

With Austria currently in a 20-day national lockdown and Switzerland having introduced new restrictions to entry with the emergence of the Omicron variant, this season is shaping up to be a little like the last one. Would-be foreign buyers who do manage to reach the resorts this winter are likely to find markets have been picked over by domestic purchasers.

“When Covid hit, we wondered who was going to replace all the foreign buyers. We needn’t have worried as the Swiss stepped in three times over,” says Cassandra Levene, a sales executive at estate agent Alpine Homes in the Swiss resort of Crans-Montana, which is popular for its upmarket shopping and golf course.

In prime resorts, where the number of second homes is capped by law at 20 per cent of the market, properties are in short supply. The average price of a Swiss Alpine holiday retreat rose 4 per cent in 2020 — the biggest annual increase since 2012, according to Swiss bank UBS — but in areas where properties cost more than SFr10,000 ($10,900) per square metre, prices rose 8 per cent. “Holiday homes have made a real comeback,” says Claudio Saputelli, head of real estate in UBS’s global wealth management division.

Domestic tourism in Swiss ski resorts increased nearly 30 per cent in the 2020-21 winter season over the previous one, according to the Swiss tourist board, with ski lifts kept open, unlike those in Italy and France. “Restaurants had to close for indoor dining, but some served take-out fondue and raclette, with bottles of champagne brought out to sheepskin rugs on the snow,” says Levene.

Buyers from Geneva have been spending SFr900,000-2m on chalets in villages such as Thyon, Veysonnaz and Nendaz in the “quatre vallées” (four valleys) skiing area. Banker Sebastien chose Veysonnaz, which can be reached via a 90-minute train journey from Geneva to Sion, and then a 15-minute bus ride. “It shares the same great ski area as Verbier but is much less expensive and more authentic,” he says. Another draw has been the “safe haven” aspect of Swiss franc investments. With Swiss base rates negative since 2015, almost all Swiss-based buyers opt for mortgages, says Common, citing a typical rate of 0.9 per cent on a 20-year, interest-only mortgage with a 30 per cent deposit.

Distance has not affected demand from Swiss nationals, says Simon Malster, managing director of UK-based estate agent Investors in Property, where enquiries from Swiss clients doubled year on year last January as interest from UK buyers fell. “In May 2020, we sold a SFr3m, three-bedroom penthouse apartment in Villars to a client living just 25km away in Villeneuve. Then another apartment in the same town to a Swiss national living in Australia, who hasn’t been permitted to leave the country,” he says. “A relative in Lausanne viewed the apartment and she completed the purchase remotely.” 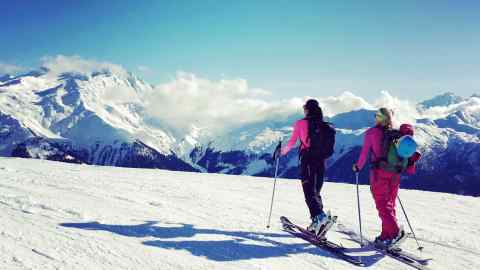 Villars-sur-Ollon, in the western Vaud Alps, is popular with Swiss buyers living near Lake Geneva for its year-round community and international schools, and is within 90 minutes’ drive of central Geneva. But Verbier is a far more fashionable resort and properties have been selling for more than the asking price, says Common. A four-bedroom apartment in a luxury residence priced at SFr6.5m sold for SFr6.8m in August, and a 1980s chalet, valued at SFr3m-3.5m but in need of refurbishment, near the Médran ski lift, sold for SFr4.2m to a Swiss resident.

Prices for prime chalets in Verbier increased 10.2 per cent in the year to June 2021, according to Knight Frank. But the resorts of German-speaking Switzerland — which typically attract buyers from the cantons of Zurich and Zug — posted even bigger rises: St Moritz was up 16.5 per cent, Klosters 14.4 per cent and Davos 13.4 per cent.

The rarity of properties with official second-home status has pushed up prices in the town of Kitzbühel, Austria’s most exclusive ski resort. There is also a lack of new-build properties because of breaks in construction during lockdown, followed by global supply chain problems. “It has provided an opportunity for sellers to ask cheeky prices before new properties get completed,” suggests Florian Hofer, executive director at estate agent Engel & Völkers. He says his sales last year included chalets at €17.5m and €22m. “It’s not an overheated market but an accelerated one, driven by cheap money, fear of another Covid lockdown and the thought of being stuck in an apartment in Vienna or Munich,” he says. “Buyers became much less price-sensitive.”

The Austria-Germany border was closed to tourists last winter, though not to second-home owners. Locals say it was one of the best skiing seasons ever, even without the parties in its palatial hotels. Hofer says the number of Austrian buyers increased, though he also counts the many owners from Munich who drive 90 minutes across the border most winter weekends as “locals”. Kitzbühel is within easier reach of the Bavarian capital than the resort’s other big market, Vienna (five hours’ drive away), or the Austrian cities of Graz and Linz.

Austrians’ preference for funnelling their money into property — so-called Betongold (concrete gold) — rather than stock markets is driven by bank rates, says Ulrike Lahoda, managing director of estate agent Absolut Immobilien in the lakeside town of Zell am See, near Salzburg. “Austrians have been buying here during the pandemic at a higher level than before, not because of the race for space but because they are worried about their money in the bank depreciating [due to negative rates],” she says. Austrian bank lending rates are about 1 per cent.

Second homes in Austria’s tourist areas have been strictly limited in recent years to encourage a year-round vibrancy. Instead of lying empty when owners are away, properties with holiday-home status generally come with a rental obligation, which means they must be made available for rent for a certain number of weeks each year. Owners can reclaim the 20 per cent VAT on these properties when purchasing them new and make a steady income to cover running costs.

It’s driven by cheap money, fear of another lockdown and the thought of being stuck in Vienna or Munich

Despite the scarcity of such properties, Austrians are warming to this investment model, which is popular with international buyers, says Thomas Joyce, head of sales at estate agent Pure International. He reports a fall in interest from UK buyers since Brexit, which has made homebuying more complicated for them as non-EU nationals. Pure is selling three-bedroom apartments with a rare combination of second-home status and “ski in, ski out” facilities (whereby residents can ski straight on to the slopes from their front door), for €2.8m in Schröcken-Nesslegg, in the Arlberg ski area in western Austria. Buyers tend to be from Vienna or nearby cities such as Bregenz and Dornbirn.

There is a growing appetite for space and quiet. “Two years ago, a buyer might have been looking for a lock-and-go three-bedroom apartment close to bars and restaurants, but now more space in a more peaceful location might be preferred,” says Roddy Aris, an associate partner at Knight Frank responsible for its French Alpine network. Domestic buyers rose from 60 to 74 per cent of the agent’s total between the 2019-20 and 2020-21 winter seasons. Purchasers are typically from Paris, Bordeaux or Lyon.

Buyers who forsake proximity to the Hermès store or the two-Michelin-starred La Table de l’Alpaga restaurant in Megève, near Mont Blanc, for the outlying areas of Le Jaillet, Le Maz or Côte 2000, can expect to pay €4m-plus for a chalet. Or there is Courchevel’s Belvedere district, a tranquil hamlet up the slopes from the bustle of the resort centre.

In Méribel, buyers from France are no longer just those close to retirement, says Ophélie Dupont of estate agent Savills. Clients aged 40-50 are typically spending €2m-plus on a chalet, she says. Peaceful villages with year-round residents are also in demand, says Lucilia Desjeunes of estate agent Leggett Immobilier in Savoy. “In the pretty Savoyard village of Le Bettex, or the hamlets of Le Villard and Chatelard in the Belleville valley, expect to pay just under €1m for a renovated four-bedroom chalet,” she says.

In May, Elric from Lyon bought a two-bedroom second home with a garden in Le Villard for his family after initially looking in Méribel and Courchevel. “We faced a lot of competition from French buyers,” he says. “Outside space and somewhere suitable for a home office were much easier to find away from the big resorts. During school holiday visits, I can tele-work [for a Swedish transport company] while the children and my wife ski.”

As second-home buyers upgrade to larger properties and new buyers arrive from cities such as New York, Miami and Los Angeles, there have not been enough properties to go round, says Edmund Foran, managing broker at estate agent Douglas Elliman. “Many people came out for a holiday and found the cultural amenities they need here. There has been a shift of focus to multi-generational meeting places with outdoor spaces.”

Such is the appetite for single-family homes that values have escalated in areas around Aspen, such as Missouri Heights, where previously demand was low. “We’ve seen unprecedented demand down valley, extending all the way to Glenwood Springs 45 miles away,” says Foran. As the new winter season approaches, high-end rentals are also in short supply. “People just want to go skiing.”

Get alerts on Property sector when a new story is published