Is there still life in the annuities market?

Tomorrow’s retirees want guaranteed income — but not at any price

We’ll send you a myFT Daily Digest email rounding up the latest Next Act news every morning.

Before “pension freedoms” were introduced in the UK, it was the norm for workers to trade in their company pension pot and use it to buy an annuity when they retired. This one-size-fits-almost-everyone system resulted in around 400,000 workers a year buying annuities worth some £14bn.

Converting your pension savings into a guaranteed income for the rest of your life gave retirees certainty. While this concept is still one that appeals, annuities rarely feature in modern retirement journeys.

Former chancellor George Osborne made history when he announced at the 2014 Budget: “No one will have to buy an annuity.” They had declined in popularity as interest rates fell, eroding the amount of annual income a pension pot could buy, and were seen as poor value because the most popular annuities sold were “single life” and expired when pensioners died, and did not form part of their estate.

Yet despite their limitations, advisers say that annuities can still form a valuable part of retirement plans for some clients.

Sweeping reforms introduced in 2015 made it easier for retirees to keep their pension pots invested and draw down a variable income from them for the rest of their lives. Any money remaining when they died could then be passed down to their families.

But the changes have brought new dangers. Many people who move into drawdown lack the expertise to manage their investments, or assess how much they can safely draw from their pension pots to cover a life expectancy in retirement that may stretch to 30 years or more.

“Carriage clock retirement is over,” says Emma Byron, managing director of retail retirement income at Legal and General, noting that the path of trading in a pension for a guaranteed income has been “replaced by bespoke journeys where the retiree is in the driving seat”.

She predicts that within a few decades there could be 20m different plans for the UK’s projected 20m over-65s.

However, the approach you take in managing your funds is likely to evolve as you get older. In the earlier stages of retirement, the flexibility and investment benefits of drawdown are likely to appeal more. In the later stages, the guaranteed income that annuities can provide is more sought after.

Advisers stress that it is possible to use a combination of the two approaches, but there’s little evidence that consumers are doing so.

L&G has seen no evidence of this, either in public data, or from its own customers. Its recent report “The retirement income riddle” found that over-55s spent more time buying a car than deciding how to use their pension. “Ambitions for retirement are soaring, yet financial conversations have not yet caught up,” was its conclusion.

Next Act
How Covid-19 rebooted retirement 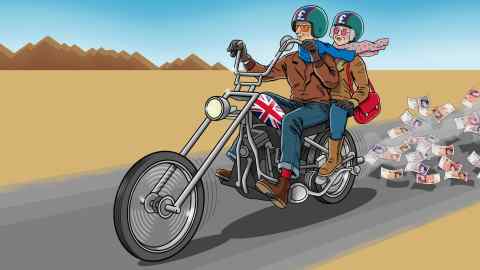 Hargreaves Lansdown (HL), the UK’s leading savings and investment platform, recently launched a “non-advised drawdown” offering. It has been designed with flexibility in mind, enabling customers to move easily to an annuity as they get older.

However, the company said it had not seen an uptick in interest in annuities since the pandemic started. Sarah Coles, personal finance analyst at HL, says: “Part of the issue is that because interest rates are so low and gilt yields have dropped, annuity rates are very low — and have fallen very marginally since the start of the year.”

Hargreaves says that confidence in obtaining a guaranteed income is the number one reason that motivates customers to consider buying an annuity. However, Coles adds: “Retirees want guaranteed income, but not at any price.”

The hybrid approach could be a more effective way to approach this. “It’s always worth remembering that it isn’t an “all or nothing” decision, Coles says. “You can use part of your retirement pot to buy an annuity and take part as drawdown.”

Buying annuities in tranches can de-risk your investment profile as you age. It’s also worth remembering that annuity rates tick up as you get older, and could be much higher than you think if you have certain conditions or illnesses that could impact your life expectancy.

“Later in your retirement, when you’re more likely to have one or more conditions that mean you’re entitled to an enhanced annuity, you can buy another one with another tranche,” adds HL’s Coles. “It gives you the best of both worlds — of having security of income without buying into rates at any one time.”

Annuity providers may offer enhanced annuities for those with impaired health conditions such as heart disease, cancer, kidney failure, high blood pressure or diabetes. Smokers can also get better terms. The rates and which conditions are covered depends on the provider, so it pays to shop around.

For example, the enhanced annuity rate for an overweight smoker who is taking medication for high blood pressure and high cholesterol can be up to 35 per cent more than a standard annuity according to the Money and Pensions Service.

Sales of annuities before the pandemic were low by historic standards, but there is increasing evidence that sales are ticking up.

The Financial Conduct Authority’s retirement income data to March 2020 showed that while 674,000 people accessed their pension pots for the first time, annuity purchases declined by 6 per cent with just 69,500 policies sold.

However, the latest figures from the Association of British insurers show that the numbers of people buying a guaranteed income for life (annuity) increased by 41 per cent between April and September last year. Increased market volatility was undoubtedly a factor in boosting their appeal.

At the FT’s recent Digital Dialogues event, plenty of FT readers asked when annuity rates might improve. Some experts think this could happen in the next few years. As well as being influenced by interest rates and gilt returns, annuity rates are based on life expectancy rates and these have fallen in the UK in the past few years.

So the message is very much one of investigate your options, either with your adviser or by making use of the many sources of free information and guidance.

While pension schemes are not required to provide independent advice to retirees, Nigel Peaple, director of policy and advocacy at the Pensions and Lifetime Savings Association (PLSA) says “a very great number do encourage people to take advice or guidance”.

He points out that since March 2015, the government’s free Pension Wise service, available to those aged 50 and over, has provided impartial guidance for people considering their pension options. He urges retirees to shop around and compare annuity rates by using what is called the “open market option”.

The PLSA is proposing a framework to support pension providers “to build retirement income solutions that blend the features of a range of drawdown and annuity products suitable for retirement, and for schemes to signpost to them”.

So perhaps there is still life in the annuities market after all.

Lindsay Cook is the FT’s Money Mentor columnist. If you would like to contact her about a financial issue, email money.mentor@ft.com