Two stunning brews advance the cause for the low-alcohol lifestyle

The no-lo market has exploded in the past few years: it’s now possible to find non-alc beers and ciders, Campari substitutes, zero-proof “gins” and even liqueurs that are alcohol-free. Yet despite all this innovation, really convincing alternatives to wine remain in disappointingly short supply: a shortfall that’s now being tackled by some of gastronomy’s finest minds.

Ama is a new sparkling tea range created by Ramón Perisé and Dani Lasa, the current, and former, heads of R&D at Mugaritz, San Sebastián’s famously inventive two-Michelin-starred restaurant. Fermented from tea like kombucha, cellar-aged on the lees like champagne, and packaged to look like a hip natural wine, Ama is a brand that will speak to oenophiles – but at only 1.5 per cent abv.

“For many people, kombucha is just a health drink, but it can be a really great matrix for preserving flavour while lowering alcohol too,” says Perisé. “That process of fermentation gives you much more complexity and length – you get many more peaks of taste.”

The tea for each brew is sourced by Rare Tea Company’s Henrietta Lovell. And every release is just a few thousand bottles, so the range of styles is constantly changing.

Ama Bi, made from Sri Lankan lemongrass, marries a fermented tanginess with perfumed notes of bergamot, rose and sweet orange, a little like a Riesling or light orange wine. Ama Bat, made from Japanese sencha Yabukita, is more savoury and structured: it has umami-ish notes of seaweed and a yeastiness that’s particularly good with food (both around £26).

Another trailblazer is the Danish drinks company Muri. It was founded in Copenhagen by the former distiller at Empirical Spirits and a Noma alumna, and takes wine as its inspiration – but the fermentation techniques, culinary tricks and obscure ingredients used to create its less than 0.5 per cent abv recipes are so complex, the result is almost impossible to categorise.

HTSI
8 of the best low and no-alcohol drinks 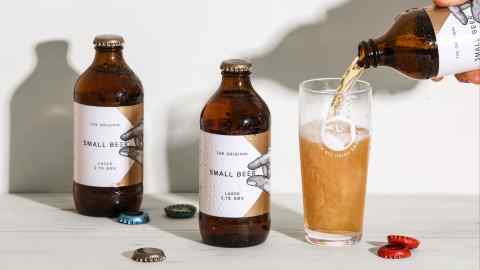 Muri’s answer to champagne, Passing Clouds, is a sparkling blend of fermented white currants, quince kefir and jasmine tea, finished with geranium and woodruff kvass. It has the uplifting quality of champagne, but the taste is totally unlike anything else: fresh, with notes of stone fruit and tropical fruit, and a touch of vinous funkiness.

Muri’s red wine alternative, Nuala, is made from fermented blackcurrants, chamomile kefir, pine, fig-leaf kvass and “supernatant oak kombucha” (that had me hitting Google too). The recipe is almost comically complicated, but the result is reminiscent of an easy-drinking Beaujolais – bright red and black fruits, nice tartness and a gentle tannin (both £16). Which might sound a bit Pseud’s Corner. But it demonstrates how non-alcs of the future could be gateways to new flavours, rather than just lower-abv. Muri is already on the list at Noma’s new burger joint, Popl. Other restaurants are getting on board: Berlin’s Barra has teamed up with Muri to create a limited-edition recipe for release later this year. A new kind of drinking culture, in more ways than one.