Dalio warns regulators will ‘kill’ bitcoin if it becomes too successful

Ray Dalio said regulators will shut down bitcoin if the cryptocurrency becomes too successful and dismissed predictions by Ark Invest’s Cathie Wood that its price would increase tenfold within five years.

Speaking at the Salt Conference on Wednesday, the founder of Bridgewater Associates, said bitcoin would be a viable investment alternative as long as it was accepted for payments, but added: “I think at the end of the day if it’s really successful . . . [regulators] will try to kill it.”

He also took issue with Wood, who told the Salt conference — an annual gathering of hedge fund managers in New York City — on Monday, that she expected bitcoin to be worth $500,000 in five years, a forecast that Dalio said “doesn’t make sense”.

Wood’s investment firm has unveiled plans for a bitcoin exchange traded fund, although it is yet to receive regulatory approval.

Dalio’s comments come after Gary Gensler, chair of the US Securities and Exchange Commission, called on Congress for more regulatory powers to deal with the “Wild West” of cryptocurrencies.

The SEC last week warned Coinbase, the first major US cryptocurrency exchange to list publicly, that it would sue the company if it launched a new digital asset lending product called Lend. 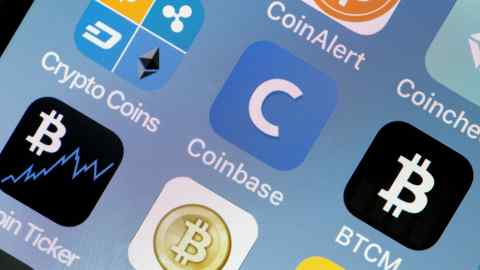 The news sparked a debate on whether such products, which allow users to earn interest on certain digital assets, should be considered securities and therefore fall under the regulator’s jurisdiction.

Dalio said he has himself purchased cryptocurrencies but his holdings are still small relative to his investments in gold. He added that “governments don’t want alternative currencies” but that investors should diversify their holdings.

The price of bitcoin has jumped almost 50 per cent this year with high-profile investors such as Paul Tudor Jones and Stanley Druckenmiller throwing their weight behind the cryptocurrency.

Dalio, who is co-chief investment officer and co-chairman of the world’s largest hedge fund, with more than $100bn in assets, also indicated that he is preparing to leave the industry. “I’m done in a year or two,” he said.

The investor predicted that markets would look different in the next few years as the effects of fiscal and monetary stimulus wore off. “You’ve had a good stimulant and everyone is high and it’s great. But when that wears off, it’s going to be somewhat of a different picture,” he said.