‘Why die rich?’ The world according to philanthropist Barrie Wells

We’ll send you a myFT Daily Digest email rounding up the latest Philanthropy news every morning.

Barrie Wells hasn’t had much sleep. He didn’t get home from cheering his beloved Liverpool Football Club to victory in the Carabao Cup Final until 2am. And yet, just a few hours later, he’s exhibiting energy levels more usually displayed by the athletes he’s assisted to sport’s biggest prizes. “Why let your money sit in a bank,” he asks, “if you’ve got the energy to make a difference?” Wells, it should be noted, is 82.

It’s this vim which has seen him help the likes of Jessica Ennis-Hill or Katarina Johnson-Thompson become world-beating champions, giving them the resources to train properly; or giving more than 12,000 children with life-threatening illnesses or disabilities access to top-tier sporting and entertainment events like Silverstone. In fact, such is Wells’s desire for positivity and betterment, he has vowed to spend the vast part of his fortune in his lifetime. “The Kodak founder George Eastman said that those who leave their money to be distributed by others are pie-faced mutts,” he says.

Hailing from pole-vaulting stock – his grandfather held the world record back in 1889 – Wells himself wasn’t a bad sprinter, leaving his mark on the cinder tracks of the 1960s. He would make his millions, however, in insurance, using his “profoundly disruptive” style and problem-solving skills to undercut competitors around the globe. Wells has often built an enterprise from nothing and, at its zenith, sold it for millions. In his sixth decade, he was set to start the cycle all over again – but then he had a thought. The real joy of money was the freedom it gave him to watch sport on a grander scale. (An athletics superfan, he has travelled to nearly every Olympic Games since 1972.) He also knew that one of the biggest challenges faced by athletes is lack of funding. With London 2012 approaching, he vowed to back the country’s most exciting talent, giving nearly £1mn to 18 sportspeople.

In the cash-strapped world of athletics, such largesse can be the difference between success and failure. For London 2012 “poster girl” Jessica Ennis-Hill, it allowed her to employ a world-class physio in the run-up to the Games; for future Heptathlon World Champion Katarina Johnson-Thompson, support was as simple as learning how to drive. “A heptathlete has a lot of kit to carry – seven pairs of shoes for starters,” explains Wells. “You don’t want to be clambering on and off buses with that.” By the time “KJT’‘ won the world title in 2019, Wells had been backing her for 12 years.

Equally inspiring are Wells’s efforts to help those outside of the public eye. After acquiring an executive box at Anfield Stadium in 2010, the entrepreneur began using the space to host children with life-threatening illnesses and disabilities. In a little over a decade, Wells has not only secured spaces at most leading football clubs, but forged relationships with The Jockey Club, Formula 1 and top level rugby and cricket clubs. Add more than 100 major entertainment venues and a biennial outing to the Farnborough Airshow, and Box4Kids, the resulting initiative, now dishes up experiences to multiple children every weekend. “Seeing kids who’ve spent so long in hospital – some with brain tumours, others who’ve had open-heart surgery – talking to one another, is quite something – as is seeing [their] parents smiling,” says Wells.

More often than not, stars including Manchester City’s Jack Grealish and John Stones or Strictly Come Dancing’s Anton Du Beke come to say hello. “Imagine being that kid when Grealish comes in and sits next to you,” adds Wells. “For me, this is sheer happiness – a happiness that could never be bought.” 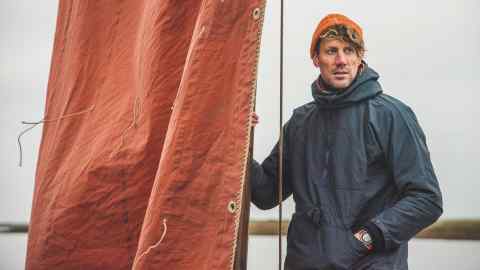 Today Wells is focused on increasing the number and size of boxes he has access to – a job that “borders on obsession”, he admits. He’s also continuing to support UK athletes, most recently funding 800m prodigy Keely Hodgkinson, who won silver at the Tokyo Olympics, to undergo crucial warm weather training in Florida. “I was jumping round the living-room like a lunatic,” he says of her record-breaking run.

He says that, thankfully, his two children are “both well-grounded and not obsessed with inheritance,” so he’ll keep spending. And he urges others to spend, too: “There are so many wealthy individuals in the UK, and they could feel an immense sense of achievement by doing something of real benefit to society. I don’t just mean writing cheques, I mean getting involved with something they truly care about. Let’s face it,” he concludes, “once you’ve gone, it’s too late.”

Get alerts on Philanthropy when a new story is published