Italy’s long-term borrowing costs remained stuck near the highest level since 2014 at an auction on Thursday in the latest sign of how investors are grappling with political turmoil and looming elections in Rome.

The country issued €2bn worth of 10-year debt at a 3.46 per cent yield, a decline of 0.01 percentage points compared with the previous auction on June 30, according Italy’s public debt office. It also sold €2.75bn worth of five-year debt at a 2.82 per cent yield — the highest borrowing cost since the wake of the eurozone debt crisis in 2013.

The figures contrast with Germany, the region’s benchmark borrower, which has seen the borrowing costs it has paid at sales of new debt fall in recent weeks. Berlin sold 10-year Bunds at a yield of 0.94 per cent on Wednesday, compared with 1.22 per cent at an auction in early July.

The widening gulf shows how investors are demanding more compensation for the risk of holding Italian bonds after prime minister Mario Draghi resigned earlier this month. It also means the rise in yields on secondary markets where bonds trade is filtering in to Rome’s public finances.

Even before Draghi’s resignation, Italy was struggling with soaring food and fuel prices stoked by Russia’s war in Ukraine, and the end of a decade of ultra-loose monetary policy and bond-buying by the European Central Bank. The ECB last week took a further step away from accommodative policy when it increased interest rates for the first time in more than a decade.

Analysts are concerned that a government less committed to Draghi’s agenda of economic reform could come to power after Italy holds elections on September 25. Less fiscal discipline and faltering on ambitious agenda aimed at boosting the country’s competitiveness and long-term growth prospects could jeopardise Rome’s access to €200bn of EU funding from the bloc’s Covid-19 recovery programme, they say.

Goldman said this week it expected the difference in Italian and German 10-year yields to widen to 2.5 percentage points by the end of the year from about 2.3 points currently because of “the combined effect of rising political uncertainty and a potential loss of policy continuity at a critical juncture”. The Wall Street bank previously forecast a year-end spread of 2 percentage points.

The ECB last week unveiled a bond-buying instrument to “counter unwarranted market dynamics” that threaten stability in the eurozone. Policymakers worry that the unwinding of its stimulus programmes could have an outsized effect on the borrowing costs on countries such as Italy, Spain and Portugal.

But the ECB is unlikely to use its new measures to tackle self-inflicted problems caused by political volatility, analysts said. “To begin with, they don’t really want to use the tool at all. A political crisis is the exact opposite of the circumstances where they want to use it,” said Antoine Bouvet, senior rates strategist at ING. 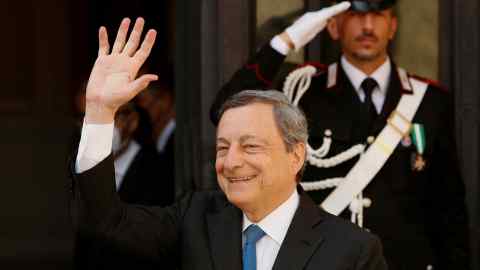 Peter Schaffrik, global macro strategist at RBC Capital Markets, said the ECB was more likely to use its new tool if jitters over Italian debt spread to bonds of other indebted eurozone countries.

“If the [Italian-German] spread goes over 2.5 percentage points and others are rock-solid, the ECB would say it’s an Italian problem,” he said. “If it starts impacting everyone else . . . they’d say we have an issue with fragmentation.”