Start a 4-week trial
How To Spend It  Style

Nine looks to sparkle in

Sequins have never been worn casually. Used by designers from as early as the Bronze Age – spangled robes were found in Tutankhamun’s tomb – they have historically been synonymous with riches and revelry. (It’s no coincidence that the word “sequin” is derived from zecchino, the name given to 13th-century Venetian gold coins.)

In 2021, sequins have become less about displaying wealth and more about embracing liberty. There was Timothée Chalamet in head-to-toe embroidered Haider Ackermann at the Venice Film Festival, his structured crewneck glittering among a sea of traditional suit jackets. Actress Michaela Coel also embraced the all-over shimmer in a royal-blue Balenciaga one-piece to express the Met Gala’s “American Independence” theme. On the catwalks, meanwhile, sequins have covered coats, dresses and separates. Their irreverence denotes a season defined by punchy colours.

For New York-born, London-based designer Michael Halpern, “being able to put on a sparkly frock” is an inherent part of his collections – this year more than ever. “People want to really feel that full fantasy,” he says. Halpern’s current offering combines his signature embroidery with looser shapes: airy dresses, jumpsuits and palazzo pants. In other pieces sequins form structural patterns – “a bricklay motif” – that Halpern likens to structured tailoring. “It feels more refined, more severe in a way,” he adds.

This season has seen numerous takes on sequins – and not just at glitzy events. For Louis Vuitton’s resort collection, heavy beaded separates were worn with striped jersey cardies and aviators; Prada has a scoop-neck knit dress embroidered with serpent-like green scales; and Gucci’s chevron-printed midi skirt pairs round rainbow sequins with a vampy lace corset and riding boots – a case for counteracting girly with glam.

“There’s something about glitter,” says fashion historian Aileen Ribeiro. “It can be costly or cheap, but makes one noticed, makes one stand out in a crowd.” She points to the Baroness Curzon of Kedleston’s early-20th-century peacock dress, a design woven with gold thread, feathers and shiny green beetle wings (symbols of high status). Her embellishments aren’t too dissimilar to more recent looks – see Alberta Ferretti’s autumn/winter finale, where shimmering ovoid sequins blended with light tufts of black feathers on an opulent co-ord set.

Libby Page, Net-a-Porter’s senior market editor, has seen a notable uptick in glamorous purchases, as customers “continue to embrace a positive attitude for the new season in celebration of the uplifting power of fashion”. Evening separates by Valentino and Isabel Marant have proven popular, as have spangled accessories such as Gucci’s GG Marmont sequin bucket bag. Page is an advocate for a more subtle approach to sequins. “I’d style mine with a pair of simple strappy black sandals,” she says. “I also love the idea of an elevated simple white T-shirt with a super-short sequin miniskirt.”

Maximalists, on the other hand, might look to pieces by Taiwanese designer CT Liu, whose emerging C+plus Series label makes use of unconventional cuts and fabrics. Recently, Liu has found inspiration in “mysterious ocean creatures”, resulting in a head-to-toe sequin tassel turquoise gown. More mermaid than monster, the gown is Liu’s offering for the season ahead, having designed the look while listening to festive tracks. His artist of choice? Mariah Carey, of course.

How To Spend It
Seven show-stopping party heels 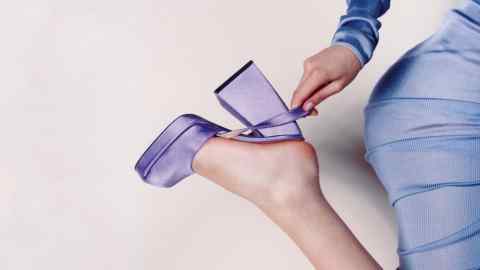