We’ll send you a myFT Daily Digest email rounding up the latest Commodities news every morning.

It’s been a decade since the last commodity market boom, triggered by China’s emergence as a global economic powerhouse, finally ran out of steam.

But a wide-ranging rally that has propelled the price of key raw materials including copper, lumber and iron ore to all-time highs and also boosted agricultural commodities is fuelling expectations that a new commodities “supercycle” has arrived.

But what is a commodity price supercycle and what makes it different from short term boom and bust business cycles?

What is a supercycle?

While there is no agreed definition of a supercycle, it has been commonly used to describe a period where commodity prices rise above their long-term trend for between 10 to 35 years.

The upswing is followed by a downturn of similar duration as supply eventually catches with demand. The result is a full cycle that can last anything from 20 to 70 years.

According to Capital Economics, commodity price supercycles are typically triggered by “some sort of structural boost to demand” that is large enough to “move the needle at a global level” — and to which supply is slow to respond.

In natural resources, there is often a lag between supply and demand because it can take up take 10 years or more to build a big mine or develop a large oilfield.

How many super cycles have there been?

Economists have identified four sustained periods of above-trend commodity prices. The first coincided with the emergence of the US as an economic powerhouse in the 1880s.

Another accompanied the rearmament drive of the 1930s and continued into the reconstruction period after the second world war. The third supercycle was during the oil price shocks of the 1970s, which indirectly boosted the prices of other commodities by increasing production costs.

The most recent price boom took place during China’s rapid industrialisation starting in the late 1990s. This period also saw sharp rises in the prices of agricultural commodities that triggered the 2007-08 food crisis.

The speed and scale of China’s urbanisation in the early 2000s caught the natural resources industry by surprise. Big oil producers and miners struggled to meet China’s seemingly insatiable appetite for raw materials as its entered a phase of dizzying economic growth fuelled by huge spending on infrastructure and the creation of new cities.

As a result copper, which had languished below $2,000 a tonne for most of the 1990s, hit a record high above $10,000, while oil went on to hit $140 a barrel. When supply finally caught up with demand in 2011 and a tsunami of new production finally came online, commodity markets entered a deep funk from which they are only just emerging.

Has another supercycle arrived?

For commodity bulls like Goldman Sachs, the answer is a resounding yes. They argue the coronavirus pandemic has ushered in a new era of commodity-intensive growth, as governments put greater emphasis on job creation and environmental sustainability rather than the focus on financial stability that followed the 2009 global financial crisis. 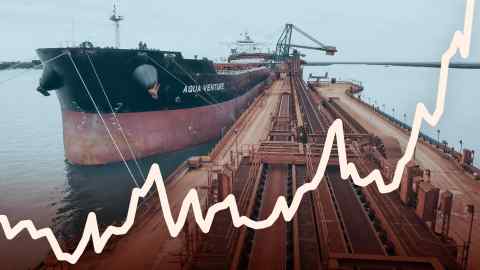 They point to President Joe Biden’s $2.3tn American Jobs Plan and Europe’s Green New Deal as evidence, both of which will pump huge amounts of investment into commodity-intensive infrastructure and projects aimed at meeting the goals of the Paris agreement on climate change.

At the same time, commodity bulls highlight how years of low prices have prompted producers to curb spending on new projects and expansion, crimping supply. “I believe we are in for a supercycle. We don’t have many shovel-ready projects,” said Ivan Glasenberg, chief executive of Glencore, one of the world’s biggest miners and commodity traders, at a recent FT summit, referring to copper.

This is not only true of the mining industry, where investment has been slashed after a brutal market downturn in 2014, but also oil, where many companies are looking to transition away from fossil fuels to renewable energy. Some Wall Street banks argue that oil demand will continue to outstrip supply growth in the coming years, potentially creating one last price surge before electric vehicles cause consumption to peak.

In agriculture, Chinese demand and biofuels are boosting the price of grains and oil seeds. China’s corn demand looks to be on a new trajectory as it looks for imports to feed its livestock. At the same time the focus on renewable energy in several countries is putting the spotlight on biofuels produced from agricultural sources.

Are there reasons to be sceptical?

Yes. For many economists the sizzling performance of commodities from the Covid lows of 2020 is just a cyclical upswing driven by the huge fiscal and monetary response to the pandemic.

They say it lacks the compelling structural demand story that drove previous supercycles and that the global green energy transformation will not emerge quickly enough to offset the impact of slowing Chinese growth, where pandemic-era stimulus is already being withdrawn.

To the extent there is a broad commodities rally, the sceptics reckon it will be focused on a small group industrial metals such as copper, cobalt and nickel, which are key to energy transition and where new projects are in short supply.

Get alerts on Commodities when a new story is published