It wasn’t until she was in her teens and came across her mother opening an eBay package containing an original 1970s Laura Ashley dress that Lily Ashley registered that her grandmother had been a big deal. “It was this old Victorian-style long dress and it had the original big square label inside. I loved it,” she recalls. “I don’t think Edie and I really knew the depth of our heritage until then.”

These days Lily, 30, a performance artist and writer and Edie, 25, a fashion designer and artist, are fully fledged Laura Ashley fans. When we meet, Edie is wearing an unusually utilitarian Laura Ashley two-tone orange cotton tunic that she found on eBay. Lily, meanwhile, has a penchant for the Victorian revivalist frocks. “I now think they were all made especially for me,” she laughs. “I’ve got this annoying obsession with them. I think it’s the punkest thing ever to be wearing the dresses from the ’70s; I love everything about them.”

Laura Ashley started humbly in 1953, when Ashley and her husband Bernard began hand-printing textiles at their flat in Pimlico. They went on, through the ’70s and ’80s, to become a huge British retail success story, a global lifestyle brand romanticising English nostalgia in clothes and homeware. At its peak, entire houses were decorated in Laura Ashley wallpapers, bed covers, cushions, curtains and festoon blinds. Its pretty chintziness paved the way for Cath Kidston and other home design brands, but Laura Ashley was the original cottagecore.

Laura died in 1985, before Lily and Edie were born, but their late grandmother was nevertheless an almost tangible presence in their childhood. “Dad [Nick Ashley, one of Laura and Bernard’s four children] talked about her all the time. Even though we didn’t really know her body of work and the kingdom that she’d created, we really knew her as this amazing spirit,” says Edie. “All of our cousins felt the same. We never met her but we felt very connected.” The family shares a spirituality that is strongly connected to the countryside, nature and their forebears. “Sometimes we’ll see dad looking at a bird and he’ll tell us that he can sense his mother watching,” says Lily. “And if we ever do something and he says it reminds him of Laura, we always feel very proud.”

Nick Ashley, a menswear designer in his own right who has had stints at Dunhill, Tod’s and Private White VC, went to Central Saint Martins and was only 21 when he joined Laura Ashley, spending 15 years at the helm bringing the company to its height. (A major stake was later bought by a Malaysian retail group, before it went into administration in 2020 and closed its stores. Its clothing, homeware and accessories are now sold through Next.) Together with his wife, Ari, a photographer, they provided an idyllic country life for the family in rural Powys. The way the sisters recount their childhood sounds like a slightly more leftfield version of Dodie Smith’s I Capture the Castle.

Ari is a passionate animal lover and horsewoman. When she was younger she performed on stage with her dog. Today she continues to travel locally by horse and trap. She taught her daughters harness or sulky racing. Lily, who studied at Central Saint Martins and the prestigious theatre school Philippe Gaulier in Paris, has inherited Ari’s love of performance. “My mother could have been a star, but she has no ego in that way,” says Lily. “She is pure intuition and inner child.”

Nick, a motorhead, has always been interested in avant-garde fashion. “He’d go on these trips to Japan and come back with vintage clothing for us that we always thought was really disgusting,” says Lily. “Two years later we’d realise how cool this thing was and we’d wear it non-stop. He once gave Edie this samurai underwear and we were like, ‘You bought her a nappy?’ And then one summer she started wearing it and it turned out to be the most sexy elegant miniskirt ever.” Edie has adopted both of his passions. She’s a dirt‑bike racer whose graduate fashion collection at Kingston University was inspired by motorcycling, horses and caring for the land. In 2019, she launched a collaboration at Paris Fashion Week with Bolt motorcycles that was sold at MatchesFashion.

Both sisters live in London now, but they feel a continual pull back to Wales. “It’s that beautiful Welsh word, hiraeth,” says Lily, which loosely translates to homesickness in English. “I think it’s good to have that pull, the longing to be there,” says Edie.

Lily’s next project is an online show with Sapling Gallery in Mayfair, launching in June, called Playing Catch with Nature, inspired by her childhood in Wales. She regularly performs with her boyfriend Hugo Hamlet under the name Voo Le Voo. In 2019, they took their two-hand absurd comedy, The Slinks, to the Edinburgh Fringe Festival’s Underbelly. She’s also a dab hand at writing poetry, which she does as part of the collective Little Grape Jelly alongside Grace Pilkington and James Massiah, and in drama – she’s recently completed a screenplay for a feature film to be directed by the French-Polish actress Morgane Polanski. 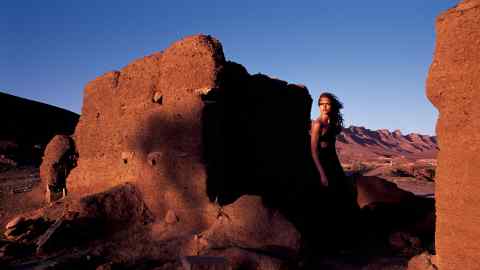 Edie is currently working with Vivienne Westwood on the designer’s charitable foundation and regularly collaborates with artists on video shows and performances. She was costume designer for James Blake’s 2019 music video for “Can’t Believe the Way We Flow”, directed by Frank Lebon, and is working on a show about clothes and nature with the artists Joel Kerr, Finlay Abbott Ellwood and William Waterworth. Next up, they are both working on a big Ashley family project – a collaboration between the sisters and their father for the cashmere label Brora, launching in the autumn.

After the shoot, Lily tells me how much she enjoyed being photographed in vintage Laura Ashley and an old Chloé dress that had once belonged to her grandmother. She adds that the following day, she and Edie were talking in the studio where all the clothes had been during the shoot, when a bird flew in. “She refused to leave and just stared at me and Edie. It was very moving.” She doesn’t elaborate. She doesn’t need to.