The loud, louche cool of Casablanca

From a €3,000 investment Charaf Tajer has taken his brand to a turnover of €40mn. He explains why his optimistic vision is working

As opening gambits go, Paris-born designer Charaf Tajer’s is unequivocal. “We’re looking at the beauty of the world,” he says of his brand Casablanca, which he founded in 2018. Through it he’s cultivated an energising – and immediately recognisable – visual language with louche, maximalist designs for men and women and the occasional nod to glam ‘80s styling.

It’s a highly curated aesthetic that is chiming with shoppers – particularly millennials and Gen Z. Tajer started the brand with an initial outlay of €3,000, launching at Paris Fashion Week with appointments held in his mother’s living room; today, he employs a team of 60 and turnover is more than €40mn, growing 100 per cent year on year.

Before launching Casablanca, the 37-year-old was a partner in Parisian creative collective Pain O Chokolat, co-founder of clothing label Pigalle, and he also launched the hit nightclub Le Pompon. He’s had no formal training in fashion design or brand building; Tajer puts Casablanca’s rapid growth down to his singular point of view. “I think we all have this little voice inside us that we sometimes mute because society is saying something else,” he explains. “I think you find happiness when you listen to that voice without any compromise. When I launched Casablanca, my instinct was going against everything I saw in the fashion world.”

To Tajer, much of the fashion industry had become clichéd and was in dire need of positive energy: “Counterculture has almost become Starbucks,” he says. “For me, the world needs idealism more than dystopia.” Casablanca isn’t countercultural, but it’s certainly eclectic. Alongside his French-Moroccan roots (the brand is named after the city in which his parents met), Tajer draws on a heady mix of design movements and his own broad travels (he’s been to Japan 26 times alone) for his collections. “I’m very into brutalist architecture, I love art deco, I’m really into classic French and Parisian design, and the Memphis Milano movement, but it’s all about the mix,” he explains. “I like to take things like these and use them to create the new.”

Casablanca’s current autumn-winter collection, called Le Monde Diplomatique, celebrates the golden era of French aviation. Brocade-trimmed bell-boy jackets meet drainpipe trousers and horsebit loafers; Princess Diana-esque checked jackets mix with bright candy colours; and maximalist gold-buttoned pilots’ blazers are inspired by Concorde’s red, white and blue livery. For his next spring-summer collection, entitled Future Optimisto, Tajer references his travels to Mexico, with pumped-up Vaquero style, stetsons and technicolour western shirts. “If Casablanca was a car, it would be a classic Mercedes […] and if it was a music genre it would be bossa nova. It has the classic, but also some of the exotic,” Tajer adds. His creations are more elevated than streetwear, and while there are clear resortwear accents, the brand delivers a full-look, year-round offering.

“Charaf has both a clear and ambitious vision of what he wants to achieve, and a community of artists and creatives whom he has gathered around him from his past life in fashion and music,” says Sophie Brocart, CEO of Patou and Tajer’s mentor for the LVMH Prize, which he was one of eight finalists for in 2020. “Instead of creating a streetwear offer like many others with links to music, he followed his intuition and went to create a luxurious, colourful and joyful collection [which] hit a chord with his community, and with the celebrities who rushed to wear Casablanca,” she says. “I also think Casablanca is the right brand at the right moment. It evokes escapism at a time when men, particularly in the US, have started to wear bolder, less conventional silhouettes and move out of streetwear.”

Tajer himself is crystal clear on the brand’s positioning, and on his role as a French creative director. “I grew up looking at and loving Cartier, Chanel and Hermès. Being from Paris [Tajer was born there, after his parents moved from Morocco], I feel like I have a direct link to their aesthetic and savoir faire,” he says. “I’m focused on the idea of luxury without any compromise.”

If Casablanca were a music genre, it would be bossa nova

Tajer and his team work as a unit from the brand’s studio in London, where he is now based, to create every sample that makes it into a finished collection in-house, before passing those samples to his chosen manufacturers, each of which is heavily vetted. One day, adds Tajer, he’d like to have his own factories to control the whole process from start to finish. “The thing that makes Casablanca special to me is Charaf’s dedication to doing things the right way,” says model and creative director Richard Biedul, who walked in Casablanca’s SS23 show. “Whether it’s the fabrication or the construction of the garment, it’s always done by the best people.”

Since 2020, Tajer and his team have partnered with New Balance on three limited-edition sneaker models, and in April this year worked with Bulgari to produce Après Tennis, a range of luxury women’s bags inspired by the golden age of court-side style. In September, Casablanca’s first collaborative range of Globe-Trotter luggage was released too. Now the team has moved beyond collaborations to launch Casablanca’s first in-house sneaker, the Atlantis, this month.

Tajer’s creativity doesn’t turn off when he leaves work each day. His home is in many ways an extension of the Casablanca aesthetic, with his passions for architecture and furniture design, and markers of his Moroccan heritage, all on show. “Interior design is very important to me. Home is a space for the wellbeing of my family. It’s also a place that isn’t ‘over-visual’ because I always need the space to be inspired. I don’t want to over-saturate myself.”

Despite Tajer’s success, he still feels like an outsider to the predominantly white fashion scene, and wants Casablanca to be a vehicle for change. “I’m still unusual in the world of design,” he says. “I’ll feel like less of an outsider the day there are more people like me in the design landscape. My work is also to make sure that the demographic changes and our vocabularies change – to allow more people in.” 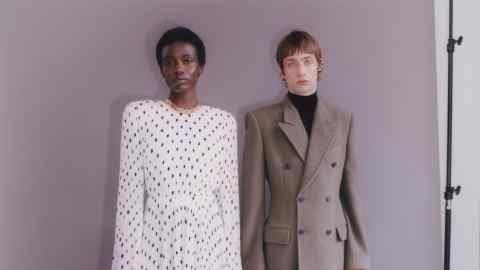 This is an aspiration that was shared by one of Tajer’s close friends, the late Virgil Abloh, for whom design was also a vehicle to encourage change. Abloh, like Tajer, trained as an architect and had an instinct for mastering different creative disciplines, whether architecture, fashion or music. “I loved Virgil,” Tajer says. “He cared more about the impact he made than doing fashion for its own sake.”

What impact does Tajer hope to have with his own brand, then? “The most important thing for me is to deliver messages about our optimistic future, playing with iconographies and codes to inspire people,” he says. “Today, I’m doing fashion, maybe tomorrow I’ll do something else. The message is all I care about.”