Traders had been waiting on tenterhooks for the decision, which was announced on Wednesday evening following two days of consultations with asset managers, exchanges and other market participants.

MSCI’s emerging markets index is among the most important benchmarks for traders and is another big blow to listed Russian companies. If or when the markets do reopen, the index provider’s decision makes it even more likely that fund managers will dump their Russian stocks.

The moves follow similar decisions from other index providers, cumulatively affecting vast numbers of investment funds that base their portfolios on such indices. MSCI estimates that more than $16tn is benchmarked to its indices. 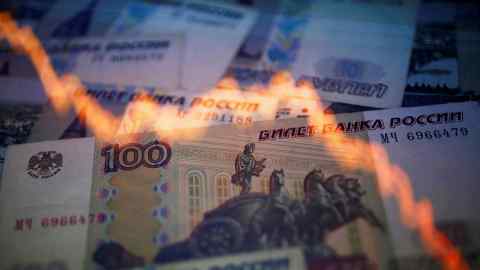 MSCI said the “overwhelming majority” of those involved in the two-day consultation had reported that “the Russian equity market is currently uninvestable and that [the country’s] securities should be removed from” the indices.

The price of Russian stocks listed in other countries have slid greatly, prompting temporary suspensions from the New York Stock Exchange and Nasdaq. Traders have warned of the difficulty in liquidating their Russian assets as sanctions have ricocheted through markets.

On Monday, ICE Data Services said the debt of all entities blocked under UK, US or EU sanctions would be removed from its indices at the end of March.

JPMorgan Chase, another large index provider, is still reviewing its indices. It said on Tuesday that new debt from Russian entities hit by sanctions would not be included in updated indices this month.

Fitch downgraded Russia from triple B to single B, deep junk territory, underscoring the high risks of investing in the country’s debt. Analysts at the rating agency signalled they could cut the rating further.

Fitch said the severity of sanctions placed on Russia in response to its invasion of Ukraine “represents a huge shock to Russia’s credit fundamentals” and could “undermine its willingness to service government debt”.

Moody’s, another rating agency, followed suit, slicing Russia’s rating from Baa3, one notch above junk, to B3, well below the cut-off for investment grade, and put it on review for a further downgrade. Among other factors, it cited the “likelihood of a sustained disruption to the economy and financial sector from the sanctions that limit access to Russia’s international reserves intended to buffer Russia from adverse shocks”.