Nathalie Thomas in Edinburgh and Jim Pickard in London

Millions of British households will be asked to cut back on energy consumption by National Grid this winter, as it warned them to prepare for rolling three-hour blackouts in the “extreme” case of gas shortages and reduced electricity imports from the rest of Europe.

But despite the bleak assessment, Liz Truss’s government has resisted mounting a public information campaign of its own to try and reduce consumption.

“The last thing you want to do is tell someone, you know, switch things off for the national need when it makes no difference to the national security position,” Climate minister Graham Stuart told Sky News on Friday. “We think that we’ve got a diverse, strong supply and in all the central scenarios we’re going to be fine but we plan for everything.”

By contrast, National Grid, which manages Britain’s power and gas systems, will launch a voluntary scheme next month offering financial incentives to domestic customers with smart meters and businesses to reduce electricity usage during peak hours when supplies are tight.

The aim is to try to reduce electricity demand by more than 2 gigawatts when supplies are low, the equivalent output of two of the UK’s fleet of five nuclear power stations.

National Grid it acknowledged for the first time that it would have to impose rolling power cuts in what it described as the “extreme scenario” that generators could not secure enough gas or electricity imports from countries including Belgium and the Netherlands.

Kathryn Porter, an analyst at Watt-Logic, said National Grid’s assessment looked “unreasonably optimistic”, adding that while the company “now acknowledge[d] some chance of supply disruption, it still appear[ed] to be understating the risks”

National Grid published several reports setting out possible scenarios for the winter, as Britain and the other European countries it normally relies on for gas and power imports during the coldest months grapple with what the company called an “unprecedented” energy crisis caused by Russia’s squeeze on natural gas exports.

FT Financial Literacy and Inclusion Campaign
Electricity calculator: how much will your bills cost this winter? 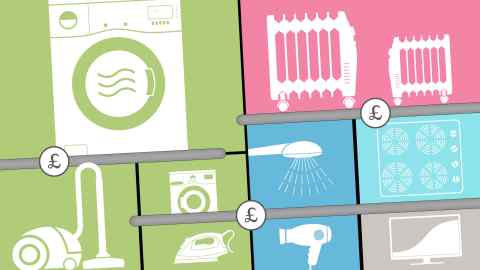 Ed Miliband, shadow climate secretary, said the warning showed the government had left the country vulnerable to an energy shock. “Banning onshore wind, slashing investment in energy efficiency, stalling nuclear and closing gas storage have led to higher bills and reliance on gas imports, leaving us more exposed to the impact of Putin’s use of energy as a geopolitical weapon.”

The UK on Friday fired the starting gun on a new round of what is expected to be more than 100 licences enabling companies to explore for oil and gas in the North Sea to bolster energy self-sufficiency. But regulators say it lasts an average of five years to reach production although they hope the fast-tracked licences could yield results in as little as 12 to 18 months.

National Grid’s emergency blackout plan, under which supplies would be cut off in three-hour blocks in certain regions at different times, would have to be approved by ministers.

The company said it would aim to use the voluntary scheme in a slightly better supply scenario, in which gas-fired power plants were able to operate but it could not secure enough electricity imports. It also warned the country might need gas imports from the continent during any prolonged cold spell.

Analysts are increasingly concerned over EU member states’ ability to supply Britain with energy if they are facing the same weather conditions.

“Is this likely when Europe is very short of gas themselves in cold weather?” said Niall Trimble, managing director of consultancy the Energy Contract Company.

Europe’s gas crisis has also been compounded by problems including outages at France’s large nuclear reactor fleet and low water levels at Norway’s hydropower plants. France, usually a net exporter of electricity in the colder months, recently warned that it would have to rely on imports, including from Britain, over the winter.

National Grid does not ascribe a probability to any of the scenarios. Fintan Slye, executive director of the National Grid subsidiary that oversees the country’s electricity system, said under the base case scenario he was “cautiously confident that there [would] be adequate margins [between supply and demand] through the winter period”.

But he added it was “incumbent on us to also factor in external factors and risks beyond our control, like the unprecedented turmoil and volatility in energy markets in Europe and beyond.” Under the voluntary scheme households could be paid more than £10 a day to reduce their usage at peak times.

George Bridges, Conservative chair of the House of Lords Treasury committee, said it was “critical” that ministers clarified supply arrangements with the EU if there was an emergency.

The assessment by National Grid is likely to increase pressure on the government to follow other European countries and launch a public information campaign to encourage households to conserve energy.

Industry chief executives have privately questioned why ministers have so far refused to do so.

The government said in its own risk assessment of Britain’s security of gas supply — published at the same time as National Grid’s — that the country had a “secure and diverse energy system”, adding: “We are confident in our plans to protect households and businesses in the full range of scenarios this winter, in light of Russia’s illegal war in Ukraine.”