Start a 4-week trial
How To Spend It  Film

A true dive in Williamsburg is a rare find. At Skinny Dennis, a scrappy throwback to Brooklyn’s pre-gentrified days, the floors are sticky as hell, the floridly graffitied bathrooms authentically unreconstructed, and the decor a shrine to country-music legend Willie Nelson. Outside, a young woman in glasses, indigo jeans, nondescript black boots and a big black hoodie pulls up a sleeve to reveal a forearm tattoo of a cowboy hat, confessing herself “a big country-music fan”. Slim Jim – a small, fox-coloured pup of inscrutable breeding – shelters in her lap. There aren’t many honky-tonk bars left in New York, she says, “so it made sense that this would become my local”.

And so it is that Odessa Young, a 23-year-old Australian whose ferocious talents include slipping into androgynous anonymity, introduces me to a Frozen Willie, a confection of milk, coffee and alcohol, served in a paper cup. In other words, a seriously down-to-earth affogato. “Truth serum,” Young jokes. “It’s really revolutionary. And they put a lot of whiskey in it. If I could have a Frozen Willie before every work day, I think I’d be the best actor ever.”

She doesn’t need them. Last year, her star power was confirmed by a luminous and thrilling turn in Shirley, in which she played a young wife enthralled by Elisabeth Moss’s character, the horror writer Shirley Jackson. Now Young carries Mothering Sunday, an occasionally gauzy but affecting drama adapted from Graham Swift’s novel set in England in 1924, with a performance that is generating much awards-season chatter. This, plus forthcoming plum roles in The Staircase, the HBO Max adaptation of the true-crime docuseries, and in psychological horror movie The Damned, are sealing her status as one of the most exciting young actresses today.

I think it’s really hard for female directors to film without the male gaze… It’s a patriarchal gaze, which everybody plays into”

Young, who speaks carefully in an Australian accent softened by years in the States, seems too wise to let any of this go to her head. When I ask how our fashion shoot went, she considers the question seriously. “It’s not my favourite part of the job, and in fact I think a lot of my mission as an actor is to become less and less aware of my face. So much of the culture – that I try to ignore as much as possible – says you’re only paid attention to if you’re beautiful. So, occasionally, it can feel like a step in the wrong direction to lean too heavily into that side of things. But,” she adds, graciously, “it’s a necessary part of it, and there is a great deal of art and creativity that goes into it.”

In Mothering Sunday Young plays Jane Fairchild, a foundling employed in the grand old home of two tightly buttoned and tragedy-ravaged members of the upper classes. The Nivens (Colin Firth and Olivia Colman) have lost both their sons to the war. Mr Niven wears a placid rictus as he remarks again and again, quavering and valiant, on the fineness of the weather. Mrs Niven, by contrast, is immobilised and aghast for spells of time that are broken by quick screeds of rage. Against this backdrop of a marriage voided by grief shines their young maid –discreet and knowing. Young’s beauty is earthy, Botticelli-ish and captivating; there’s a warm realism to the frizz of Jane’s hair or the way a spill of sunlight catches the pale gold hairs on her legs. Her secret lover (Josh O’Connor) is the affable if seigneurial Paul Sheringham. They’re doomed, of course: he must marry a woman of his own station, the brittle Emma.

While three older couples await Paul at a miserable picnic to mark his engagement, he and Jane are revelling in an afternoon tryst; there follow long, utterly frank scenes of naked thrusting. “Having fake sex is awful,” Young laughs. “You’ve got all of the uncomfortable aspects of it – the tiring athleticism and the sweat and uncomfortable positions, without any of the pleasure.” After Paul leaves, Jane is left to her own devices – a prospect even more delicious than the preceding pleasures. Free to roam the house, she does so naked. As she fingers a crumpled flower, or plants herself squarely at the kitchen table to cut and scoff a generous slice of savoury pie, pausing to let out a beer burp, we sense her claiming herself as a creature of sensuality. Young loved “that journey she has into self-realisation”, the sense that the character “had an incredibly rich inner life and she was going to go places with that”.

The “naked meander” (as Young affectionately refers to the film’s centrepiece) also sees Jane enter the cloistered masculinity of a library – you can virtually smell the cigar smoke and self-regard – and sit, purposively, on a leather chair. Young is too intelligent to stray into gender essentialism when it comes to all this: “I think it’s really hard for female directors to film without the male gaze. It’s not even ‘male gaze’ or ‘female gaze’ – it’s a patriarchal gaze, which everybody plays into.”

Young grew up in a bohemian enclave of Sydney with parents who were supportive when she dropped out of performing arts school as a teenager and moved to LA. She spent a couple of years there before relocating to New York three years ago. By 16, she says, “I felt extremely grown-up and extremely independent.” Her dad is a musician, her mum an editor with a background in journalism, and from them, “I got a beautiful dose of both ways of thinking. My father is incredibly romantic and tortured, and he’s all about the feelings and the poetry and the beauty of a moment. And then my mother, who obviously appreciates all these things, is far more practical and logical.”

Her self-possession is remarkable. “I have never believed that I was untalented,” she says. “And I don’t wanna lie about that for a false sense of humbleness – I know that I am a good actor. The only times I have not felt fully talented are when I’ve caught myself being disingenuous. That’s when I believe I’m talented at tricking people but not actually at acting.”

When she senses fear holding her back in a scene, her resolve is redoubled. “I’m like, ‘I need to get better.’” How does she reach fearlessness, then? “Oh man, I wish I knew the answer!” Except, it appears she does: “I mean, you gotta have a mission.” At the start of the pandemic she had, like so many of us, “a bit of a crisis”. She wondered if she might become a poet instead. “I didn’t even know if I could call myself an actor because I’ve always wanted to act and I didn’t want to act.” In short: “I hadn’t sat down and asked myself in a long time what my mission was.”

I ask how she answers that question now. “It’s very elusive and amorphous and it’s hard to articulate but…” She hesitates and gives a small laugh, self-conscious. “It’s also so corny. But I want the world to be a better place, I want people to try harder. I want to strive for radical earnestness and sincerity. I’m trying to do the best job I possibly can and to put my abilities into projects I believe are sincerely endeavouring to make the world a better place.”

How To Spend It
The HTSI expert gift guide 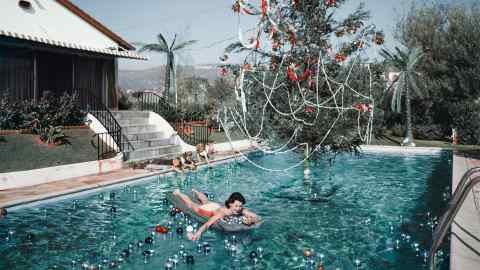 Maybe that sounds a little self-important, she concedes: “I don’t think I’m important but I think I can be if I’m intentional about things.” In fact, this self-belief seems rooted in a healthy sense of her own insignificance. “There’s a real privilege and beauty in that – in realising you’re here for a tiny fucking blip. That’s why I’m like, we’re not here to have fun, you know? We’re here for a reason.” And then she polishes off the last of her Frozen Willie through a straw.

Mothering Sunday opens in the UK on 12 November

Get alerts on Film when a new story is published