Thyssenkrupp to shrink radically in drive to survive

Thyssenkrupp will transform from a sprawling conglomerate into the “leanest possible” holding company, as it drives through a radical restructuring plan that could leave it with at least 20,000 fewer employees and result in its steel arm merging with a rival.

As the coronavirus crisis adds to its mounting debts, the beleaguered German group will put businesses with a combined annual turnover of approximately €6bn up for sale, including its stainless steel plant in Italy and plant-building unit.

Despite the collapse of a merger with rival Tata Steel last year, the Essen-based company confirmed that it was in discussions to consolidate its ailing steel business, and said it would seek partners for its shipbuilding division.

Martina Merz, who in September became Thyssenkrupp’s third chief executive in just over a year, said the company was “conducting talks in all directions in the steel sector”, which was plagued by excess capacity even before the outbreak of coronavirus.

But she added that Thyssenkrupp had learnt from the failed Tata deal “not to commit ourselves to one option too early”.

The steel unit, which lost close to half a billion euros in the past six reported months alone, will therefore be simultaneously developed as a standalone business.

The decision to accelerate the break-up of Thyssenkrupp is a vindication of the arguments made by activist investors Elliott and Cevian, who for years pushed to abolish the conglomerate’s integrated structure in favour of a looser holding.

After abandoning an attempt to split the business in two, Thyssenkrupp, once a symbol of Germany’s industrial might but now saddled with €7bn in debt and enormous pension liabilities, sold its single most profitable unit earlier this year.

The €17.2bn deal for the lift and escalators business, reached with private equity groups Advent and Cinven, is due to be completed by the end of Thyssenkrupp’s financial year in September.

Ms Merz told reporters she believed there was “no risk” that the transaction, which still needs to be approved by the European Commission, would not be completed in time. 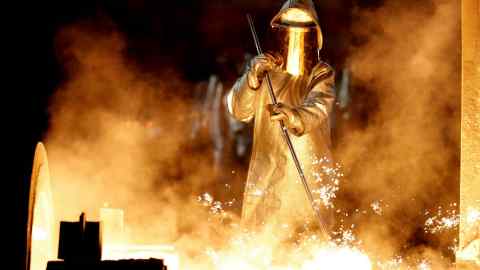 The remaining units for which Thyssenkrupp sees “no sustainable future” will be bundled together and separated from the company’s main balance sheet, and put up for sale.

Alan Spence, an analyst at Jefferies, said he “wouldn’t be surprised if this is not the final plan”, because Thyssenkrupp may still have to rid itself of smaller underperforming companies, particularly in its automotive division.

The Krupp Foundation, which owns almost 21 per cent of Thyssenkrupp and remains its largest shareholder, said it supported the measures, despite being mandated to protect the integrity of the company.

“We have confidence in the executive board and expect it and all management teams to pursue the announced course with vigour,” the foundation said. “Thyssenkrupp has no time to lose.”

Lars Forberg, founding partner of Cevian, which owns 18 per cent, said the announcement marked an “important step” for Thyssenkrupp, adding that it was “now crucial that this plan is implemented with urgency and decisiveness”.

Get alerts on Thyssenkrupp AG when a new story is published