The tie is back – but can you pull it off?

How to wear this season’s boldest accessory

A certain level of chutzpah is required of women who wear ties. Just look at the line-up of those who are, or have been, fans: Diane Keaton, Marlene Dietrich, Patti Smith, Diana, Princess of Wales, and Alexandria Ocasio-Cortez, to name a few. When Madonna returned to the world of music in April 2019 (after a four-year hiatus) with the single Medellín, the accompanying video found her wearing a corporate-looking tie styled over a white shirt. The message was clear: Madonna meant business.

On the autumn/winter 2020 runways, designers tapped into the same assured energy. Miuccia Prada offered “a consideration on the strength of women”, which she did via military-style workwear – structured wool blazers, knee-length pleated skirts and wide suit trousers – juxtaposed with colourful kipper ties in pretty candy-hued pinks and blues. At Alyx, skinny black-leather ties were worn over crisp white shirts. Dolce & Gabbana delivered wide styles in spots and stripes.

Dior’s creative director of womenswear, Maria Grazia Chiuri, has used the catwalk to explore all sorts of gender narratives since her “We Should All Be Feminists” T-shirt debut in 2016. For her autumn/winter 2020 show, she enlisted the artist collective Claire Fontaines to create neon signs flashing the words “when women strike the world stops” and “Consent. Consent. Consent” above the catwalk, and her opening look starred a tailored navy wool blazer with matching fitted trousers, a cream striped shirt and a black office tie. The neckwear, fabricated in layered chiffon, was a recurring motif throughout the show.

For women, wearing a tie makes for a curious sartorial paradox. On the one hand, it’s the ultimate expression of corporate homogeneity. The uniform of the office drone. And many of us will recall its place in our school uniform – for some a proudly worn badge of belonging, for others a symbol of conformity against which one might rebel.

Heather Gramston, head of womenswear at Browns, says consumers are keen to try this power look: “We’ve seen a resurgence in women wearing tailoring as a trend. Adding a tie is the natural next step. We predict that the skinny leather tie from Alyx, worn with the skinny suit à la Bella Hadid in the autumn/winter 2020 show, will be our most popular when it launches.”

For New-York based designer Thom Browne, the tie blurs gender. “I am always interested in pushing the boundaries between the masculine and the feminine,” he says of the striped boater ties he used in his autumn/winter 2020 collection (of which there were a whopping 64). Both men and women were dressed in matching suits, coats and blazers – Browne’s signature – and their faces were shrouded by animal-themed masks. “For the ties, I used fabrics from the garments and traditional silk repp stripes,” he says. “The inspiration was for the man and the woman to look identical, to stretch peoples’ notions of sexuality.”

Other designers put their own unique spin on the accessory. At Saint Laurent, creative director Anthony Vaccarello sent 30 models down the catwalk in voluminous bows of colourful chiffon in fuchsia, red and yellow. Maison Margiela’s John Galliano tied giant bows around models’ necks and riffed on the cowboy’s bolo tie.

Paris-based couturier Bouchra Jarrar has been drawn to ties ever since she discovered archival designs in the basement at Balenciaga while working there in the late 1990s. “The tie came to symbolise protection for me,” she says. “It expressed strength.” For the first digital haute-couture fashion week in July, she presented her collection with a short film featuring a diamond-studded tie styled over a beautifully cut black shirt. “I used the tie for my work to create volume around the body. I wanted it to wrap up the silhouette of a woman,” says Jarrar of its playful proportions. 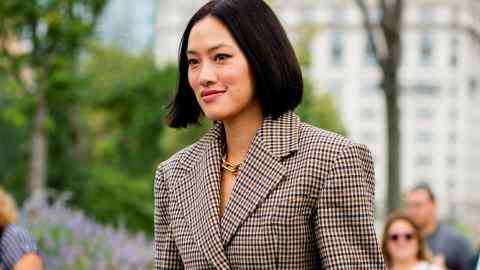 If you can’t tie a tie, don’t be disheartened – just head to the nearest Gucci store, where maximalist Alessandro Michele has designed silk crepe-de-chine blouses with ties in matching fabric built into the collar. No one will ever know.

As for how to style it? “Honestly, I don’t think it’s such a big deal for a woman to wear a tie,” says Browne. “All she must do is be her absolute self.”