If you think the same, join us
How To Spend It Food & Drink

Will everyone still love Langan’s?

Joan Collins said it best. Doesn’t she always? “Langan’s was to the ’70s and ’80s restaurant crowd what Tramp was to the nightclub scene in the same decades,” she declared. “Anybody who was anybody lunched or dined there.” The dining room of the London Mayfair restaurant was arguably the best in town, with its tall windows and impeccable sight lines. Everybody should be able to see each other, co-founder Peter Langan said: “When you walk in, you are the star. When you sit down, you are the audience.”

But after Langan died in 1988 and his partners Michael Caine and chef Richard Shepherd traded in their shares, the place soon faded. Last year, the restaurant went into administration. This month, with a new team at the helm, it is being revived. Graziano Arricale (previously of The Birley Clubs and also behind Chucs) and James Hitchen (former CEO of Manchester restaurant group East Coast Concepts) were the only bidders committed to retaining the Langan’s brand. After consulting on the layout with Fettle Designs, the pair also turned to Australian-born designer Peter Mikic to “reimagine the ’70s and ’80s heyday of the restaurant for a new generation”, as Mikic puts it.

Mikic has previously worked on restaurants for Chucs and private homes and yachts for clients including Elisabeth Murdoch and the Candy brothers. His scheme for Langan’s makes a statement while pulling back from the exuberant maximalism ubiquitous in Mayfair. The vista into the main dining room packs a punch, though, with green leather banquettes (inspired by Joe Colombo’s modernist Elda lounge chairs), sage green Venini chandeliers and green marble tables. Arricale and Hitchen originally toyed with having a curved banquette down the middle of the room, but old photographs convinced them “round tables were a big part of the business”, says Arricale. “All of the best photos were of round tables with famous people around them. We needed to preserve them.” At the far end, a seafood bar provides a focal point, with a curved stainless-steel overhang reflecting back across the room.

In keeping with the original art-filled restaurant, the walls play host to pieces by British names such as David Hockney, Rose Wylie, Yinka Shonibare, Martin Creed and Cecily Brown, with a specially commissioned mural by France-Lisa McGurn. The cockerels on the bronze staircase – which is listed, along with the neon-signed entrance – provide the inspiration for the graphic on the menus, matchboxes and coasters by designer Annie Atkins, best known for working on Wes Anderson’s films.

On the ‘non-stop’ insistence of Langan’s regulars, the signature dish of spinach soufflé with anchovy sauce remains

The great showpiece is upstairs. The invite-only lounge with two bars, DJ station and a 3am licence brings to mind Studio 54, with its red walls, patterned carpet and marshmallow sofas that “you can imagine falling over and not hurting yourself”, says Mikic, anticipating socially un-distanced spills that will surely ensue.

As for the food, the British-French brasserie menu overseen by chef Julien Jouhannaud (formerly of Annabel’s) promises everything from native lobster Marie Rose salad to ribeye steak Diane, roast Norfolk chicken and crêpes Suzette. On the “non-stop” insistence of Langan’s regulars, the signature dish of spinach soufflé with anchovy sauce remains. Of the dishes I try, I particularly enjoy the Scottish salmon with creamy sorrel sauce and confit lemon. The classic “Bangers & Mash” has been deconstructed and Frenchified, with foie gras and veal, chicken and Italian sausage meat wrapped as a crépinette, served with pommes purées and black truffle Perigord sauce. It’s impressive but a little rich after I’ve gorged on the fish pie with prime cuts of cod, prawns, haddock, scallops and wild salmon, which is obscenely good. I also make room for the tarte tatin, a triumph.

How To Spend It
The next best table in London? 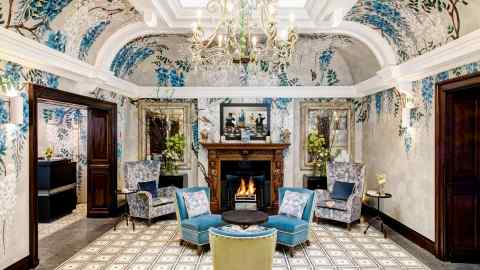 Some might argue it was neither food nor design that made Langan’s a destination. Langan himself was a draw. His wild antics were legendary. He once climbed onto Princess Margaret’s table and fell asleep. While nostalgia won’t guarantee success, a long-standing affection for the place remains. And not just among celebs. Recently, Arricale took a taxi to Langan’s and the cabbie warned him it was shut. Not for long, Arricale explained. “The driver was overjoyed,” he recalls, “because he’d met his wife here. That’s what I love about Langan’s. Everyone has a story.”