The most difficult moment in my interview with Charlotte Wells has arrived. I have just tentatively asked how much of her gently shattering film about father-daughter love, loss and grief is autobiographical. The room is charged with the expectation of revelation. Instead, in true British fashion, the talk turns to tea.

“This doesn’t work at all,” the Scottish first-time director says, fighting valiantly with a teapot. “I’m not avoiding your question — it’s just going all over the tray.”

As a metaphor for the difficulty of giving vent to painful emotions, a spout clogged with leaves is almost too apt. Certainly nothing so obvious is to be found in Wells’s beautifully understated feature debut Aftersun, which premiered in Cannes to ecstatic reviews and was recently nominated for 16 British Independent Film Awards. When we meet during the London Film Festival, she is still processing the Cannes experience, where she came away with a jury prize in the Critics’ Week section.

“It had never crossed my mind what would happen when the credits rolled,” the Edinburgh native says in a gentle burr, her voice occasionally fading to a murmur. “I’m a person who constantly thinks ahead, so I’m not sure why I hadn’t, but I hadn’t. It was a huge surprise that people liked it, were moved by it and found it legible. When you make a film that is so avoidant of exposition, there is a fear that it might not be logical.”

Aftersun, on the surface at least, follows a thirty-ish father and his 11-year-old daughter on a humdrum package holiday to Turkey. Calum and Sophie spend their days sunbathing and swimming, eating and drinking, little more. Yet surface is the least interesting thing about the film. What fascinates is how Wells frames the everyday to reveal a subtext of which Sophie herself is only dimly aware.

In its own quiet way, it is audacious. With debut features serving as a calling card for their makers, they are usually flashier. Playing it so low-key shows a remarkable confidence and maturity.

My relationship with my dad was the starting point, wanting to capture the warmth and love in the context of the grief I experienced’

“This was always the first film,” Wells says. “I was quite uncompromising about that and I was willing to fail trying. There were moments in the edit when it felt like we were failing, but at least it felt true to what I was trying to express.”

To those reading the runes, there were signs that Aftersun might become something special. One was the name Barry Jenkins on the credits, the Oscar-winning director of Moonlight serving as a producer. “An amazing person to have in my corner,” enthuses Wells, who lives in New York.

Another was the presence of Irish actor Paul Mescal, whose performance in the TV adaptation of Sally Rooney’s Normal People captivated housebound viewers during the Covid lockdown of spring 2020. (This week he was nominated for best actor for Aftersun in the European Film Awards.) However, this too started as a gamble, with Mescal unable to meet his young Scottish co-star Frankie Corio — now 12 — before the shoot due to pandemic restrictions. Doesn’t a film like this rely heavily on the chemistry of its leads?

“It depends entirely on that,” affirms Wells. “They had spoken on Zoom and I’d met Frankie twice, but I’d never met Paul in person before we got to Turkey. That is a really scary way to cast. I’m not a person who thinks that’s fine . . . but I also love the points in making films where you have to place absolute trust in other people.”

One thing that made this easier was that Corio, making her debut, exceeded all expectations with her seemingly effortless naturalism. “Frankie walked into the room and started performing in a way that is just wholly unexpected from a kid,” Wells says. “That gave me a lot of confidence in my own ability to help them build that relationship once they got to Turkey.”

The actors were wisely given two weeks to bond before shooting began, resulting in an intensely authentic rapport that seems to radiate from the screen.

“There was a line in the script that described his broken hand resting on her with effortless intimacy. That was such an easy line to type. But to actually portray it? It ended up being the last thing we shot in Turkey. I remember Paul saying, ‘We never could have done this in week one.’”

And so we arrive at the awkward question about how much of Aftersun is based on Wells’s own experience.

“I used the phrase ‘emotionally autobiographical’ early on and it’s haunted me ever since,” she says. “There’s no question that my relationship with my dad was the starting point, wanting to capture the warmth and love of that within the context of the grief that I experienced and maybe hadn’t fully dealt with when I was a teenager . . . The film came from a place of trying to understand something myself and articulate a feeling.”

One of the joys of meeting someone who is still on the cusp of fame is that little is known about them. I ask Wells to shed some light on her background and how she came to film-making.

“I grew up with a £9.99 Cineworld pass, watching whatever was on, mainstream British and American films,” she says. “It took me a long time to be ready for the type of cinema that I spend most of my time watching now. I wasn’t a precocious 13-year-old watching Ozu.

“I stood up in my English class aged 14 saying I wanted to be a director,” Wells continues. “I had no concept of what that really meant except loving going to the cinema. And watching television. I’d be lying if I if I denied it — that was a part of what drew me to moving images.”

What was her favourite TV show growing up? “That’s a more exposing question than: tell me about the death of your father!” says Wells in what seems to be a combination of mock and genuine horror. She promptly returns to the intransigent teapot — “this is really . . . I give up” — before divulging this most intimate secret. “Buffy the Vampire Slayer meant a lot to me as a teenager,” she says without further comment.

Then comes a burst of highlights from her CV, surprisingly varied for a new film-maker. “I studied classics at King’s College London and seriously considered pursuing that further and ended up in financial services and then running a company called Digital Orchard, which now does a lot of film work. I used that experience to apply to the MBA/MFA programme at New York University with an eye to producing.” (I later discover that she also found time for an MA from Oxford.)

Trying to square all of this with her presumed age, I say she has packed a lot into her young life. “Yeah, well, I’m not the precocious 20-year-old that people tell me I look like. I have to disappoint them that I’m not some teen film-making prodigy . . . I’m 35.”

As Philip Roth observed, getting people wrong — again and again — is a common human pastime. Fittingly, this is something also eloquently captured in Aftersun, most of which plays out in flashback, the 1990s past illuminated by the glow of hindsight, with snatches of DV-cam footage evoking both the era and the sun-kissed haze of holiday memories. Best of all are the ellipses the film elegantly leaves, gradually drawing the viewer in with its woozy atmospherics and unspoken questions. 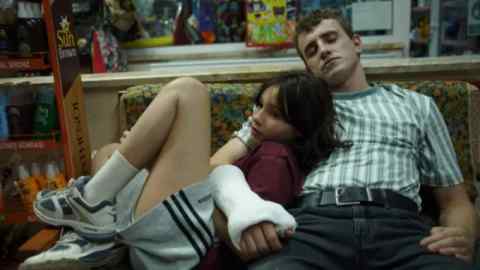 “I do have an aversion to a [certain] type of exposition,” Wells says. “And not only do I accept that, I like it. It’s not without effort, but it is innately what I do. It leaves space for you to bring your own experience. And I think you have to have that space to emotionally connect and feel. Film is a feeling medium.”

As the five-star reviews and awards nominations pile up, Wells is allowing herself some space to take it all in before planning her next project. Perhaps that is what comes from being a wunderkind with a generous dose of life experience.

“I’m just trying to enjoy the moment,” she says. “I look forward to the day that I make coffee, sit down at my desk with a blank page and discover what’s next. It might take me a minute, and I think that’s OK.”