We’ll send you a myFT Daily Digest email rounding up the latest Mining news every morning.

Another cash bonanza is in prospect for shareholders when the world’s biggest miners start to report results this week.

Anglo American, BHP, Glencore and Rio Tinto will announce cash returns that could approach $25bn alongside figures for the six months to June — one of the biggest payouts on record, according to UBS.

But this may be the last time they fully open the cash taps for a while as the outlook darkens for the global economy and the sector’s margins are squeezed by falling commodity prices and rising costs.

“A material drop in prices in a high-inflation environment is something the mining sector hasn’t seen for at least 20 years,” said Jean-Sébastien Jacques, former chief executive of Rio. “This could become very tricky and will test the industry’s mettle.”

Raw material prices were riding high earlier this year as production struggled to keep pace with a recovery in demand as the global economy recovered from the pandemic crash. Copper, for example, hit a record high above $10,600 in March.

Two months later, prices slammed into reverse amid fears that aggressive rate rises by central banks, mounting Covid-19 cases in China and the prospect of Russia cutting off European gas would hit demand for metals and minerals.

Copper has since fallen back to around $7,600 a tonne while iron ore, the main source of profits for BHP and Rio, is trading just above $110 a tonne, down from $140 in May.

“After what was an incredibly difficult first half of the year for equities and bonds, energy and materials were the last thing left standing and the last thing to be sold,” said James Johnstone, co-head of the emerging and frontier markets team at Redwheel. “It’s been a pretty remarkable sell-off.”

Those falls have weighed heavily on share prices with Anglo, BHP and Rio, which reports first-half results on Wednesday, all in negative territory for the year, having been up as much as 30-40 per cent.

Only Glencore has managed to buck the trend, helped by its exposure to thermal coal — one of the few commodities to escape the recent rout. For that reason, analysts reckon the company could continue for longer with big cash returns.

Despite the sharp declines, average commodity prices over the first half of the year were still high, paving the way for another set of bumper dividends for the first half of 2022. It is what happens next that is weighing on the minds of analysts and investors.

“There will be a very high cash payout for sure but this will be the last of the big returns from the iron ore producers,” said Myles Allsop, analyst at UBS.

“Rio will see its free cash flow compress by 75 per cent on numbers next year,” he added. “It’s that combination of higher costs and lower commodity prices.”

Energy and labour are of particular concern but so are the costs of chemicals and explosives. On Monday Anglo American’s listed platinum unit AngloPlats reported an 8 per cent increase in costs in the six months to June against the same period a year earlier, while Newmont, the world’s biggest gold producer, raised its annual cost forecast.

AngloPlats said the rise in costs was due to “increases in commodity price linked consumables” such as oil (61 per cent), chemicals (71 per cent) and explosives (55 per cent).

All of this adds up to a challenging set of conditions, even if most of the big miners have significantly reduced debt since the last big downturn in 2014-15.

A broad historical correlation between energy prices and metals has been skewed by the war in Ukraine and western sanctions on Russia’s oil industry, which has made fuel prices more resilient to fears of demand-sapping recession than other commodities.

US miner Freeport-McMoRan has looked at the relationship between copper and diesel fuel prices over the past 16 years. It found that when copper traded at $3.25 per pound (or $7,100 a tonne), diesel cost $2.30 a gallon. However, in the second quarter to this year, diesel averaged more than $4 a gallon.

“Yet people are talking about . . . potentially energy prices spiking again because of what’s going on in the world,” Freeport president Kathleen Quirk told investors last week on a post-earnings call.

Quirk also revealed that Freeport — usually one of the first miners to cut costs in a downturn — had started a process to “look at what we can do” on capital expenditure.

“We’ve been spending capital during 2022 at a slower pace than our original plans,” she said. “And in the current weak environment, we’ll review opportunities to defer spending as we’ve done in the past.” 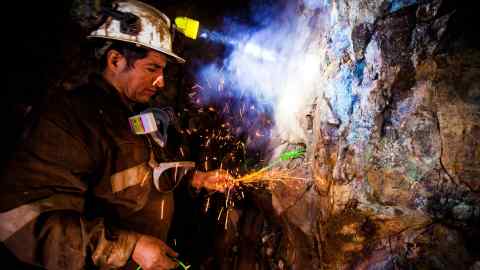 However, that is easier said than done for miners that need to spend a lot to maintain existing capacity as opposed to bringing on new supply, or those that have to decarbonise their operations.

Johnstone nevertheless reckons the longer-term outlook for the mining sector remains bright because of the energy transition.

In a recent study S&P estimated demand for copper would double to 50mn tonnes by 2035 because of its uses in electric vehicles, charging infrastructure, solar panels, wind turbines and batteries.

“We are not getting anywhere along the path to decarbonisation without copper, aluminium and lithium on a long-term view,” said Johnstone.

More immediately, many analysts expect China’s growth to pick up in the second half of the year as stimulus policies take effect, boosting demand for commodities. However, that scenario could be disrupted by China’s slumping property market.

Jefferies analyst Christopher LaFemina said that once the mining sector gets past the current “bad point” of the cycle, “it should be followed by falling costs first and then rising prices next. Current share prices are compelling, although we may not have hit bottom yet.”