Less than half the UK population can expect to be vaccinated against coronavirus, the head of the government’s vaccine task force has said in an attempt to clear up the public’s “misguided” perception of the programme’s aim.

Kate Bingham told the Financial Times that vaccinating everyone in the country was “not going to happen”, adding: “We just need to vaccinate everyone at risk.”

Her comments come as Boris Johnson on Sunday warned that the country was in for a “bumpy” winter. Calling himself a “freedom-loving Tory”, he urged Britons to live “fearlessly but with common sense”.

However, pointing to the latest infection rate data, which has surged despite more than a quarter of the UK living under tighter restrictions, the prime minister said the number one priority was to keep fighting the virus.

The government said “an issue” had been identified overnight on Friday October 2 “in the automated process that transfers positive cases data to PHE”.

As a result, the number of coronavirus cases published between October 3 and October 4 included 15,841 additional cases from between September 25 and October 2.

Ms Bingham said the government was aiming to vaccinate about 30m people, compared with a UK population of about 67m, if a successful vaccine against Covid-19 was found.

“People keep talking about ‘time to vaccinate the whole population’, but that is misguided,” she said. “There’s going to be no vaccination of people under 18. It’s an adult-only vaccine, for people over 50, focusing on health workers and care home workers and the vulnerable.”

Some public health experts said the fact that many British people believed a vaccine would be taken by the entire population pointed to a lack of clarity in government messaging about what the public could expect.

“It hasn’t really been clearly communicated to the public,” said Devi Sridhar, professor of global public health at Edinburgh university. “It would be good if they . . . had a conversation about how that priority process will go.”

She added: “You could make the argument that the people you need to vaccinate are people from a deprived background. The best way to shield is to be wealthy.”

Ms Bingham said vaccination policy would be aimed at those “most at risk” and noted that vaccinating healthy people, who are much less likely to have severe outcomes from Covid-19, “could cause them some freak harm”, potentially tipping the scales in terms of the risk-benefit analysis.

David Nabarro, special envoy to the World Health Organization on Covid-19, also told the FT that addressing the coronavirus crisis was “not going to be a case of everyone getting vaccinated”.

He added: “There will be a definite analysis of who is the priority for the vaccine, based on where they live, their occupation and their age bracket.

“We’re not fundamentally using the vaccine to create population immunity, we’re just changing the likelihood people will get harmed or hurt. It will be strategic.”

The latest advice from the Joint Committee on Vaccination and Immunisation in the UK, published last week, states that “simple age-based [vaccination] programmes are usually easier to deliver and therefore achieve higher vaccine uptake”, and also states that health and social care workers would be a high priority.

It places older adults in care homes and care home workers at the top of its priority list and then all adults aged 50 to 80 next on the list, with older age groups first.

The JCVI said there had not been a decision on who would be eligible for the vaccine.

The health department said it was looking at advice from the JCVI, adding that it wanted “as many people as possible to access a Covid-19 vaccine”.

Ms Bingham, who is also managing partner at fund manager SV Health Investors, said that if any vaccine proved to be 95 per cent effective, which is thought to be unlikely, then it may make sense to vaccinate more widely but any decision on this would be taken later.

The UK government has six vaccine candidates in its portfolio, produced by AstraZeneca and Oxford university; BioNTech and Pfizer; Valneva; Novavax; Johnson & Johnson; and GlaxoSmithKline.

All are likely to require two doses, which is why the vaccine deals with manufacturers have been done in multiples of 60m, Ms Bingham said.

Scientists’ forecasts for when the first of these could present positive phase 3, or final, trial results range from this month, at the most optimistic, to mid-2021 at the most pessimistic. If such trials are successful, companies will look to secure emergency regulatory approval within months.

It is widely believed that any vaccine against Covid-19 will only limit the damage caused by the disease, rather than preventing transmission altogether.

The influenza vaccine was given to roughly 15m people in the UK last year, although the target for this year is double that. It has been more effective in some years than others, preventing anywhere between 15 per cent and 52 per cent of cases between 2015 and 2020, according to research by Oxford university.

Video: Bill Gates on the global battle with coronavirus

Get alerts on Coronavirus treatment when a new story is published

Explore the series
READ MORECoronavirus: free to read
How close is a coronavirus vaccine? 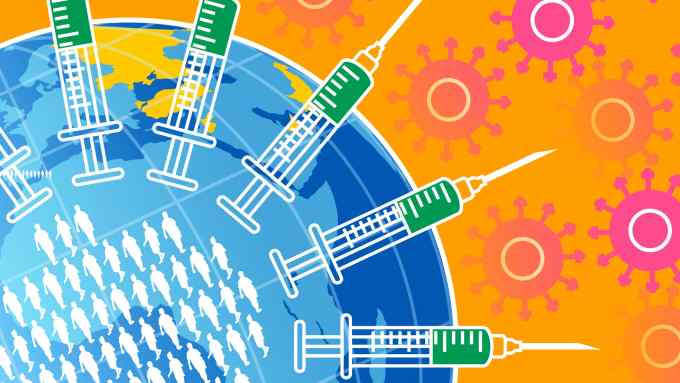