Telemedicine in photos: Covid and virtues of the virtual view

The pandemic has proved the potential of telemedicine, particularly in mental health

Before the Covid-19 pandemic took hold, accuRx’s text messaging software was used in roughly half the UK’s general practices. In March 2020, when the NHS switched from in-person appointments to phone or video consultations, that level of usage rose to 98 per cent almost overnight.

“Our message volume went through the roof; our SMS bill went through the roof; our support tickets went from 300 to 3,000 a week,” says Jacob Haddad, accuRx co-founder. The groundwork his team had done at NHS practices over the years had impressed on him that healthcare is as much a communications industry as a knowledge one. But it took a pandemic for many healthcare providers to reach a similar epiphany, he says.

“Very little of what we built or released was specific to Covid . . . like being able to reply to a GP, to send a photo without a reply, to send a document to a patient. Something we’d built that was hard to get adopted into the system, suddenly there was this urgent need,” he says.

Responding to doctors’ requests, accuRx implemented video consultations between patients and general practitioners into its SMS software. Before the pandemic, an average of 50 practices downloaded accuRx’s software each week — a figure that rose to roughly 1,200 when Covid-19 hit.

Today, more than 500,000 text messages a day, including vaccination bookings, are sent from NHS practices to patients using accuRx software. Across England, online consultation requests rose from 250,000 a week to more than 550,000 between March 2020 and January 2021.

For David Triska, an advocate of telemedicine, the effect has been to cut waiting times to speak with a GP at the Witley and Milford Medical Partnership in Surrey, where he is a doctor. “There was always a battle to gain access to your GP. The playing field between doctors and patients feels like it’s been levelled,” he says.

Similarly, for west London-based GP and accuRx user Sam Shergill, telemedicine has not only allowed doctors to prioritise cases more effectively but has also prompted patients to be more open about conditions that may otherwise have remained unmentioned. “I will always bring in patients if there’s some uncertainty,” he says.

“If we’re doing a review of someone’s mental health, yes, you can get a lot by seeing someone face to face, but a lot of patients may engage with you more by having a phone call to review their depression. Patients might feel safer speaking over the phone about these issues.”

In the UK, however, the expansion of telemedicine services comes in the face of government pressure to improve patient access to in-person healthcare. In October, NHS England announced a £250m winter access fund — due to run until this March — that GP surgeries could tap into to employ more staff, provided that they pledged to offer in-person consultations to every patient who requested one.

For Alex Kumar, medical director at healthcare marketing agency The Considered and a doctor at Guy’s and St Thomas’ NHS Foundation Trust in London, the demand to fulfil in-person consultation targets that were set prior to the pandemic is counterproductive. “There is a bridge to be built between patient expectation and the ability to deliver care, and right now that bridge is crucial because it’s a crevasse,” he says.

According to data from NHS Digital, GP appointments in England totalled 30.3m in November 2021, with 19m (63 per cent) being in-person. This compares with 24m appointments in February 2020, before the coronavirus pandemic took hold, with 19.2m (80 per cent) of those in-person.

“The idea that there is some problem for patients doing [telemedicine] is wrong because many people do not want to come into a crowded waiting room,” Triska says. “They just need a problem dealt with efficiently.”

Explore the Special Report
READ MOREFuture of AI and Digital Healthcare
Telemedicine in photos: Covid and virtues of the virtual view 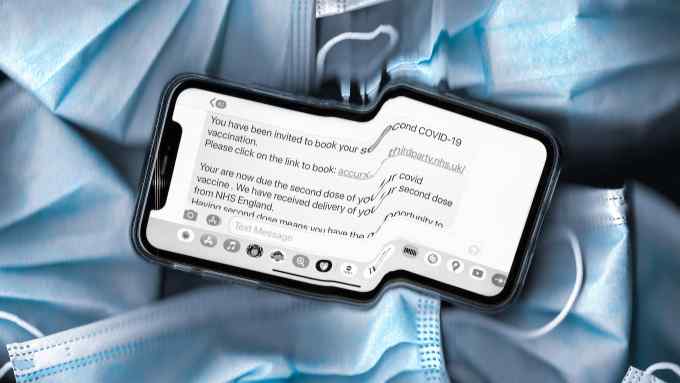