For Nicola Tassie and Rowena Morgan-Cox, it’s all about blurring the boundaries of the fine and decorative arts

In a former button factory just north of London’s Old Street, Nicola Tassie is busy building a wall. “It’s going to be a dry stone wall of glazed pots,” she says from her bright, spacious workroom, located at the top of three flights of higgledy-piggledy stairs inside the artist-run studio complex Standpoint. The space has been home to Tassie’s handmade stoneware pottery practice for the past 30 years and there’s evidence of its evolution in every corner: shelves overflow with jugs and vases; on one wall is a wall-mounted wiggle of a sculpture; and her kiln is filled with two shapely forms waiting to be stacked on top of each other in one of her Totem sculptures, which can reach 2m or more in height. In the centre of the room is a snaking wall of individual, interlocking ceramic elements – some smooth and pebble-like, others more pot-shaped. The piece is her most complex to date at around 2m long and more than 1m high, and destined for a group show at Cross Lane Projects in the Cumbrian town of Kendal.

Also in the exhibition – alongside ceramics by contemporary artist Gavin Turk, ceramic sculptor Lawson Oyekan and studio potter William Plumptre – are a couple of Totems and a ring of stones on the floor. “There’s a vertical-horizontal thing going on,” Tassie says of the work, as she leads the way down two flights of stairs to a second, sparser studio space, where she hosts ceramics classes twice a week. The most recent recruit to her class of nine students is Rowena Morgan-Cox, a former managing director of The Fine Art Society gallery, who last year launched her own design brand, Palefire (named after the Nabokov novel), with a simple but striking range of lighting.

Morgan-Cox first met Tassie at 8 Holland Street, the London art and design store she helped to launch in 2018. “I’m a massive Nicola Tassie fan. So when I found out she did classes, I told her I was keen,” she says, adding that she started as soon as a space became available in 2019. “I became interested in ceramics through selling them at The Fine Art Society, but I had also begun to think that I’d quite like to do something creative myself,” she recalls. “Initially, it was such a humbling experience. I was just so terrible!”

Was Morgan-Cox as bad as she makes out? “No. But then…” Tassie pauses, and smiles. “Most of the people in my class have been coming for years and do their own thing. I’d become an incredibly lazy teacher, and then Rowena turns up – she’s got such a broad idea of what she wants to do and just tried lots of different things. I envy that playfulness: it doesn’t have to go anywhere, it’s for her own pleasure. I live vicariously through my students.”

Tassie holds up one of Morgan-Cox’s creations: a ceramic collage of curving cut-out shapes glazed in mottled indigo blue, burnt orange and lemon yellow, referencing the American artist Frank Stella. The pair are also both inspired by Omega Workshops, the design arm of the Bloomsbury Group founded in 1913 that applied its painterly aesthetic to plates and fabrics, lampstands and chests of drawers.

“I did a lot of painted imagery on my first pottery pieces, which was very much in the Omega Workshops style,” says Tassie, who originally trained as a painter. “I had a painting studio in an ex-funeral parlour with a group of friends in what was then an incredibly derelict Hoxton.” Deciding to take evening classes in ceramics took her in a new direction, and today she crafts wheel-thrown wares, making limited-edition jugs and lamp bases for Margaret Howell’s stores, as well as expanding her increasingly sculptural repertoire. Fans of her oeuvre include film director Sam Mendes and art dealer and collector Manuela Wirth. “I approach my work very much through painting and fine arts, and as Rowena has a very knowledgeable art background, we speak a common language,” Tassie adds.

Morgan-Cox studied history of art before taking up a position at The Fine Art Society in 2012. “If I were at all snobby about the differentiation between art and design, that was completely wiped out by my work there because it has a long history of selling both,” she says of the gallery, which dates back to 1876. “In fact, I increasingly focused on design over time and sold a lot of mad, historical stuff.” When the new Fine Art Society gallery space was launched in a Georgian townhouse in Soho in 2020, she was able to express this in its inaugural exhibition, which featured paintings by Whistler and Walter Sickert alongside a tea set by Christopher Dresser, and a modernist glass armchair by artist Denham MacLaren on a huge, painterly Omega Workshops rug (reproduced by the specialist Christopher Farr). The colours of the rug were echoed in a contemporary inclusion: a trio of Tassie’s Totem sculptures.

“That exhibition was the culmination of my education at the Fine Art Society in blurring the boundaries of the fine and decorative arts,” says Morgan-Cox, who has also brought painterly elements into her Palefire lighting. Her handpainted Parasol table lamp, for instance, is available in two patterns: a zingy citrine check and a squiggly green-hued serpent design. “The decoration is 100 per cent from Omega Workshops,” says Morgan-Cox, “but I was also inspired by Fontana paintings, Gio Ponti furniture, and a Victorian British designer named Charles Bevan who made very decorative, neo-Gothic painted furniture. That is something Nicola and I share – we both make lamps that play with the concept of art objects and functional design. We’re creating sculptures and lighting in one but, of course, the outcome is very different.”

One of the main differences between Tassie and Morgan-Cox is that Palefire’s lights are crafted not from ceramic but recycled paper pulp, manufactured in small batches at a family-run workshop in Barcelona, then handpainted at its Brixton studio. “When I started out, I thought the patterned surfaces would be something appreciated on Instagram but that no one would ever purchase them. But people are buying them,” she says with genuine surprise. “People are more daring than I thought.”

Morgan-Cox based the design of her debut collection on a modular system of five shapes that, she says, “is not totally dissimilar to the way that Nicola’s Totem forms evolved from stacking pieces on top of each other”. Her new range, launching this month, shows further synergy between the two women’s work: as well as conical wall sconces and a domed table lamp – building on the original five forms – there’s a floor lamp consisting of “several stacks on top of each other in a kind of totem-esque form”, says Morgan-Cox. “It certainly speaks to Nicola’s work, but also to that of Brancusi.”

While Palefire’s pieces are sold online (via its own website and new interiors site Glassette), Tassie’s work is showcased by 8 Holland Street and Margaret Howell in London and the Hostler Burrows galleries in the US, which gets the pair thinking. 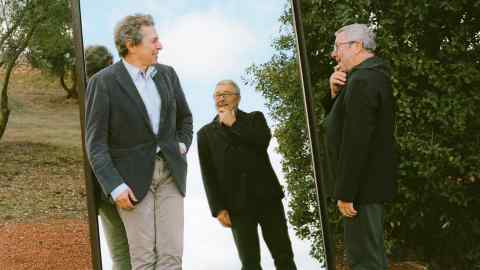 “A fantasy future project of mine is to create some kind of physical environment for my work,” muses Morgan-Cox of a potential collaboration with her friend and mentor. Tassie nods in agreement. “That would be great – a sort of gallery space focused on the domestic, and mixing sculpture and painting with furniture and lighting,” she says, noting that the interest in decorative arts is gaining traction. “So the time is right, Rowena,” Tassie laughs. “Let’s do it.”