We’ll send you a myFT Daily Digest email rounding up the latest EY news every morning.

The head of EY’s US business quit the Big Four accounting firm after a power struggle with its global boss, underlining the tensions between the group’s competing fiefdoms as it considers a radical plan to break itself up.

Kelly Grier, the first woman to lead EY in the US, clashed with global chief executive Carmine Di Sibio over the influence her business should wield within the firm’s international operations, said four people familiar with the matter.

The two also disagreed over how much the US firm, by far the biggest in EY’s international operations, should pay to fund EY Global, the people added.

EY is structured as a network of legally separate national member firms that pay a fee to EY Global, which does not serve clients directly but manages the firm’s brand and technology and oversees the relationship between its businesses in 150 countries.

Grier, who was elected to a four-year term as country chair and managing partner by EY’s US partners starting in 2018, told them in October that she would not seek a second term. She will remain in the post until leaving the firm when her term ends on June 30.

EY is weighing whether to split its audit and advisory divisions, including through a public listing or partial sale of its global advisory arm, in what would be the biggest shake-up of a Big Four accounting firm since the fall of US energy company Enron in 2001.

The bust-up between Grier and Di Sibio predated planning for a possible break-up, said a person familiar with the matter.

However, the tensions between two of the most powerful executives at the 312,000-person firm highlight the difficulty Di Sibio and his colleagues face in forging a consensus in favour of such a plan among its 13,000 partners globally.

Grier was “always particularly partisan towards the US firm”, said one person with knowledge of the relationship. “She wanted to have much more say for the US firm in the global set-up.”

EY’s US business accounted for more than 40 per cent of the firm’s $40bn sales globally last year.

Another of the people said Grier had questioned why EY Global needed so much power and resource. “Relations with Carmine deteriorated rapidly,” the person added.

EY’s top global job has always been held by an American and Grier was seen as a contender to replace Di Sibio in the role when his first four-year term ends in June 2023. Di Sibio is viewed as a “caretaker” by some colleagues following the departure of Mark Weinberger in 2019 after six years.

Grier — also EY’s chair and managing partner of the Americas region, the largest of its three geographical segments — overplayed her hand in trying to position herself as Di Sibio’s successor, said some of the people with knowledge of the tensions between the pair.

“She flew too close to the sun and got her wings burnt,” said one.

Di Sibio remains “well-connected to the US partnership”, meaning Grier may have struggled to win re-election had she put herself forward, said another person briefed on the matter.

EY
Inside EY’s break-up plan: why it could radically reshape the Big Four 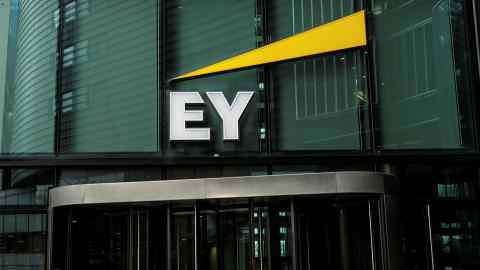 In a statement to the Financial Times, EY said Grier’s decision to leave “was her choice”. EY announced in February that Julie Boland, managing partner of its central US region, had won an election by US partners to replace Grier.

Some people at the firm said EY had tried to limit the fallout from Grier’s decision not to seek re-election, with one claiming the firm had “tried to smooth over the fact she’d been knifed” through its management of the transition of power to Boland.

Lawyers for Grier had been in correspondence with EY over her exit, said people familiar with the matter. It was customary for lawyers to be involved in the departures of senior executives and the legal correspondence has now concluded, said a person briefed on the matter.

EY said Grier had “a record of success” and credited her with delivering “significant revenue growth and record earnings while also achieving our highest audit quality results”.

EY said last week that “no decisions have been made” about whether to proceed with a restructuring.