Do the pebble dash

Sculptural, tactile or merged into a disco ball, smooth stones are inspiring artists and interiors again

Laura Fischer wasn’t looking for stones; they found her. Or rather, they landed at her feet, washed right up on the shore in their hundreds during a winter storm.

“I was living for a while in a small, beautiful beach town north of San Diego,” explains the artist, a resident of coastal Bellingham, Washington, who specialises in off-loom weaving. “For my previous series, I worked with engineered forms – hefty, large-scale, poured-concrete pieces; so I had been looking to explore an organic ‘found’ object. Suddenly one morning the beach was full of these incredible shapes and colours, tumbled over centuries, and I knew what to do.”

Fischer washes off the salt and hand-weaves a custom, open “net” around each of her found pebbles, using the kind of waxed linen threads that are used for fishing nets. The results are mind-boggling: each web of tiny knots is a mathematical feat as well as being mesmerisingly beautiful. “Every stone presents a different challenge,” she says. “It’s exciting not to be the designer of the form but just to interact with it.”

With these decorative objets, designed to hang on the wall in singles or pairs or held as “palmstones”, Fischer has harnessed something that resonates right now. While taking inspiration from found stones is by no means new, there does appear to be a bit of a pebble dash going on, as creatives across many disciplines channel the tactile beauty and escapist spirit of small stones.

Zaha Hadid Architects’ landmark Shenzhen Science & Technology Museum for the city’s Guangming Science City, set for completion next year, is shaped like a pebble. Kanye West’s portable music mixer, Stem Player, sits in the palm like a small stone with smooth, comforting curves. Meanwhile, artist Daniel Arsham has imagined furniture out of rock formations – the Pebbles armchair, the Bedrock table – in a collection inspired by stones from the beach behind his Long Island house, and Play-Doh models he made with his children.

“Originally they were meant as singles, but two of them came out in different sizes so naturally I went to stack them on top of each other, just as you would on the beach,” says Thorpe. “I think it’s a deep-rooted, playful instinct but meditative too. I gave a stack to the jewellery designer Carolina Bucci as a present, and the whole time we were together she was holding them, stacking and unstacking them – she didn’t set them down.”

Thorpe has been stunned by the response to the pieces, which launched on Net-a-Porter and are now in The Conran Shop and Liberty. “They have a kind of emotional energy – people are reporting it back to me. A sort of talismanic power.”

It’s maybe similar to the way people are drawn to crystals, she argues – an attraction that goes beyond aesthetics. “We want – need, even – to forge an emotional connection with objects. The pebble thing is somehow primal; it’s like a movement away from excess and back to nature.”

“There is something so pure and comforting about the worn exterior of a pebble, slowly smoothed by waves,” agrees LA-based interior design supremo Kelly Wearstler. “Designs inspired by structures like this, found within the natural world, can definitely encourage a deeper connection with our surrounding environment. Whether it is through material choices, statement objets or entire design schemes, this aesthetic is calming, and conducive to productivity and wellbeing.”

HTSI
The bulbous beauty of bobbins 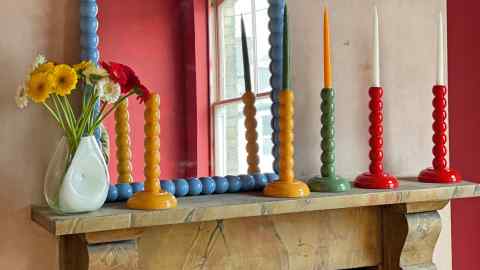 Wearstler’s latest take is the limited-edition Quelle Fête Malibu sculpture created with Dutch art collective Rotganzen, which has a “melted disco ball structure” that appears as a stone but with a swirling form, reminiscent of an incoming wave. Its mirrored tiles capture the light in the same way the sea reflects the sun, and “the moment a wave reaches its peak before crashing down, glistening like a spinning disco ball”, she explains. “We wanted to bridge the feelings of freedom and longing conjured by both the coast and the carefree era of disco… of losing yourself on the dancefloor.”

Brazilian jeweller H Stern’s Golden Stones collection wouldn’t be out of place on said dancefloor. Its “irreverently rounded rocks” mimic river pebbles to joyful effect. The French design studio Smarin also opts for a splash of surrealism with its Livingstones cushion concept: a collection of “oversized pebbles” in soft, virgin wool. In a range of tones, sizes and shapes, it’s designed to “perpetuate the holidays and encourage playfulness” as you recreate a soothing landscape of rock pools and stepping stones at home.

As Thorpe says, pebbles are “a shape with no boundaries, and the building blocks of the planet”. They may seem cold, rigid and inanimate in their found form, but somehow they can become terribly moving – the very stuff of life.