The duo putting the dramatic into aromatics

Eight years ago, French theatre director Cyril Teste and perfumer Francis Kurkdjian arranged a rendezvous at a café in Paris. “I was a bit reluctant to go to that meeting,” admits Kurkdjian, the super-nose behind a string of bestselling scents for Jean Paul Gaultier, Burberry and Dior (where he was named perfume creation director in October 2021) as well as his eponymous fragrance line. “Cyril was looking to bring scent into a theatre piece he was working on,” recalls Kurkdjian. “I said that I only had 30 minutes – I stayed for almost two hours.”

“What I remember most is that we talked about the forest,” adds Teste, whose reinterpretations of Shakespeare’s Hamlet and Chekhov’s The Seagull have been described as “performance filmique” – a splicing of theatre and cinema. “I told Francis that it was really important for me to find a smell of the forest because it reminds me of my childhood. And I was very surprised by his questions because they were very precise: ‘Where is this forest? Is it in the south, or in the north? Is it morning or afternoon? Is it rainy or not?’”

From this initial conversation, Teste foresaw a “beautiful future of collaborating together”. He says of their instant rapport and shared ethos: “We have a similar approach to work; for both of us it’s important to have a story and a reality.” Their first partnership was Festen, a stage version of the 1998 film by Danish director Thomas Vinterberg, produced by Teste’s boundary-pushing theatre collective MXM (Monkey Ex Machina). “The stage is set in the middle of a forest, and little by little you go deeper and deeper into the story,” explains Teste, who tasked Kurkdjian with creating different notes for several scenes – from a fireside interior to what Teste refers to as “the great story of the croissant”.

Kurkdjian smiles: “I remember the smell of the breakfast scene.” But rather than recreate the aromas of coffee and croissants, Kurkdjian drew upon an element of the plot: the scent of the main character’s departed sister. “And the final result was emotionally very powerful in the play,” concludes Teste.

As part of a performance, a scent can make you cry or feel anger – the array of feelings is much wider

This kind of scent experimentation, especially its power to evoke memory, is something Kurkdjian has long been interested in. “When you work outside the bottle, when it’s not about creating a commercial perfume, then you can create a piece of olfactive art,” says the 53-year-old Paris-born perfumer, whose first artistic collaboration, with Sophie Calle in 2003, was L’odeur de l’argent: a scent based on “the memory of a well-worn dollar bill”, which was presented at the Cartier Foundation for Contemporary Art in Paris. Since 2006, he has also produced a number of “olfactory installations”: from scented fountains at Versailles to wafts of fragrant bubbles at the Grand Palais. “When you create a perfume to wear, it has to please in a very specific way; it has to smell good,” says Kurkdjian. “But as part of a performance, a scent can make you cry or make you feel anger – the array of feelings it can elicit is much wider.”

But whether creating an installation or a perfume, Kurkdjian’s process remains the same. “I’m always telling a story through scent,” he says. “I am either told or I tell myself a story, which is then translated into something that you can smell. But the process never starts with a smell. The very first thing I start with is the desire to create something new.”

The starting point for his latest Maison Francis Kurkdjian release was an early-morning walk in New York. Putting his experience of the city’s palpable, non-stop energy into words is best done, he says, by way of a Simone de Beauvoir quote: “There is something in the New York air that makes sleep useless.” The resulting perfume, called 724, is a “musky, floral, urban fragrance”, “a totally abstract olfactory theme composed of shades of white whose textures overlap in an energetic, flowing rhythm”. Intense yet airy, the eau de parfum’s inspiration from New York laundries is immediately apparent in the fresh, bergamot-laced top notes, while the central floral scents – jasmine absolute and white flowers – are deepened with sandalwood and white musk at the base.

“My whole vocabulary is based on smell: it’s intangible, it’s invisible,” says Kurkdjian, whose vision for 724 also began with the packaging, in a specially conceived colour he calls “urban blue” – a mélange of blue denim jeans and cement grey. But here, too, the partnership with Teste came into play. “Having worked with Cyril on three or four projects, I thought that he could handle the mission of being my eyes. Cyril bridges the gap that I have between what the perfume smells like and what it should look like. He can translate the feelings into images.”

Teste was artistic adviser on a 40-second film for 724, in which the perfume bottle becomes part of an urban skyline – a shimmering skyscraper that witnesses the city shift swiftly from sunrise to nightfall. The swoosh of subway carriages and taxis is set to pulsating piano music capturing the driving energy Kurkdjian wanted to distil.

Teste has collaborated in this way before. His talent for visualisation was also called upon by Hermès menswear artistic director Véronique Nichanian: their presentations spanned an online-only, behind-the-scenes-style performance for SS21; a multi-screen set for SS22; and a slick stomp around the historic Gobelins tapestry factory in Paris for SS23 – a show that began with a canvas sheet billowing out of the building, only to disappear.

“There is an incredible lightness to Cyril’s work,” suggests Kurkdjian, “even when he’s looking at a dark story like Festen.” For Teste’s 2019 adaptation of John Cassavetes’ Opening Night, Kurkdjian once again provided a scent element – this time in the form of a perfume for the lead character, middle-aged stage actress Myrtle Gordon, played by Isabelle Adjani. “And she still wears that perfume,” adds Kurkdjian. “I even did a body cream for her.”

HTSI
Cult Shop: the perfumer who plays with the elements 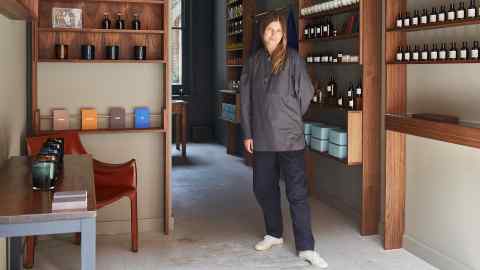 Many of Kurkdjian and Teste’s collaborations arise from ongoing conversations. “There’s a constant back-and-forth between us,” says Teste. “What brought us together was our passion for the arts, in the broadest sense, and we share suggestions to go and see this exhibition or that show.” Recently they went to a piano recital together, by Katia and Marielle Labèque. “I wanted to hook Cyril up with the sisters, who are friends of mine,” says Kurkdjian. “I love to marry people together, and then see what comes of the creative match.”

More immediately, Kurkdjian and Teste hope to realise another project they began thinking about four years ago, which will take them into yet another artistic realm. “It will be an exhibition,” says Kurkdjian. Teste agrees: “A multi-sensorial installation with an artistic, 360-degree approach,” he adds. “I’d love to make it happen.”