“I’m not sure I would go so far as to say that one-name designers are over, but two heads are always better than one,” says Alexandra Pappas, one half (the bad cop half) of Pappas Miron, the New York design studio that she founded in 2003 with her best friend Tatyana Miron. Nearly two decades into their adventure as business partners (friendship intact, thank you very much), the two don’t just complement one another in front of the drawing board and at their on-site installations. After more than 50 residential projects, they know how to fuse their individual strengths and play off their internal tensions.

The pair is just one example of a surge of American design duos whose closeness transcends office hours. Friendship can muddy the waters in business, but in the right creative circumstances an earned intimacy and shared history go a long, beautiful way. Working side by side with their most trusted partners, the new guard of creatives are tapping into the powers of mutual affection, snag-free communication and a healthy dose of radical honesty to take a project to the next level. As the American writer and philosopher Ralph Waldo Emerson put it, “Better to be a nettle in the side of your friend, than his echo.”

While we have a deep-ingrained spirit of individualism to thank for iconoclastic designers such as Dorothy Draper and Bunny Williams, there is a lesser-known tradition of two partners, tiny teams that run on the magical alchemy of a pairing gone right. Society decorator Sister Parish spent more than 30 years of her career collaborating on interiors with her dear friend Albert Hadley (their firm was called Parish-Hadley). The names of ’80s design darlings Mario Buatta and Mark Hampton might both be synonymous with solitary genius, but when the White House was looking to spruce up the president’s guest house during the Reagan administration, the pair linked up to drape the home in sumptuous fabrics, handpainted wallpaper and wowie-zowie window treatments. More is more, in more ways than one.

Think about it. If you were entrusting your home to somebody who wasn’t going to have to live in it, would you want to hire a creative who might be used to hearing “yes” from all quarters or a duo who could function as each other’s sounding boards? “Anyone can bring you exciting ideas,” says Louisa Pierce, one half of Hollywood’s Pierce & Ward, “but nobody can push you like your partner can.”

Todd Nickey and Amy Kehoe: Nickey Kehoe, Los Angeles
“We’re hunters and gatherers,” says Todd Nickey of the primal bond he shares with Amy Kehoe, his friend and business partner who he first met at a Rosh Hashanah dinner in New York City. “We hit it off and spent the night talking about design,” recalls Nickey, who had been working in creative services at Ralph Lauren. “When you meet your unicorn, you don’t question it,” says Kehoe, who was working on design at Starwood Hotels and Resorts.

Soon the pair were meeting up at weekends to trawl the Chelsea Flea market. Business talk didn’t enter the picture for a few years while they were both working in LA. But in 2004 Nickey had another idea. “I decided Amy and I should do something together,” he recalls. Nickey Kehoe was founded on bringing their rustic yet clean sensibility to residential and hospitality projects. But in the two decades since, the brand has expanded to include a showroom in Los Angeles near Hancock Park, packed with finds they pick up on their travels, as well as custom pieces designed and built by partners in LA.

“It’s our little laboratory,” says Nickey. “So we can test things and bring the items we love to the projects that we’re working on.” It cuts both ways: custom furniture and lighting that they design for projects often find their way to the showroom. Shoppers will also find a line of candles named after Nickey’s grandfather Bernard, and the fruits of a candle collaboration with Parisian glassblowing studio La Soufflerie. And now next door to the furniture shop is Household, a home furnishing and decorative accessories store. Many of their clientele work in entertainment, including the chef Suzanne Goin and actors Casey Wilson and Mark Ruffalo. “We work with directors, managers, producers and actors,” says Kehoe. “You get to see inside the industry in a new way.” As their empire has expanded, they’ve had to become realistic about divvying up the jobs. While they both have their hands in every aspect of the business, their division of labour is such that of the pair Nickey spends more time overseeing the retail while Kehoe mostly keeps busy doing the interior design work. It’s on resourcing trips – recent ones took them to France, Italy and India – that the friends get to regroup. “We’re talking about our business, sure,” says Kehoe, “but it’s also an excuse to catch up.

Louisa Pierce and Emily Ward: Pierce & Ward, Los Angeles and Birmingham, Alabama
If you follow the world of celebrity interiors, you’re probably familiar with the work of Pierce & Ward, the duo behind the homes of Dakota Johnson, Brie Larson and Leonardo DiCaprio. But while Emily Ward and Louisa Pierce have become fixtures of the Hollywood design scene, “neither of us grew up in that world”, says Ward. She grew up in Laguna Beach, California, with her father, a roofer, and her mother, who was a fan of DIY. Pierce is a native of Alabama (and the daughter of a mother who loved to knock down walls or paint the house as a little surprise for the family). The pair met as twentysomethings in New York City. Pierce’s then-boyfriend (now husband), Austin Scaggs, was writing a Rolling Stone profile of Ward’s then-boyfriend (now ex-husband) Patrick Carney, a member of The Black Keys. On double dates, the women bonded over their shared “dream home” design scrapbooks. Both couples relocated to Nashville and Pierce ended up designing Ward and Carney’s home. It featured a black-and-white striped hallway that appeared in magazines, led to a surge of requests – and inspired the pair to join forces. Their first client was model and musician Karen Elson, who is also a good friend.

The aesthetic is Bloomsbury Group for the Batsheva set

Their punchy, textured aesthetic – Bloomsbury Group for the Batsheva set – is the result of their particular leanings. “Louisa has always been more confident and daring,” says Ward, who blames her clean, airy aesthetic on growing up in the ’90s surrounded by the all-white California look. “We are constantly pushing each other and evolving,” adds Pierce, whose tastes tend to skew a bit more “old world meets whimsical glamour”.

The two now live on different coasts – Ward in Los Angeles with her partner, the actor Giovanni Ribisi, and their children; Pierce has returned to her native Birmingham. Zooming all day long they divide and conquer from their respective corners of the nation. Pierce’s strong suit is architectural duties while Ward spends more time at the design shop they recently opened in Los Angeles and takes a first crack at the moodboards that are the starting point for their work. Every decision is shared, from the choice of doorknobs to their new wallpaper collaboration with British label House of Hackney.

The pair strive “not to be boring”. They veer away from looks they see on Instagram. “Our client base is creatives, so they understand what it means to give us creative freedom,” says Ward. Once the client has signed off on the investment pieces, the designers like to fill in the gaps and present everything at the end. “It’s like omakase,” says Pierce of the surprise revelations. “You can tell us if you’re allergic to something, but then you leave the rest to us.”

Alexandra Pappas and Tatyana Miron: Pappas Miron Design, New York
Alexandra Pappas and Tatyana Miron can’t remember a time when they weren’t friends. The principals of Pappas Miron Design have been living à deux since they were in utero, as their mothers were friends. A second-generation friendship between their daughters was all but inevitable, and nobody was all that surprised by the business partnership they formed a couple of decades later. Miron’s mother designs decorative pillows that she makes out of antique textiles, and Pappas comes from a family in real estate development, which meant a great many Sundays were spent tagging along “looking at weird old houses”, recalls Miron.

After earning art history degrees the pair settled in New York, where Miron went on to get an interior design degree and found work at the office of the uptown interior designer Tori Golub, while Pappas worked for Verdura jewellery. Their taste was already popular among their friends, all of whom anointed them their unofficial interior designers to fill their apartments with treasures they found at Salvation Army and vintage shops.

That heirloom-meets-outrageous-’80s aesthetic still informs the projects they have been working on in a more official capacity since 2003, when they filed as a limited company. Today, they work out of a Union Square office with the support of two employees (soon there will be three), where they have established themselves as the go-to designers for open-minded individuals, often families, eager to live in a home that feels one-of-a-kind. “We’re pretty lo-fi around here,” says Pappas. “You see some other designers on Instagram, and they’re like: ‘Here’s our board for the library in the Palm Beach mansion,’ and it’s all very organised, with cut-out images and little fabric pieces pinned beautifully to poster board.” 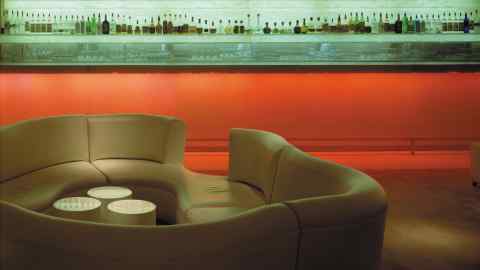 Their approach is a bit looser and the kinds of flourishes they favour, such as curved sofas and pulpy tangerine walls, can take a little warming up. “There’s always a little bit of hand-holding when a client sees something we’re suggesting and says, ‘Wait, my grandmother had something like that,’” says Miron, whose tastes are more dramatic than those of her partner. “Our job is to take these old world things and present them in a way that’s fresh,” she says. 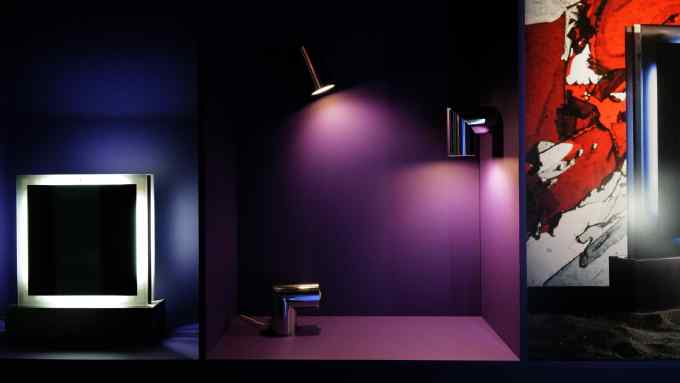