It’s a Sunday morning, and Veeraj Haria-Shah and Alexandra Richards, co-founders of ready-to-wear label Coconut Residence, are sitting side by side on a sofa. “We had dinner last night with both of our families,” Hariah-Shah says. “We try to get together as much as possible, but my parents are in north London and Alexandra’s are in south.” Richards smiles: “Yes – we’re together, together,” she clarifies, with a laugh; the duo are a couple as well as business partners. It’s a personal link that goes to the roots of the company.

Coconut Residence, launched in 2020, is an exploration of the couple’s shared heritage – Richards’ Guyanese and St-Vincentian background with Haria-Shah’s Kenyan-Indian roots. The mens, womens and unisex collections embrace colourful linen suits, jumpers, hoodies and accessories including market bags and beanies. The richness of the overlapping experiences is particularly in evidence in the collection of bright linen shirts (£120) and shorts with buckle details (£95), which are inspired by the meeting of Indian prime minister Jawaharlal Nehru and industrial designers Charles and Ray Eames in 1958. It also powers the collaboration with Canadian photographer and reggae superfan Beth Lesser, which saw T-shirts printed with portraits of icons from Jamaican dancehall culture (£50).

Both of these concepts speak to moments that are rich in cultural significance and global connections. “We couldn’t really identify with any brand started specifically by people from our backgrounds,” Haria-Shah says. “But these were stories very much based on our history and immigration.” Richards talks about the experiences of her grandfather, a black barrister, who arrived in London as part of the Windrush generation. Haria-Shah discusses his maternal grandparents and the successful food export business they built.

The idea for the brand came courtesy of an Indian meal, where they were struck by the similarities in their Caribbean and Indian cultural heritages. “I said Alexandra should try the chana masala, and her response was ‘Chana? My Grandma makes that,’” remembers Haria-Shah. “We started to unpick how it all came to happen.” Together, they trawled through family photos of their grandparents in sharp suits and tailored dresses and found the energy of “recently arriving in London” to be fertile roots for the label they’d go on to create.

Both had backgrounds in fashion. Richards’ early interest in styling had led her to pursue an internship with independent label Catherine Fulmer in the US. Hariah-Shah’s degree in fashion management was followed by a buying role at Marks and Spencer, and mentorship from Savile Row designer Mark Powell. “I had started selling jeans out of my school locker at 15. Where there should have been books there was selvedge Japanese denim,” he recalls. The two eventually met in 2013, when they were both buyers at Paul Smith.

Recently, the duo has collaborated with London-based illustrator Gaurab Thakali on a limited run of sweatshirts and T-shirts featuring Thakali’s image of activist and athlete Colin Kaepernick, in support of action against police brutality (T-shirts £50, hoodies £65). They also continue to develop a model that prioritises sourcing from small family-owned companies, sharing profits with collaborators, and donating meals to The Felix Project, a UK charity that counters food poverty and food waste.

As the conversation returns to family, Richards says: “Our parents and grandparents were trailblazers, weren’t they?” and looks over at Hariah-Shah. “And they were resilient as well”, he adds. In years to come, hopefully their own grandchildren may be sitting on a sofa saying something very similar about them. 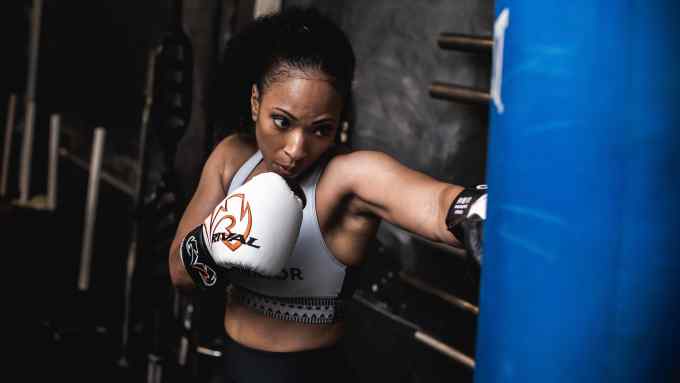