Do you lacquer what you see?

To celebrate 10 years of Repossi’s Berbere collection – the minimalist rings that creative director Gaia Repossi calls an “everlasting signature” – the Italian jewellery house is launching a new range of bands called Berbere Chromatic Cities. Each uses different coloured lacquer to represent each place: the London ring is painted with bright double-decker-bus-red lacquer, while the Tokyo style features a cool matcha-green alongside a band of pavé diamonds.

One of the world’s foremost enamel jewellers is British designer Alice Cicolini, known for her modern take on the craft of minakari, which dates back to 1500BC. This month sees the launch of her Jacobean collection, inspired by the geometric ceiling patterns of the Red Fort in Lahore and Hampton Court Palace, which uses rose petal-pink enamel alongside pavé diamonds.

Cicolini has a long established partnership with the studio of Kamal Kumar Meenakar, the Indian master craftsman, and also works with a British master jeweller in Hatton Garden. Her 2012 Memphis collection, with its joyful graphic stripes, was something of a landmark in modern enamel jewellery. Her latest collection is much more intricate: “I like pushing the boundaries of the technology we use,” she says. “The Indian body of work we make is completely handmade, but the Memphis pieces are created in 3D CAD. The 3D printing tech – where you print waxes that are then cast into gold – has significantly changed. What you see in these pieces, small decorative flowers and small patterns, would have been impossible even a year and a half ago.”

So much fun can be had with enamel. Jaipur-based Amrapali’s Holi collection uses traditional techniques to create striking flower petals for rings and earrings, while in New York, Nina Runsdorf’s signature sliced stones are surrounded with slicks of fire-engine red or mustard. Runsdorf calls it “adding a fresh coat of paint” to the jewels. In Paris, Charlotte Chesnais’s stackable rings and wavy hoops bring pared-back sophistication to the genre, while in Milan Bea Bongiasca’s mismatched flower earrings are like beautiful felt-tip doodles come to life. Gabriela Hearst uses glass enamel for its sleek bangles, as does British brand Ferian, with a collection of rings in colours chosen for their emotional significance – coral red for courage, faith and love, and pool blue for tranquillity and truth.

For many of the larger houses, the use of enamel or lacquer – which are low-cost materials in the grand scheme of jewellery making – is often contrasted with higher-value stones. Victoire de Castellane, the creative director of Dior’s fine jewellery department, is a master of this mix: see the brand’s playful Milly Carnivora ring, launched in 2008, which uses green, pink and blue lacquer to create the petals of a flower, in which a two-carat diamond is the centrepoint; similarly in the large Diorette ring an aquamarine is encircled by a hand-lacquered garland of blooms, butterflies and ladybirds. This idea is taken to the extreme at Boodles, where delicate strips of enamel accent some of the rings in the brand’s latest high-jewellery collection, and at Bulgari, where enamel has long been used as detailing in the house’s Serpenti pieces.

Browns Fashion has gone big on enamel jewellery recently, stocking the bright and textured pieces of Yvonne Léon, Alison Lou’s tiny enamel rainbow studs and Marla Aaron’s signature customisable locks, which have been updated with neon stripes this season. For the store’s womenswear buying manager, Hollie Harding, it’s the juxtaposition of enamel or lacquer with precious metal that hits the spot. “The contrast between the opposing materials is so interesting and unconventional. It adds so much personality and statement to jewellery, along with evoking a sense of happiness,” she says. “Customers are loving the bright colours. They provide a small flash of positivity.” 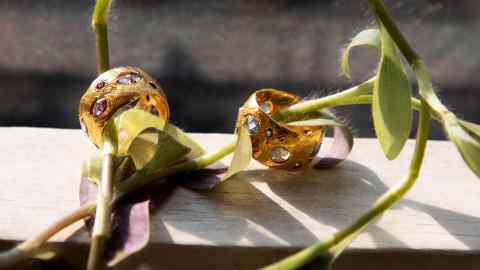