The urban gardener sowing the seeds of social change

Claire Ratinon is cultivating a new agenda in horticulture

“No one believes it’s a cucumber!” Claire Ratinon exclaims, her face filled with wonder. The vegetable she is holding up is round with a yellow, watery skin. It does not look like a cucumber. It was grown by Ratinon in her greenhouse, and the joy she takes from it is infectious. It’s a feeling she is keen to cultivate in fellow city-dwellers with her book, How to Grow Your Dinner without Leaving the House. “I hope and pray that it helps people to grow,” she says, suddenly serious. “The act of sowing seed is elemental.”

It’s surprising, however, to discover that Ratinon’s love of nature is relatively new. “I grew up in an immigrant family in Surrey and I was really bookish,” she says by way of explanation. “There was a sense that nature wasn’t for us.” Originally an independent-documentary filmmaker, she stumbled across a rooftop farm in Brooklyn while working in New York. The films she had been making related to social justice, but her exposure to gardening heightened a growing disillusionment with the industry. “I told myself the work I was doing was making change,” she recalls, “but after a while, I thought, ‘Who are you kidding?’ You are one step removed from the change.’”

Following two seasons volunteering at the farm, Ratinon decided to return to London to see if she could make growing food a part of her life. It was a successful leap: teaching urbanites how to produce vegetables in limited spaces became the subject of her first book, and she is developing a second. 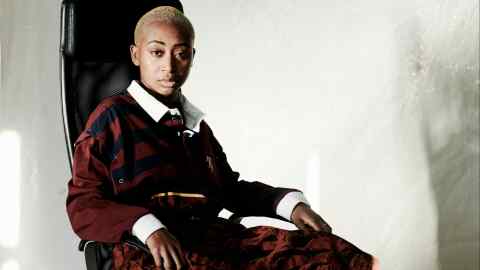 But for Ratinon, the act of gardening is not only practical and sustainable, it is also spiritual and political: she has a Buddhist meditation practice that draws on natural systems and our interdependence with nature, and she will soon begin a residency at West Dean College, in West Sussex, after giving a talk there earlier this year on the legacy of colonialism in horticulture and agriculture. Each speaks to her belief in the capacity of nature to restore. “There’s something deeply wounding about our disconnect with nature,” she says, referring to the work she is doing on colonisation and gardening. “The move to reclaiming [the land] from a site of oppression to a site of empowerment is really healing.”

Before I go, Ratinon introduces me to her chickens, Grace Jones, Mimi, Alan Partridge and Ti coule (a term of endearment in Creole). And there is a last trip to the fridge to pull out some small eggs the chickens have laid, as well as another unrecognisable cucumber. Her dad grew up with this particular variety in Mauritius and she wanted him to have them for his birthday. “I got some delivered to him during lockdown.” She’s smiling at the cucumber again. “It’s magic.”