John Reed in Bangkok and Patricia Nilsson in London

International clothing companies including Primark and H&M say they have resumed placing orders with suppliers in Myanmar for the first time following February’s coup.

The UK and Swedish chains, alongside Denmark’s Bestseller, were among the companies that froze orders from the south-east Asian country because of human rights concerns and civil unrest. They now say they are resuming them.

H&M, which says it has more than 50,000 people relying on jobs at its textile suppliers in Myanmar, said it was “now gradually starting to place new orders again”.

“With our decision we want to avoid the imminent risk of our suppliers having to close their factories which would inevitably result in unemployment for tens of thousands of garment workers,” the Swedish company said.

Primark said it was committed to honouring its existing orders from its Myanmar suppliers, “however long they take to fulfil”. It added that it had “recommenced placing some orders with our key strategic suppliers in the country”.

However, European retailer C&A has taken a different stance, telling its suppliers that “we are at this point — unless we see significant improvements within the country — not placing any new orders”. It said some previously placed orders were still being produced in the country, adding that it was not penalising suppliers for delayed orders.

Myanmar has been a chaotic place to do business and posed an ethical challenge for foreign companies since the coup. Telenor, the Norwegian telecoms company, this month wrote off the full $782m value of its Myanmar business, but said it had no plans to quit the country.

Fashion brands have faced global scrutiny for their responses to issues such as the sourcing of cotton from China’s Xinjiang region, which has been the subject of widespread reports of forced labour.

The brands feel they have a commitment to the country, and just cutting and running won’t solve anybody’s problems

In Myanmar, areas of Yangon where much of the garment industry is based were the scene of violent unrest after the coup. In March, several Chinese-run apparel factories that sell to global brands were set ablaze after protesters accused Beijing of backing the military takeover.

However, others highlighted risks to a sector that before the Covid-19 pandemic generated $5bn of annual exports and employed about 700,000 people, many of them female migrant workers, in one of Asia’s poorest countries.

“The brands feel they have a commitment to the country, and just cutting and running won’t solve anybody’s problems,” said Vicky Bowman, director of the Myanmar Centre for Responsible Business.

The European Chamber of Commerce in Myanmar said this week that many of the garment workers who fled violence in Yangon had returned to work.

However, a survey by the group showed that about a quarter of the sector’s workers had lost their jobs and “the situation is likely to significantly worsen by the end of June”.

Proceeds from the garment industry for the most part do not directly benefit the country’s military, unlike industries such as gemstones, timber, and oil and gas. 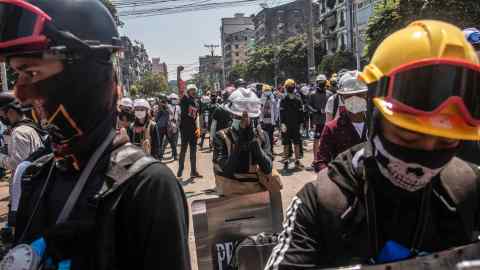 However, Bestseller commissioned an independent investigation into its business in the country to look at investigate the status of three of its factories in an industrial zone linked to Myanmar Economic Holdings, a military-controlled conglomerate that has been placed under sanctions by the US, EU and UK since the coup.

Bestseller, which describes itself as a champion of sustainable development and whose Myanmar suppliers have about 48,000 workers, concluded that the three factories were not on military-owned land and it had not violated EU sanctions. The Danish group also said that it had “started to resume business in Myanmar again”.