Why I’m throwing my jewellery into the Thames

To find a precious gold ring washed up on the bank of the River Thames is the stuff of mudlarker dreams. To fashion a ring from the river’s spoils and then throw it back in is another thing entirely.

But that is exactly what the British jeweller Ruth Tomlinson will do next month, using treasures she unearthed this summer from the London river: deep red garnets, ancient beads, Tudor dress pins, river gravel and sea glass. Out of these she has created a collection of four exquisite gold rings, called OffeRings, which she will cast back into the Thames in celebration of her 20-year anniversary. The hope is that one of them will make it back into the hands of some future treasure-seeker.

Mudlarking is the activity of searching the soft, wet ground near rivers for valuable, historic or interesting objects. In Victorian times, it referred to impoverished and desperate scavengers, usually children. These days, the scavengers are of a more genteel nature. Tomlinson became intrigued when a friend, who had taken up the hobby during lockdown, told her that garnets turn up quite frequently at certain points on the river. “I thought it was incredible that the river was offering up these gems,” says Tomlinson, whose atelier is based off Hatton Garden, less than a mile from the Thames. “I was so excited by the idea of finding treasure that the earth was giving up rather than taking it from out of the earth. And the idea of going down there and using my eye to find them was really appealing.”

No one knows exactly why the Thames has this hoard of red gemstones. They’re found in specific locations on the river, closely guarded by mudlarkers. Stories of how they came to be there range from the dramatic – failed heists, lost or stolen spoils from an East India Company fleet – to the mundane: garnet powder is used as an industrial abrasive.

Tomlinson attained her mudlarking licence this year, and over the course of a month went to the Thames foreshore several times, looking for the microscopic. Her designs are often inspired by tiny flecks of lichen, granules of stones or the nodules on sea coral, so she took to mudlarking like a natural. “At first, the garnets looked like gravel. Some of them aren’t very good quality and have a rough surface and it’s only in the right light that you see their deep red colour,” she says. “Some are more of a crystal form with natural facets on the surface and have almost been tumbled by the river, which has kept them smooth and shiny. The ones I found are a carat in weight, which is 0.2g, so on the smaller size. Other people have found bigger, but the small ones are good for my work.”

Close to the garnets, Tomlinson also came across Tudor brass pins. “They were used to hold clothes together and were handmade by women and girls. I found it incredible that someone had crafted these tiny things so many years ago and I could hold them in my hand.”

The four rings she has created from these finds honour the objects’ history as well as incorporate Tomlinson’s signature “organic” feel. The Ode to the Craftsperson is made in 18ct gold and features four garnets and a handful of dark metal pin heads, surrounded by gold “lace” filigree; Mudlarkers is a white-gold ring set with almost-black garnets and gravel, examining ideas of preciousness and value and the experience of mudlarking; Destiny of the Thames Garnets is made in a paler 14ct gold and set with garnets and garnet powder, representing the stones’ potential past use; while Time Capsule, in 18ct gold, features pre-Roman green and yellow-glass beads, combined with modern broken glass, “which almost looks like peridot”, as well as shells and rusted metal. “I loved the idea that this ring had elements in it that have taken thousands of years to create.”

Previously, Tomlinson has looked to idyllic underwater seascapes and coral reefs for inspiration. “But this was a project about seeing what is under our feet, in a way,” she says. “Yes, the Thames is a bit dirty – I did wear gloves and use tweezers – but I love the idea that if you look closely you can see the beauty and find these treasures.”

HTSI
Zandra Rhodes: ‘There’s nothing like a pot or a fantastic piece of china’ 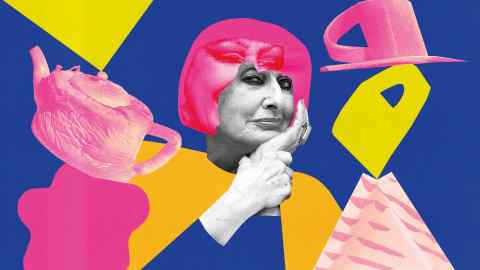 Bespoke commissions by Tomlinson start at £5,000 so some might gasp at the idea of casting these now precious pieces back into the Thames’ murky waters. But mudlarking finds are the property of the City and the Crown, so cannot be commercialised – and for Tomlinson the gesture simply adds further mystery to the origins of the treasures. “It feels liberating,” she says, “not knowing what will happen to the rings. That in a few hundred years’ time, someone might find one.”

Thames OffeRings will be available to view at Ruth Tomlinson’s atelier on Thursdays and Fridays, 9am-5pm, from 28 October to 19 November. No appointment necessary. Ruth Tomlinson, 10 Hatton Pl, London EC1; ruthtomlinson.com