It’s a good job his stories earned a fortune because, as a new biography reveals, the author had very expensive tastes

The “real beauty” Roald Dahl described to his American literary agent, in a letter of June 1960, was an antique mirror, “a seven-foot-high carved Chippendale one with delicate leaves and branches and birds on it”. He was restoring it himself. Slowly. “I am presently and patiently scraping one-eighth of an inch of plaster off it to reveal the gold leaf underneath. Five hundred hours’ work.”

Mid-18th-century Chippendale, lavishly and painstakingly regilded, was quite to Dahl’s taste. In 1960, the fortysomething author had yet to publish any of those novels for children that, two decades later, made him a household name across the globe. By the late 1980s, Dahl’s paperback sales in the UK exceeded two million books a year – but in the summer of 1960, the man who lovingly inventoried his latest restoration project, warning his agent that “that’s all the work I am doing at the moment”, had produced only three collections of adult short stories. Highly regarded in the States, they had garnered polite reviews at home where Dahl was better known as the husband of soon-to-be Oscar-winning actress Patricia Neal. Dispiriting royalty cheques did not diminish his relish for towering giltwood looking-glasses. An earlier purchase had revealed, on cleaning, “a brilliantly painted frame full of grotesque heads and shells and fishes”: the work, Dahl decided, of Chippendale’s follower Matthias Lock.

Over the course of his life, beginning long before he became a rich man, Dahl collected and restored a number of sumptuous antique mirrors, bought (and in several cases resold) exceptional paintings and hardened the conviction that he shared with his third daughter, Ophelia, when her teacher set her an essay titled “the best things in life are free”, that many of the best things in life were anything but. In her novel Working For Love, another daughter, Tessa, identified an interest in “paintings, furniture, music or wine” as central to any civilised marriage. As Tessa had seen for herself, they were her father’s interests. In a doggerel rewriting of Goldilocks and the Three Bears, Dahl once described a “houseproud wife” who “collected lovely things/Like gilded cherubs wearing wings,/And furniture by Chippendale/Bought at some… auction sale”. The housewife’s glamorous magpie clutter and her shopping sprees at country auctions were his own.

He bought a painting every time he sold a story

Dahl was the son of a self-made man whose first love had been painting. In the 1890s, Harald Dahl, who had left his native Norway for an artist’s life in Paris, moved to the docklands of south Wales, where he founded a company of shipbrokers. By the time of his death from pneumonia in 1920, when Roald was three and a half, he had amassed a sum equivalent to £7mn. On the walls of his large farmhouse hung works by Laura Knight, Frank Brangwyn and the Barbizon School landscapist Charles-François Daubigny; among the bibelots littering tabletops and the Bechstein grand piano was the silver and tortoiseshell paper knife Roald later kept in his writing hut. Roald would recreate this plush existence at Gipsy House, “the small Georgian house with five acres” in the Buckinghamshire village of Great Missenden that he bought in 1954 for £4,250.

Roald attributed his interest in art to Harald, and a childhood surrounded by the fruits of his collecting. Later, others sharpened his visual instincts, including English fauvist Matthew Smith, whom he met in 1941 and who painted Roald’s portrait in his RAF pilot’s uniform. In 1944, Roald embarked on an affair with an American oil heiress, Millicent Rogers. Any romantic attachment he felt was eclipsed by admiration for her art collection: paintings by Degas, Renoir, Gauguin and, in one room, a dozen pictures by Boucher.

HTSI
The world’s most wonderful libraries: the readers’ picks 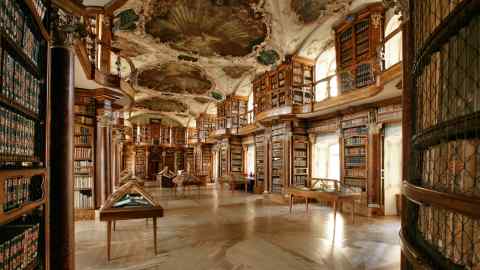 In postwar New York, Roald, too, acquired impressionist and post-impressionist paintings. “In those days fine pictures were inexpensive,” he remembered. “Many paintings that today could only by acquired by millionaires decorated my walls for brief periods in the late ’40s – Matisses, enormous Fauve Rouaults, Soutines, Cézanne watercolours, Bonnards, Boudins, a Renoir, a Sisley, a Degas seascape.” Typically, he bought a painting every time he sold a short story. Since he worked slowly, he ran out of money before the next was completed, and “would invariably have to sell the picture I had bought six months before”.

Later, he was luckier. In 1967, Roald paid £2,850 (about £73,000) for Francis Bacon’s Study for Head of Lucian Freud, one of four pictures by Bacon he owned; his family sold it in 2014 for £11.5mn. Other purchases found their way into the “sacks full of presents” his sister remembered him showering on his family. He enjoyed sharing his passions: his stepdaughter, textile designer Neisha Crosland, has acknowledged how Roald’s enthusiasm for Russian avant-garde painters such as Liubov Popova influenced her work.

Dahl once listed his delight in his surroundings at Gipsy House: new plantings of roses, bright shoots of young spinach in the vegetable beds and, in the orchard, budgerigars that roosted in a new octagonal birdhouse. Simple pleasures compared with his fondness for Chippendale, Bacon portraits and Château Lafleur. Unobtrusively costly, nevertheless.

Matthew Dennison’s Roald Dahl: Teller of the Unexpected is published by Head of Zeus on 4 August at £9.99