We’ll send you a myFT Daily Digest email rounding up the latest Tunisia news every morning.

Nightly riots by Tunisian youths this week have underscored the depth of the economic crisis in the Arab world’s only democracy as it grapples with rising poverty and widespread unemployment.

Violent protests have swept at least 15 cities and police have clashed with teenage demonstrators, using tear gas and water cannon to disperse stone-throwing youths. Hundreds have been arrested and the army has been deployed to prevent the looting of shops and banks.

“These are teenagers protesting and there is despair and a sense of lack of perspective over what their future will look like. It comes on top of the economic stress of the pandemic and the lockdowns which makes the situation flammable.”

The explosion of anger — sparked by footage of police mistreating a shepherd — comes as the country marks the 10th anniversary of the revolution that toppled Zein el-Abidine Ben Ali, the long-serving dictator.

But Tunisians are not in a celebratory mood, as the coronavirus pandemic further scars an economy that has been ailing for a decade.

The economy contracted last year around 8 per cent, according to rating agency Fitch, its biggest drop since independence in 1956. Economic growth since the revolution has averaged 1.8 per cent — not enough to dent high unemployment levels, especially among the young, where the jobless rate reached 36.5 per cent in 2020, according to the International Labour Organization.

The pandemic has decimated the country’s crucial tourism industry, cut exports to Europe, Tunisia’s main trading partner, and caused thousands of companies to shut down, according to the government and international organisations. Tourism revenues plunged 65 per cent in 2020 and a recent survey by the International Finance Corporation showed that 5.4 per cent of Tunisian firms had permanently closed because of the health crisis.

Officials have hinted they will seek an IMF loan because the country’s external financing needs have shot up. Fitch expects public debt to reach 89 per cent of gross domestic product in 2021 — up from 72.5 per cent in 2019. Increased government spending to mitigate the impact of the virus has driven up the budget deficit to an estimated 10.5 per cent of GDP, from 3.3 per cent the year before, according to Fitch.

But IMF borrowing would hinge on painful reforms that previous governments have not been able to implement.

“The immediate priority is to save lives and livelihoods until the effects from the pandemic wane,” said Chris Geiregat, IMF mission chief for Tunisia. “[But] restoring sustainability to public finances is something that cannot wait and this needs to start happening this year.”

FT Magazine
The lost decade: voices of the Arab spring on what happened next 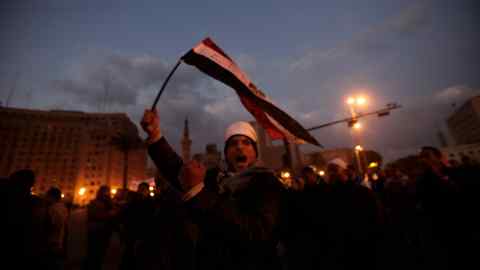 Areas for reform include the civil service wage bill, which at 17.6 per cent of GDP is “among the highest levels in the world”, energy subsidies and lossmaking state-owned enterprises. “When you have little or no fiscal space you will need to strictly prioritise your spending for health and social protection and that means that something has to give,” Mr Geiregat said.

The high turnover of governments — there have been 10 since the revolution — has further hampered reforms. Many have been underpinned by weak coalitions in fragmented parliaments, with no single party holding a majority.

“Meeting IMF conditions will be difficult, given previous flare-ups between unions and the government over public sector salaries,” said James Swanston, Middle East and north Africa economist at Capital Economics, the London-based consultancy.

“Given the global pandemic and the likelihood of increasing consumer prices, the unions might demand pay hikes again and the government might feel it has little option but to succumb to the pressure.”

While coronavirus has exacerbated the crisis, Hichem Mechichi, the prime minister, said in a speech in November that the country’s economic woes were only partly caused by the virus.

“Our country has not been able to establish an economic route which enables us to emerge from the economic difficulties we experienced since 2011,” he said, pointing to what he described as “a loss of hope in the future” exemplified by the increasing numbers of Tunisian illegal migrants making the perilous sea journey to Italy.

The government’s response to protests has attracted criticism. “Poverty, marginalisation and exclusion should be dealt with through fairness and dignity, not smears and criminalisation,” said the Tunisian Forum for Economic and Social Rights, a civil society group

The deteriorating economy has undermined confidence in the political system and the politicians who emerged after the revolution. This has contributed to the meteoric rise in the opinion polls of Abir Moussi, a controversial party leader and former official in Ben Ali’s ruling party. She has been able to tap into a well of nostalgia for a period of perceived economic stability under dictatorship.

“Democracy is not yet under threat but it needs to deliver for people,” said Ms Ben Abdelkarim.

“They have to see that it can create better lives for them. There is a danger that people will stop believing in this. We are not there yet, but the government can at least start with reforms that are not controversial like cutting bureaucracy to make it easier for foreign investors to come here.”

Get alerts on Tunisia when a new story is published