Kim Kardashian has agreed to pay $1.26mn to settle charges with the US securities regulator for promoting a cryptocurrency without revealing that she was paid to do so.

The US Securities and Exchange Commission on Monday said the reality TV star did not disclose a $250,000 payment she received to post about crypto security tokens sold by EthereumMax on her Instagram account, which has 331mn followers.

Kardashian last year asked her then 225mn followers: “Are you guys into crypto????” in an Instagram post that drew attention to EthereumMax, a new coin at the time.

The post reverberated throughout the financial markets for its extraordinary reach and was emblematic of a ballooning trend involving celebrity endorsements of cryptocurrency assets.

But the EthereumMax tokens shed 70 per cent of their value a week after the post, triggering a separate class-action lawsuit that accused Kardashian and other celebrities of helping boost the coin’s price in a scheme that benefited its backers and hurt investors. The case is making its way through a federal court. Kardashian’s lawyers did not comment on the claims when the lawsuit was filed earlier this year.

SEC chair Gary Gensler said in a statement about the regulator’s probe: “This case is a reminder that, when celebrities or influencers endorse investment opportunities, including crypto asset securities, it doesn’t mean that those investment products are right for all investors.”

The settlement follows warnings by the SEC related to celebrities publicising financial instruments. Last year, the regulator published an alert telling investors it was “never a good idea to invest in a [special purpose acquisition vehicle] just because someone famous sponsors or invests in it or says it is a good investment”. In 2017, the agency also called for caution around stars, some of whom have been charged by the SEC, using social media to promote initial coin offerings.

The case is also related to the fraught debate around what constitutes a digital security and the breadth of the SEC’s jurisdiction over crypto assets. Gensler reiterated his position to CNBC on Monday: “The law is clear. I believe based on the facts and circumstances most of these tokens are securities.”

Kardashian — who neither admitted nor denied the SEC’s findings — violated the anti-touting provisions in US securities laws, the agency said. 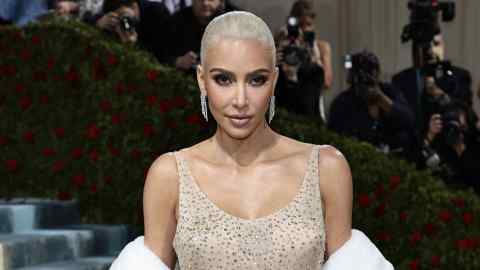 Her Instagram post read: “A few minutes ago Ethereum Max burned 400 trillion tokens — literally 50% of their admin wallet giving back to the entire E-Max community,” according to the SEC’s order. The message included a link to the issuer’s website, which had instructions on how to buy the tokens, as well as “#AD”, a term understood to indicate advertisements.

As part of the settlement, for three years Kardashian may not receive compensation for publicising digital security tokens and has agreed to continue collaborating in the investigation, the SEC said.

A lawyer representing Kardashian said she had “fully co-operated” with the SEC and was willing to continue assisting the regulator, adding that she was “pleased” to have resolved the matter.