One day in the late 1980s Maryvonne Pinault, wife of tycoon François, was leaving the Louvre when the ever-gallant Hubert de Givenchy offered his arm and walked her to her car.

She recalls this in the short introduction she wrote for the catalogue of the forthcoming auction of her late friend’s collection at Christie’s in Paris. “That day we began a conversation about the ineffable nature of le grand goût français, a conversation that continued until his last days. It was the start of a long and warm friendship, nourished by our passion for works of art.”

Givenchy as fashion designer is famous. He founded his own business in 1952 aged just 25. A year later he met Audrey Hepburn and so began the best-known couturier and muse relationship ever to inspire a runway collection. It was for her that he designed a Little Black Dress and the fragrance L’Interdit. Six foot six with patrician good looks and searching eyes of cornflower blue, he was as devastatingly good looking as he was talented.

He left fashion in 1995; Givenchy is now part of LVMH. But by the time he took Madame Pinault’s arm he was already deeply immersed in a second career as an arbiter of the best French taste; the world of Parisian hôtels particuliers, turreted châteaux and long, light-flooded gallery-like salons, alive with the glint of ormolu and the glow of polished mahogany.

Now, following the death in 2021 of Givenchy’s long-time partner, Philippe Venet, Christie’s has been tasked by Givenchy’s nephews, LA-based JP Morgan banker Olivier Taffin de Givenchy and his brother James, founder of the jeweller Taffin, with dispersing his collection. More than 1,200 objects from Hubert’s 16th-century Château du Jonchet in the Loire Valley and his Parisian home Hôtel d’Orrouer will be crossing the block in a variety of sales, the centrepiece of which is the evening sale of chefs-d’oeuvre: chiefly modern art (Picasso, Miro, Giacometti etc) and exquisite 18th-century French furniture of the type that has slipped from fashion.

Olivier hopes that this sale will refocus attention on the furniture his uncle loved. “I think it’s going to open the eyes of a lot of designers and show how you can be a lot more creative mixing different styles. One of the ideas I had around the collection was to find an LA midcentury home and show people that you can put a Louis XVI bureau plat in it with a great Basquiat on the side and a view over the city. Everything can work if you have a vision for it.”

And if the man he fondly refers to as “Oncle Hubert” (pronounced like Pooh Bear without the P) had anything, he had vision. Olivier recalls visiting Jonchet as a teenager just after his uncle had bought the Château in 1976. “He had looked at it for years before he could afford it and the story he told us was that Onassis was once going to buy it for La Callas.”

“Just entering those rooms was so beautiful, and I still remember the smell. There was always a Rigaud candle lit somewhere.” Aged 15, he recalls being impressed by the way his uncle resolved grandeur and comfort: the kind of room in which a Jacques Lipchitz sculpture or a writing desk made for Versailles might sit next to a white sofa with dog hair on it. “It was all about balance of antique and modern. He had the ability to make a room not feel decorated. There was no feeling that everything had been planned. He began with a vision and over time he filled up his vision with the objects he found.”

It was the same with houses. Take his skiing chalet. He found the chalet in Switzerland and the view in Megève. “He bought seven hectares of land, and he brought a chalet that he had found in Switzerland, and he rebuilt it with a view of Mont Blanc. It wasn’t very big, but it was just perfect.”

It did not need to be the biggest. Olivier has particularly fond memories of holidays in the ’80s sailing around the Greek Islands dropping in on Niarchoses and Livanoses aboard the yacht Oncle Hubert had bought from the Rothschilds: “That boat was about 25m, so not too small, but wherever we stopped you would see these huge boats and ours was always the tiniest. We felt like the poor relation, but now looking back I think we were the most elegant.” Likewise, when he bought an apartment in New York it may not have been big, but it was at the Carlyle.

There was also a villa on Cap Ferrat, as well as an apartment in Venice and yet there were more objects than there were houses in which to arrange them. “He would visit artisans and commission plates and glasses. He didn’t need them. But he bought a lot of them because he liked to support these little artisans. When we went to Venice and visited the famous glassmaker SALIR, [son of the founder] Mario d’Alpaos, who was in his 80s, took a picture with me to thank me for what Oncle Hubert had done for him.” 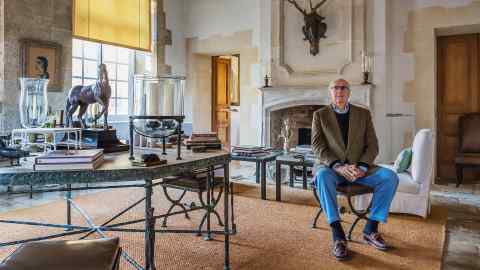 Hubert would always buy the best; and it was a lesson he taught his nephews. “His message was: ‘Extend yourself if you have to, but buy the best. It will be worth it in the long run.’”

It is probably advice that is worth bearing in mind if you intend to join the bidding for his collection.

Live auction in Paris from 14 to 17 June and online sale open for bidding from 8 to 23 June,

Get alerts on Collecting when a new story is published