An illumination of creatives are giving the medium fresh purpose

“Neon was used as the sign for forbidden pleasures – from ice-cream parlours to strip clubs,” says Turner Prize-winning artist Douglas Gordon. “It is seductive, and at the same time there’s a warning… It represents danger, both visually but also chemically. The arcing electricity will fry you to death for inappropriate thought…”

Gordon is one of a number of contemporary artists who use neon – from Tracey Emin’s handwritten sentences to Mary Weatherford’s canvas and strip lighting combinations. It first made its mark in the art world in the 1960s – pioneered by the likes of Joseph Kosuth and Bruce Nauman – and its presence at the moment is particularly playful. At September’s Armory Show in New York, a smattering of neon ran from Emin’s pulsating pink How it Feels to the joyful text-pattern mash-ups of Marinella Senatore advising us to Dance First Think Later and Chilean artist Iván Navarro’s tunnel-like illusion.

The chemical element neon – a colourless gas that glows red when placed in an electric field – was discovered in 1898 by British chemists Morris Travers and William Ramsay. “The blaze of crimson light from the tube told its own story,” wrote Travers of the curious natural phenomenon that was first manipulated into neon lighting by French engineer Georges Claude in 1910. After creating different-coloured lights with different gases – including mercury vapour and argon – Claude exported his patented invention to the US in 1923, setting alight a neon craze that forever changed the cityscape, beginning with his effervescent signage for the Packard car dealership in LA. “Neon is the only piece of modernism that left Paris, skipped New York and went straight to LA,” says Weatherford. Photographer and artist Steve Fitch has documented the neon landscape of the American West since the 1970s, most recently in the book Vanishing Vernacular (while also creating his own neon artwork).

Old-school neon lighting flickers evocatively between the nostalgic and the sleazy. It’s seaside towns and candy floss. Retro diners and the Blackpool Illuminations. Liquor and cocktails. Soho. And Girls. Girls. Girls. For artists working today, these are tropes waiting to be taken in a new direction, as they both play with its lowbrow associations and transcend them.

“Bending light is so powerful and magical,” says LA artist Lisa Schulte, who runs Nights of Neon in a vast 20,000sq ft studio and has been making retro-style signs for the film and TV industry for the past 40 years. Her own sculptures, meanwhile, combine driftwood and other organic material with predominantly white neon. “I want to show a different face of neon than the typical palm tree or flamingo, to take it in a direction that shows the beauty of this light source.”

“Sublime and serious at the same time,” is how Mostyn art centre director Alfredo Cramerotti describes Cerith Wyn Evans’s bright-white hanging clusters of poetic lines, currently on show in the Welsh gallery. While they appear abstract at first, “some of the new forms are taken from ancient scripts. It’s a way of writing in 3D”.

“It’s the least deadpan way to take in information,” suggests Douglas Gordon of the medium. For Richard Jackson, neon is a counterpoint to the “high-minded secret language that has been around since minimalism, that only people in the art world or with an education can understand. I would like everyone to get something from my art,” says the 83-year-old Californian artist, whose current show at Hauser & Wirth Zurich showcases his neon wordplay works such as Art Fair Party (2014), with its extra “F” flashing up periodically in front of the “Art”.

“Neon offers the most poetic way to express intensity of emotion,” says Madagascan artist Joël Andrianomearisoa. “Light and electricity can be unreliable and frustrating at my home in Antananarivo, so it’s perhaps not surprising that I have become fascinated by it. For me, it is a symbol of hope.” His works have graced the façades of Paris’s Palais de Tokyo and Prague’s Kunsthalle, and featured in the recent Noor Riyadh festival of light and art.

For British-Pakistani artist Shezad Dawood, neon is linked with childhood memories of Karachi, where “the evening haze would seemingly pulsate and radiate with neon signs, from Sufi shrines to kebab shops’’. His recent display at Frieze London featured works from his Disposable Mementoes series, combining neons of marine species with painting and collaged beach towels and sarongs to question the ecological impact of coastal tourism. Ethiopian-American multimedia artist Awol Erizku uses neon to reference Hong Kong’s streets or ancient Egypt, while also highlighting issues of race and identity. His piece Nefertiti (Black Power) is currently on view at the Sainsbury Centre in Norfolk.

When self-titled “Punjabi Liverpudlian” and “radical feminist” Chila Kumari Singh Burman illuminated the front of Tate Britain with a joyful mish-mash of rainbow-coloured drawings in November 2020, her intricate glowing imagery was inspired by her Indian heritage – from martial artists and dancers to Hindu goddesses, a tiger and her dad’s ice-cream van. It became a public beacon when the museum was closed. “I knew we were heading into a dark tunnel; I wanted people to feel there was light at the end,” says Burman. Currently, her work is on view at Bordeaux’s CAPC Musée d’Art Contemporain and in Doha, as part of Britain’s cultural exchange during the World Cup.

Burman uses LED-based “silicone neon”, as well as glass. But for Gordon and his neon fabricator Kerry Ryan – who founded London workshop Neon Specialists in the 1980s – LED is not true neon at all. “At the end of the day, LED is a plastic light,” says Ryan, who saw the neon-sign business suffer when the new technology first came on to the market about 15 years ago. “There are some good LED ones now, but neon is completely different. There’s no comparison, even from a distance. It gives neon a bad name.”

Other creatives, however, see positives to LED signage. Scottish artist Robert Montgomery began making his often-site-specific, poetic text works in neon but has since “pioneered a more energy-efficient and ecological alternative”, he says. “I’ve developed an LED made from recycled PVC, and low-consumption LED lights that can be powered from solar panels. At the same time, I’m trying to keep the romance of old, classic neon.” His LED piece on semi-permanent display at the contemporary art centre La Condition Publique in Roubaix reads: “Love is the revolutionary energy that annihilates the shadows and collapses this distance between us.”

But it’s the drama and danger of crafting “true” neon that is a major draw for Gordon, who first happened upon “one of the last, great neon workshops” next to the dole office in his hometown of Glasgow. “I went in and this old fellow was in there, lighting bits of newspaper off his burning cigarette, sticking them into the glass pipe and turning on the gas,” he recalls of a process that today is no less hands on but is slightly less hazardous – there’s a general move in the industry to phase out the use of mercury, says Ryan, while Senatore states she uses “glass tubes with mercury-free gas mixture”.

“The equipment for bending neon is exactly the same as it was in the 1920s,” says Ryan. At his Hackney showroom, he demonstrates how the glass tubes are heated over a naked flame and then bent by hand while blowing into the tube, so that it doesn’t collapse. “All our glass comes from Murano,” says Ryan. While clear glass is used to show off the distinctive red glow of pure unadulterated neon, the glass tubes also come in a range of “true, beautiful, deep, luminous colours – cobalt blue, ruby red, sunflower yellow, emerald green. So if you mixed green glass with the red gas, it would give you an orange. Red glass with a blue gas like argon gives you purples and violets”. He opens a metal briefcase to reveal the full spectrum, including one he calls “Tracey pink”, after Emin. 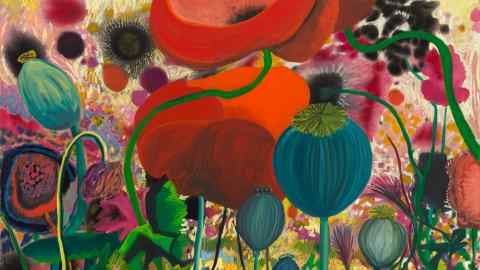 This month, Gordon is showing new neon works in London at Gagosian’s Davies Street gallery. Neon Ark is based around a series of text-based pieces: snippets of song lyrics, they prompt the viewer to come up with the next line. In collaboration with Ryan, Gordon has orchestrated a live neon-making demonstration at the gallery, creating a spectacle to chime with the city’s Christmas lights.

But the workshop also highlights the craft of the medium at a critical time. “Nearly all my glass-benders are now aged between 60 and 70,” says Ryan. “There are no young glass-benders even on the horizon.” To master the craft involves an eight-to-10-year apprenticeship, and to this end, Ryan is in the final stages of setting up a neon workshop and training facility in a former nightclub in Margate. Schulte, meanwhile, is establishing a scheme with the Museum of Art and History, in Lancaster, California; she plans to gift it her entire neon estate – some 4,000 pieces – “with the promise that they will set up a school to teach this art form”. The glow must go on.