The Fountain of the Four Rivers, smack bang in the middle of the grand Piazza Navona in Rome, is a chaotic mass of human figures, flora and fauna, set about an imposing obelisk. The sculpture, by Gian Lorenzo Bernini, is typical of the expressive, overly decorative style of baroque that has shaped the Eternal City – from statues to balustrades to table legs.

Lucia Silvestri came across this scene one morning while searching for ideas for Bulgari’s latest high-jewellery collection. The creative director was drawn to the roughly hewn rock on which the figures sit, calling to mind the contrast between the uncut gems and the final, polished stones in each of her pieces. Among the commotion she also spied a snake, a motif intertwined with the house’s codes. She immediately pulled out her phone and sent pictures to her creative team.

The resulting collection, Barocko, morphed into a celebration of the sumptuous curves, vivid hues and arabesques of the 17th- to mid-18th-century movement. Baroque as a style isn’t something Bulgari has frequently explored, even though it is as intrinsically linked to Rome as the jewellery house itself. “The theme was one that we had in mind a few years back, but we thought maybe it was too obvious,” says Silvestri. “But we are baroque, and we’ve never done something specifically on it, so it was a natural evolution.”

Although it was conceived well before the turmoil of this year, the theme comes at a time when calls to support Italy and its craftspeople are more urgent than ever. The collection totals more than 120 one-off jewels (all POA) and spans three series: Meraviglia, Luce and Colore. It also pays tribute to the specific artists who shaped the baroque movement – Bernini, but also architect Francesco Borromini and painter Caravaggio. One necklace, the Chiaroscuro, is a geometric tiling of round, brilliant-cut and pavé diamonds punctuated with seven vibrant gemstones – including rubellite, green tourmaline and tanzanite – and is named after the technique employed by painters to contrast light with dark. Another piece, the Festa ring, features a 7ct mandarin garnet at its centre, designed to imitate the succulent fruit in Caravaggio’s still-lifes. And the Pink Twists necklace, a cushion-cut 58ct rubellite suspended on a chain of curling pavé-set diamonds, references the gilded frames and mirrors typical of the period.

In the Luce series, necklaces and earrings mimic the tapering shape of feathers – inspiration plucked from the plumage of peacocks. Such non-native plants and animals were a point of fascination after the Romans began trading with east Asia, and were often depicted in baroque paintings or represented as motifs in decor. The Wonder Peacock necklace is an ornate example, with teardrop tanzanites and circle-shaped emeralds studded with diamonds to mimic the “eye” of the feathers. This is one of Silvestri’s favourite pieces. “I love the combination of colours and the different shapes – pear, round, cushion. There is everything, but in a very harmonical way,” she says. “It was a piece that I followed from the very beginning of the process, and the craftsmanship took more than 1,500 hours.”

Bulgari’s iconic Serpenti is naturally present: a white‑gold and pavé-diamond bracelet coils around the wrist, with an elongated tongue that protrudes across the hand and connects to a ring. The snake’s head is also embellished with a mighty, 10.14ct teardrop diamond.

If high jewellery showcases the top tier of skills, gemstones and design a house can wield, then Barocko is Bulgari’s most impressive to date. “Value-wise, it’s probably the richest we’ve ever put together,” says CEO Jean-Christophe Babin. “If you look at the cost of the gems and of the craftsmanship, which we measure in the thousands of hours per piece, if we combine those two parameters, it is the richest we have ever displayed.”

And demand for such extravagant pieces still exists. What has changed, Babin says, is the way in which their customers are buying such jewels. “The way to access luxury, to process luxury, to live it, is changing. The bestseller is the pendant – this has not changed. What has changed is the country where you buy and the channel you use.” This is in line with the LVMH-owned house’s new strategy to focus on selling in local markets – especially China – instead of relying on existing customers to travel to Europe for their purchases. 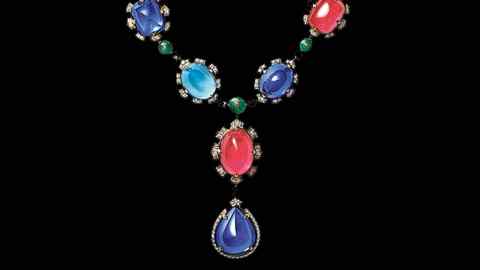 But that didn’t stop the house from launching Barocko with a suitably grand salon-style show and dinner in Rome in September, even if some of their usual high jewellery clients couldn’t travel to be there. The event, held in the privately owned Palazzo Colonna, was about painting the whole picture of the collection and bringing glamour back to a year in which such things have been lacking. “We need beauty after this time and to enjoy the quality of life, of course,” adds Silvestri. “I hope people wear the collection with joy.”