Roll back the gears: Japanese classic motorcycles zoom back into focus

Classic-bike insurer Hagerty says high-end collectors are adding ’70s and ’80s Japanese motorcycles to their stable at a pace. In 2018 they made up around 24 per cent of bikes in a UK-based collection of five or more vehicles. And it’s remained stable now, even given the commercial down-pressure of Covid.

Over in the US, Japanese bikes have been drawing the strongest buyer interest of any genre at the huge Mecum Las Vegas Motorcycle Auction; last year, average prices increased to $7,000, up 17 per cent since 2018.

The driving force in the UK is nostalgia-fuelled forty- and fiftysomethings: “People who had, or wanted, a Japanese motorcycle in their teens are rediscovering and buying the bikes they or their envied friends owned,” says Mark Bryan of H&H Classics, which has an auction on 28 April at the National Motorcycle Museum. “To some, ‘classic’ means an early-’70s bike that is almost entirely metal,” he adds. “For others it’s a late ’70s or early ’80s plastic model.”

Ben Davis, 55, an engineer from Towcester, has an ’80s Suzuki PE400. “I spent my youth envying guys who had bikes I couldn’t afford. A boy who lived nearby had a Suzuki PE175 – off-road, purposeful, very yellow. When I bought one recently I got even by making sure it was the most powerful version.” He laughs: “Most blokes will cite envy and reminiscence when they buy a ’70s or ’80s bike.”

The rugged off-road PE had acres of plastic. But some of the hottest bikes on the market are the compact and streamlined 1980s (and even early-’90s) race-bike-related superbikes with plastic bodywork: Suzuki’s RG500 and GSX-R750F, Honda’s VFR750R RC30, Kawasaki’s ZXR-750R and Yamaha’s FZR750R, all upwards of £15,000.

In the UK, mopeds are also in huge demand. So if at 16 you were lucky enough to have a Yamaha FS1-E “Fizzy” or Honda SS50, you’d be a lot luckier now if you still had it. Back then, the next step was a Japanese 250. Or, if you couldn’t afford it, a 125. At least it wasn’t a 50. Engine size aside, none of them were recalcitrant, oil-spewing lumps of British engineering hewn from melted-down tanks and steam engines. Yamaha RD250s, Suzuki GT250s and Kawasaki KH250s were reliable, stylish, fast – and inexpensive.

But the equation involving “fast” and “inexpensive” often equals “disposable”. Many were thrashed and fell apart. Many models are extinct. Expect to pay £5,000 to £6,000 for surviving, well-maintained versions of that trio, while entry prices for a pre-1980 Yamaha DT250 or an early-1970s Honda CB350 needing work are around £2,000. But budget £23,000 for a beautifully restored, highly desirable Kawasaki 900 Z1.

For those buying their first Japanese classic, Richard Proudman of the Vintage Japanese Motorcycle Club suggests investing in the best example possible, and taking along someone who knows their stuff, including the availability of spare parts, which can drive up costs.

The smaller pre-plastic bikes, which made it beyond the handful of years when abuse and tinworm took their toll, are still amassing value, and are good market-entry bets, says Ben Walker, motorcycles specialist at Bonhams, which runs the big Spring Sale at Staffordshire County Showground, pushed back this year to 3-4 July. “This includes ‘trail’ bikes. Designed for light off-road use, they took off in North America in 1969, and the UK in the early ’70s, and are much sought-after.”

He advises looking for bikes originally supplied by a UK dealer. “There’s a premium on UK bikes, more so if they’re original, with full history.” Some buyers “prefer the patina of a machine with stories to tell, and to ride them; others the perfection of a machine they’ll happily look at for hours.”

HTSI
On your bike, son – family bonding on a motorbike 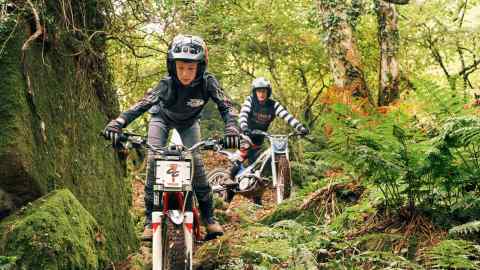 “Trailies are great fun and mean you can venture to places a road bike can’t,” adds Mark Redfern of importer Somerset Classic Motorcycles. “The US is the go-to source. Though many US bikes were exported back to Japan, where there’s a ready market, there are still trail bikes – ‘enduros’ in the US – to be found there.” He currently has several trail bikes for sale, including a mainly metal 1974 Yamaha DT250 at £3,495 and a largely plastic 1979 Honda XL500 at £3,595.

Such was the impact of the first trail bikes that the Society of Automotive Engineers of Japan named the 1968 DT-1 250 a “Landmark of Japanese Automotive Technology”. “Find one if you can,” challenges Redfern. “Regardless, importing bikes involves a weeks-long process to get them UK registered. Dealers often complete the process during the time it takes to ship one here, and will deal with import duties and suchlike. But… owning and using a Japanese classic is immensely rewarding. Go time travel.”