The number £1.5tn is big — at least in a UK context. It is 40 per cent of the UK institutional asset management market, two-thirds of gross domestic product and about the size of the government’s total debt, after stripping out bonds held by the Bank of England.

This is the quantum of liabilities held by UK pension funds that have been hedged with so-called Liability Driven Investment trades, according to the asset management trade body The Investment Association.

LDI is big business, having more than tripled in size over the past decade, and the reason is simple — it helps funds manage the risks in meeting their pension promises for members, partly through derivatives.

But now funds are facing calls from counterparties to put up collateral to fund those trades. The sums are potentially huge and asset sales to meet the calls could have a knock-on effect to markets such as equities.

For the past 25 years, the fall and fall in long-dated bond yields has delivered a costly headwind to pension funds. Thousands of firms that sponsor defined benefit pension schemes — typically now closed to new entrants — have seen the accounting value of their liabilities soar. When bond yields fall, the present value of those future liabilities is discounted at a lower rate.

Pension schemes can’t control wild swings in their liabilities’ value. But they are not completely helpless. They can invest their assets so that they become relatively indifferent to bond market gyrations, and this is where LDI comes in.

As bond prices determine the valuation of pension liabilities, moving pension assets into bonds will effectively hedge the volatility of liabilities. The problem is that few pension schemes are well-funded enough to make this trade. Instead, schemes invest a portion of their assets in liability-matching bonds and a portion in growth assets — corporate credit, equities, property. They then hedge the risks of that strategy with derivatives, using bond assets as collateral.

The hope is that growth assets will deliver decent returns and make them fully funded while the derivatives will desensitise them to future interest rate swings. The results have been good, but have also left pension funds as counterparties to enormous quantities of leverage in the financial system.

Despite £1.5tn invested in LDI strategies, UK pension funds remain under-hedged. As such, while the rise over recent months in yields on long-dated bonds has been awful news for return-seeking holders of them, it is great news for pension scheme funding.

Since the end of 2020, long gilt yields have increased by 1.7 percentage points, helping to take a third of UK DB pension schemes from deficit to surplus. The UK’s Pension Protection Fund has estimated that system-wide pension funding has improved by £350bn over that time.

But accompanying this rise in yields are large losses and collateral calls for schemes engaging in leveraged LDI derivative trades. How large? An upper-end estimate, if LDI was implemented entirely through derivatives, would be a collateral call of over £380bn — but in truth we don’t know the precise mix of bonds and derivatives deployed. 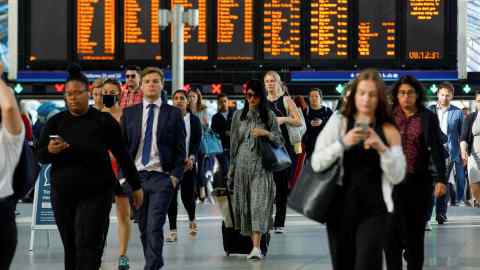 To be clear, this was the plan: losses should match declining scheme liability values. As such, funding ratios should be unaffected. Furthermore, schemes engaging in LDI will have stress-tested rising yield environments and have collateral suitably sized to withstand such a shock. However, bond yields have risen more than standard stress tests envisaged — largely or entirely wiping out scheme collateral buffers. Those schemes with depleted excess collateral buffers now face decisions as to how and when they will restore them.

Does this matter? LDI managers claim that their activities pose no systemic risk, and I read the Bank of England financial policy committee’s silence as agreement. But UK pension funds are collectively very large derivative counterparties and they move together.

Scheme collateral buffers have been markedly depleted across the board and require rebuilding; this can only realistically happen by selling growth assets like corporate debt, equities and property. So, while rising yields are good news for pension scheme funding levels, they look a likely catalyst for a further liquidation of risky assets.

​Letter in response to this article: