Painted isle: Hydra through the eyes of a child

In the huddle of Greek islands known as the Argo-Saronic Gulf, sun-soaked Hydra has long been a place where creative minds have gathered. Henry Miller, Lawrence Durrell and Leonard Cohen were all captivated by the salt-white houses and the sense of total disconnection (the island was without phone lines until the mid-1960s and remains car-free to this day).

More recently, the island formed the backdrop for a project by photographer Annemarieke van Drimmelen and her partner, the painter Jasper Krabbé, which is the subject of a new book, June, with an exhibition scheduled for later this year. Named after their three-year-old daughter, the photographs record the mundane objects and scenes that caught her attention on family outings around the island and elsewhere. The images have then been overlaid with strokes of paint and snippets of poems to create a series of hybrid, collaged artworks that seek to show Hydra through a child’s gaze. “Her view was so optimistic, beautiful and innocent,” says van Drimmelen. “She can see a whole paradise in a galloping horse or a piece of string.” AH
June by Annemarieke van Drimmelen and Jasper Krabbé is published by Libraryman in an edition of 500 copies. In October, it will go on show at the new Institute Huis Vasari, Amsterdam

In a surreal sequence in Federico Fellini’s The Temptation of Dr Antonio, a sequin-clad Anita Ekberg steps out of an advertising billboard and proceeds to bait the prudish Dr Antonio with an array of tantalising delights, chief among them a fridge full of ice-cold drinks. According to the critic Gianni Canova, Ekberg’s seduction could be taken for a burlesque of an advert by Campari, which has often used sensuality to sell.

His new illustrated history, Campari and Cinema, looks at how film has been inspired by the carmine spirit, and vice versa. Examples from Campari’s long history of image-making run from its 1901 poster depicting a couple kissing under a crimson light to the 1926 poster showing a bottle protruding from a drinks table, “almost reproducing the motion of a film camera”, to Paolo Sorrentino’s provocative, noirish 2017 campaign film Killer Red, which opens with a red-nailed hand holding the stem of a curvaceous cocktail glass. Using these, plus close readings of films – including the on-screen depiction of pleasure in When Harry Met Sally – Canova analyses the invention and artistry behind one of the world’s most loved aperitifs. BS
Campari and the Cinema, edited with a text by Gianni Canova, is published by SKIRA, €50

Rural beauty: a chronicle of daily life in Puglia

“Just as there are key moments in the family album, constituted by ceremonies, there are also less intense moments of everyday life,” wrote the artist Luigi Ghirri in 1991, “which are still depicted there because they document the unfolding of an existence.”

This chronicling of both the mundane and the ceremonial defines Puglia, a photographic account of Ghirri’s relationship with the southern Italian region, featuring many previously unseen images. He captures the spectrum of life there, from a pile of bitter puntarelle sprouts drying in the sun to a young girl dressed in her frothy white confirmation gown on her way to the church. It’s all, as the subtitle tells us, tra albe e tramonti (“between sunrises and sunsets”). BS
Puglia: Tra Albe e Tramonti by Luigi Ghirri is published by Mack, £45

Traditionally the subject of still-life paintings, the flower has a rich history in art photography too, from Fox Talbot’s ghostly floral photograms of the 1830s to Lee Friedlander’s thorny monochrome stalks of the 1990s. A new book, the second instalment of a series started in 1991, surveys contemporary contributions to the genre.

This edition includes Robert Mapplethorpe’s suggestive stems of the 1980s, Maisie Cousins’ super-enlarged studies of a slimy, decaying bouquet, and Pedro Almodóvar’s characteristically chromatic still-lifes, which juxtapose wilting flowers against sleek jewel-toned vases – a further example of the filmmaker’s fascination with ageing. As Danaé Panchaud writes in her essay, this compendium shows that “the alleged fixed symbolic meanings of flowers, peddled by keen Victorian marketers and based on a very narrow range of examples, are consistently being disproved by new, and often unexpected, allegories and symbols”. BS
Flora Photographica: Masterworks of Contemporary Flower Photography by William A Ewing and Danaé Panchaud is published by Thames & Hudson, £45

Ever since the Belle Epoque, when new train lines opened up the south of France, the Cote d’Azur has attracted photographers and artists with its sapphire waters and near-tropical light.

Here, curator Sophie Wright and photography expert Geneviève Janvrin chart the photographic history of the Riviera – from Robert Capa’s shots of a holidaying Picasso to Lee Miller’s sultry summer in Cannes. Wright approvingly quotes Matisse, who said of his own time there that “everything was fake, absurd, amazing, delicious”. BAS
Light on the Riviera: Photography of the Cote d’Azur by Sophie Wright and Geneviève Janvrin is published by teNeues, £50

Mallakhamb – translated from the Sanskrit for “wrestler pole” – is known as the mother sport of ancient India, dating back to the 12th century: it was used by warriors and wrestlers to train in the absence of an opponent. The gravity-defying art combines yoga poses and wrestling grips with the athleticism of gymnastics, the fluid sequences producing a form of aerial acrobatics.

Under British rule, Mallakhamb’s popularity dwindled – but in recent years it has undergone a revival, and it is now recognised as one of the fastest growing sports in the world.

In his new book, London-based photographer and regular HTSI contributor Vivek Vadoliya captures the aspiring performers at the Shree Samarth Vyayam Mandir institute in Mumbai. Vadoliya’s vibrant work, rich in hues of ochre and red, explores notions of identity and community. “I was captivated by the expression and language of the movement,” he says. “In their gestures we recognise poses from yoga, which for me are not only mesmerising but inherently Indian.” Vadoliya’s work, which draws from his experience as a second-generation British Indian, is a celebration of the brown body and a love letter to his once-forgotten ancestral exercise. AH Mallakhamb by Vivek Vadoliya is published by Antihero Press, £35

Into the deep: the waters of the world

Filmmaker David Ondaatje takes readers on an aerial journey over the world’s waters in his new book. In a fishing community in British Columbia, the rivers run deep grey, almost black in September; in Tuscany, off Punta Ala Beach, the water glows algae-green, while a giant lilo transports a group of swimmers through the calm waters; and in Montana, once-teeming spring creeks are now peacefully free from fishermen, following an intervention by conservationists.

Ondaatje showcases the myriad uses of these waters while also documenting their increasing overuse, as well as the risks they face from global warming and agricultural exploitation. BS
Water Views: Rivers, Lakes, Oceans by David Ondaatje is published by Monacelli at $45 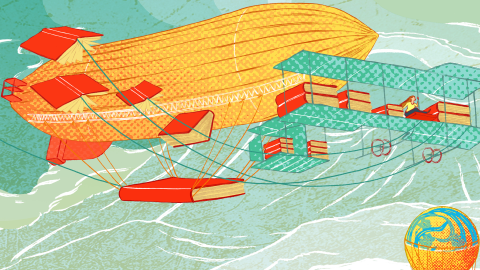