Laila Gohar shells out on a fava party

What better way to celebrate the start of June than a feast of green beans?

Hidden within the Notes app on my phone is a calendar log I keep of the first spring sightings – produce at the farmers’ market, trees and flowers in Central Park (a block from my apartment) and the giant cherry blossom tree across the road, which I can see from my bedroom window. This year the pointy green buds started to pop during the very first days of April. Then they unfurled to reveal tiny light-pink confetti. I took note. By the middle of the month there was a pink cloud outside of my bedroom window, which later in the month became a carpet that engulfed the sidewalk. By May the cherry blossoms had come and gone. I watched and took notes, as I have for the past five years. After months of root vegetables and alliums, splashes of green start breathing life into the market once again. Green garlic comes first. Then asparagus, ramps, rapini… Then a little bit of red. First rhubarb, followed by strawberries. I compare year after year.

But June is when things really start getting interesting around here. For the past several years, favas – broad beans as they’re known in the UK – have arrived on the (market) scene during the first couple of days of June, and what a glorious gift they are. In Egypt favas are celebrated and mark the beginning of a holiday to welcome the spring season called “Sham el-Nessim” (it translates as “smelling the breeze”). This is a pharaonic tradition at least 4,500 years old. It’s also a holiday where Egyptians from all faiths gather at parks to shell and eat raw fava beans with family. I remember from my childhood that the favas at the market in Egypt would coincide with a giant royal poinciana tree, which would explode with flame-coloured flowers at the same time. To this day I associate the pale-green colour of a fava bean pod with electric orange. This year, I decided to blend tradition with new customs and throw a fava and spring green chickpea stew party with polenta. I adore polenta and eat it all winter long. It can feel a bit too warming in the summer though, so this is probably one of the last times I’ll eat polenta till it’s cold again. Combining fava and polenta in June feels like kissing an old lover goodbye while looking at the new one from the corner of your eye.

Fava is both luxurious and laborious. Not only do you have to shell the favas by removing them from the pods, you must also peel them after a quick blanch. It takes time. The best way to do this is by throwing a shelling party and inviting people over to shell together. I had about 10 friends over on a Sunday afternoon, and we worked through a giant mountain of fava and green chickpeas that would have taken me far too long by myself. I laid out other spring treats such as green almonds, radishes, butter and a big loaf of bread that people enjoyed as they shelled. I like serving green almonds raw with coarse salt and cold beer. Young green almonds are pleasantly bitter and have a soft, gelatinous centre. The entire thing is not only edible but also delicious. We also happily ate plenty of raw fava with bits of pecorino, as the Romans do. The smell of lilacs lingered.

How To Host It
Yes, we can! An ode to the anchovy, and other tinned-fish wonders 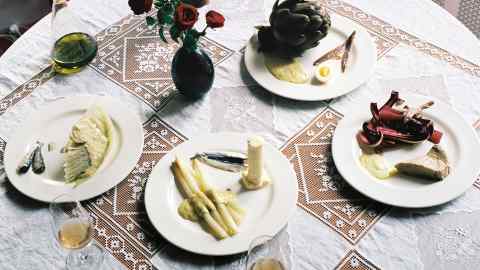 While the shelling was under way, I got started on the polenta. I follow a 5:1 ratio of water to grains. I start by bringing the water to a boil and adding salt. Then I slowly pour in the polenta while I continuously whisk. Polenta cooking time varies based on how coarse it is. Mine took about an hour. And here is how to go from OK polenta to polenta you can’t stop eating: after it’s done cooking, add a (very) generous amount of mascarpone, butter or Parmesan cheese. Since I usually have only the latter two in the fridge, I often use a mix of butter and Parm.

Once we had two sizeable piles of green chickpeas and fava ready, I set the chickpeas aside and blanched the beans for a minute, then handed that bowl back to my guests to pop the skins off. I sliced shallots and cooked them down with bits of guanciale and bay leaf. I added leftover vegetable stock I had from blanching some vegetables for a frittata, which I also served that afternoon. Then raw chickpeas went in, followed by the blanched favas, which cooked for a couple of minutes until everything was warm through but still crisp and vegetal. I added a bit of basil and lemon zest on top and served it over creamy polenta – and with that the season was off to a brilliant start.