Omega and Swatch surprise the market with a £207 MoonSwatch

Is it a cheap Speedmaster? A fancy Swatch? Or a brilliant mix of the two?

It takes quite a lot to pique the jaded appetites of the modern, hype-savvy, drop-sensitive consumer, but Swatch has pulled it off with a new range of candy-coloured Omega Speedmaster-inspired chronographs. The two brands, both part of Swatch Group, have come together to make MoonSwatch, a name which, like the watch itself, is a play on the famous Moonwatch.

Made from a topically tech/eco-sounding material named Bioceramic, apparently a mixture of ceramic and castor oil, it shows how far once “exotic” materials have improved in quality and come down in price. The colours – particularly the daffodil yellow of the Mission to the Sun version, the carmine of the Mission to Mars, and the (now inevitable) “Tiffany” blue of the Mission to Uranus – are fresh and bright.

But the greatest achievement of this range of 11 watches, one for each planet in our solar system, is that no one saw it coming. Even internally it was kept from all but a very few. Nobody really knows whether it is a cheap Speedmaster or a fancy Swatch. And that confusion is a good thing as it gets people talking. Some will see an icon traduced (one social media comment described it as the horological equivalent of Rolls-Royce partnering with Toyota). But I reckon that more people will see a bit of fun.

What is indisputable is that it (a) gets the collector community to focus on the Swatch brand and (b) massively extends the accessibility to the fabled Speedmaster. A Canopus white-gold Omega Speedmaster (with the new calibre 321) is currently £69,500 and before this announcement the entry price into the Moonwatch world was £5,420 (on strap). The Omega MoonSwatch is £207.

Under the leadership of the energetic Raynald Aeschlimann, Omega (and in particular its celebrated chronograph) has surfed the social-media-era watch boom with flair, exploiting minor cosmetic details once known only to hardcore collectors to create a broad range of collectibles for a generation of internet-educated instant experts.

The MoonSwatch rehearses the familiar tropes in a way that speaks to the philatelically minded collector: viz the “dot over 90” tachymeter bezel, the 42mm case diameter, and the recessed subdials. Moreover, every watch in the collection is different: for instance, the idiosyncratic “Alaska Project” subdial hands on the Mission to Mars. But it is preserved from pastiche by the fact that it is, of course, a quartz chronograph using a movement that dictates a specific 2-6-10 subdial configuration, the typical Swatch dial layout.

Importantly, it brings the Speedmaster into the market for design-led, entry-level quartz timepieces that have been issued by boutique (Furlan Marri) and big (Cartier) brands alike, but in a way that only Swatch Group could do. It is indisputably original. Omega is sometimes criticised for following what Rolex does, but whatever else you may think about it, this is not an accusation that can be levelled at the MoonSwatch. 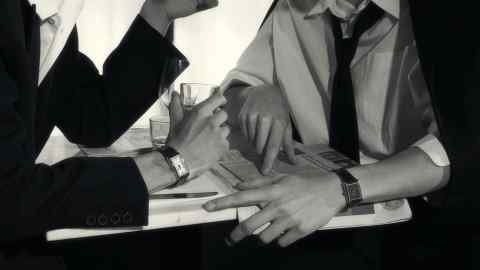 This is not the first time that Swatch has riffed off Omega. In the past Swatch has taken advantage of Omega’s position as the official timepiece of 007 to release a boxed set of Bond-villain-inspired watches. But this unambiguous “tribute” to a specific and much-loved model raises the question of what further opportunities Swatch will espy in Omega and, for that matter, other brands in the group: maybe the time has come for a Blancpain x Swatch Fifty Fathoms, or even a Breguet x Swatch tourbillon?

MoonSwatch goes on sale this Saturday in 110 Swatch boutiques around the world. But even before the official release the watch has achieved its purpose of getting people talking about Swatch: sales, which will surely be significant, are a bonus.