Bone up! How the corset became a symbol of emancipation

The bodice is back, and it’s as provocative as ever

“The satin corset may be the nude of our era,” said the French modernist Édouard Manet. Certainly, his 1877 painting Nana, featuring a woman wearing a blue satin corset, a slip, silk stockings and high-heeled shoes, was as shocking as a naked body at the time. Nana was a common term for a sex worker, and Manet proudly chose to centre the painting on the nearly life-size woman, rather than the seated gent in his top hat. The painting was refused at the Salon of Paris that year, deemed too contemptuous; instead, Manet showed it in the window of a trinket shop on the Boulevard des Capucines, where it became a major attraction. That the laced-up garment was heavily involved in the making of this work seems typical – if you want to provoke, even today, throw in a corset.

Bodices, stays, girdles, corsets; it’s amazing that an ancient and once quotidian piece of underwear, found in knicker drawers or discarded on bathroom floors for about the past five centuries, can still find the energy to be controversial. Vivienne Westwood channelled its power when she incorporated corsets into fetishwear in the 1970s, and then in the refined daywear of her couture collections in the late 1980s. Madonna too, when she wore a pink Jean Paul Gaultier pointy cone bustier for her Blond Ambition tour in the 1990s. Whether Janet Jackson planned her “wardrobe malfunction” at the 2004 Superbowl or not, she would have been well aware of the titillating power of her rubber bodice. And when Billie Eilish chose the cover of British Vogue earlier this year to reveal her body in a way the previously covered-up teenage pop idol had never done before, she did so in a series of custom-made corsets; judging by the public’s response, the corset can still be sensational.

“They’ve certainly made a comeback this season,” says Holly Tenser, ready-to-wear womenswear buying manager at Browns Fashion. She sees it as part of the Y2K trend, the influence that fashion of the early 2000s is having on current design. “Think Britney Spears stage corsets,” she says. “The boning details and vertical lines echo a curved female form and look incredible on all bodies, including men – Dion Lee shows this in his genderless collections.” The Australian designer is a long-standing corset champion, infusing his creations with a street edge in jersey or leather and lace, paired with oversized cargo pants. Tenser also points to examples from Mugler, which plays with sheer mesh panelling in corset tops and dresses, and new-generation talent including KNWLS and French brand Miaou. “Thankfully,” she adds, “this season’s iterations are designed to be seen as more of a fun, wearable fashion item as opposed to a body-constraining undergarment.”

The boning details and vertical lines look incredible on all bodies, including men

This is the other reason that a corset provokes – as a villain of the woman’s wardrobe, a tool of patriarchal oppression. “It’s been taken up by popular culture in the 20th and 21st centuries as the defining image of submissive Victorian womanhood,” says Jenny Lister, curator of 19th-century fashion and textiles at the Victoria and Albert Museum. She cites an article in Smithsonian magazine, published after the bodice-ripper Bridgerton first aired in 2020, analysing the show’s opening in which Prudence Featherington is tightly laced into a corset. “The dress she’s wearing on top is an empire line that falls from under the bust, so you don’t actually need to be tightly laced into a corset to wear it,” says Lister. The series champions the idea that its heroines constantly come up against and challenge the patriarchy. Prudence is not the heroine and is a desperate husband hunter; her tight corset is a metaphor for the societal ideals she is conforming to. “In reality, corsets weren’t particularly oppressive at all,” says Lister. “In their various forms, they were very functional from about 1500 until the 1960s.”

It’s an argument that was put forward in 2001 by the fashion historian Valerie Steele. In her book The Corset: A Cultural History, she disproved the notion that the corset was either physically or politically dangerous to women. Yes, they were worn for hundreds of years to obtain the fluctuating fashionable silhouettes of the day and to optimise physical attraction, but is that any different to how and why undergarments are worn today? Are we, in the age of shapewear and Kardashian-style waist-trainers, so very much more liberated? “Corsets were functional garments and the norm for a very long time, something that women accepted in the way that we accept wearing a bra,” says Lister. “They were seen as healthy, good for the posture – even children wore them. But they came in soft fabrics and the structures were flexible. They interplayed with the different emphases placed on different parts of the body at different times – the waist is raised and lowered again and the corset helps you create that fashionable silhouette.”

Although corsetry is often presented in film and on TV as being tightly laced with the edges meeting at the back, leading to fainting fits or injury, this is an idea that undermines the agency of individuals. “The laces could be tied according to your taste,” says Lister. “Depending on what you were doing – working, relaxing or being active – they might have been worn tighter or looser. Yes, everyone wore them, but they didn’t have to be restrictive.”

HTSI
Inside the cult of Self-Portrait 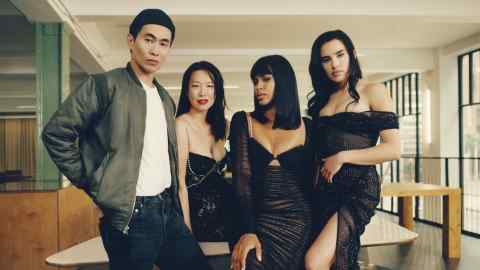 Perhaps this is the rendition of corsetry that contemporary designers – and the young women and men of Gen Z, who have embraced bodice-type crop tops and vests in soft jerseys and cottons, wearing them with sweat pants and boxer shorts – are getting closer to. A garment that enhances rather than restricts, celebrating the body rather than oppressing and objectifying it. Or is that simply a more convenient reading for an item that will always have the potential to provoke and titillate? Maybe Manet was wrong – the corset could be the nude of every era.