Athens is more of a person than a city. It has a strong personality that is sometimes adorable, sometimes overwhelming. Talking about Athens is a bit like going to a marriage counsellor: it reminds you of the reasons you fell in love with this crazy creature. I love that it’s a place more interesting than beautiful, a city that is always changing.

Our cultural work at the Onassis Foundation aims to connect people, ideas, content and buildings with events in the city such as Plásmata, an outdoor exhibition of digital art in Pedion Areos Park (until 10 July). Pedion is not a tourist destination, so you will see people praying towards Mecca, doing yoga or smoking; people who have lived there since the ’60s. But right now you will also see a huge red planet – a light sculpture by Spanish artist SpY.

I love how Athens has real neighbourhoods. If you take the cable car up to Mount Lycabettus you get a good sense of the city and its contradictions – the ancient ruins but then also the ugly blocks of flats. I think I live in the best area, in Mets. It’s in the centre, but hidden, next to the Kallimarmaro stadium. It has a boho vibe and you can sit in Odeon café and just enjoy the people passing by. But it’s when you walk around Athens that you begin to understand all the layers of time beneath your feet. There are only a few cities in the world that have been inhabited for more than 3,000 years. The National Archaeological Museum, right next to Pedion Park, has the most amazing collections, although everybody tends to go to the Acropolis Museum instead.

Having said that, you can’t come here and not go to the Acropolis. The Foundation is really proud of its work to make the site more accessible, with an amazing glass lift. You get good Acropolis views from Perianth Hotel – all terrazzo floors and Athenian modernism – and at the Grande Bretagne, an Athenian landmark with a rooftop bar.

But for deep talk with my friends, I go to the Galaxy bar. For 50 years Mr Yannis has been behind the bar, listening to all of Athens’ discussions and never saying a word. This is my place; it’s where I’ve made my best mistakes. It opens up at 5pm and it closes when the last person leaves. It’s a proper bar, with jazz in the background and real liquor. And they always serve the same thing with it: toasted bread with butter, hot mustard, cheese and peanuts. My favourite restaurant, though, is Seychelles in the ancient neighbourhood of Keramikos. It’s Greek Mediterranean cuisine. Just order the whole menu and put it all in the middle to share, then wander around Avdi Square, where there is a huge public artwork we commissioned: a mural by Ilias Papailiakis called The Kiss.

During the summer, there is something romantic about the city’s open-air cinemas, such as Riviera in Exarchia. And for shopping, I love the little wholesale shops that surround the fish and meat markets on Athinas Street. They have huge basements selling plates for restaurants and baskets for farmers, where you can find things that are actually made in Greece such as a unique olive oil bottle or a brilliant bread knife. There are lots of little restaurants around the markets too; the best is Díporto. There isn’t a menu; you eat whatever is served that day. It could be fava bean soup or sardines. The only time it’s closed is in November when the owner goes back to his village to make Tsipouro, which is like Greek grappa, and something you have to try in Athens.

How To Spend It In...
Conductor Lorenzo Viotti’s guide to Lisbon 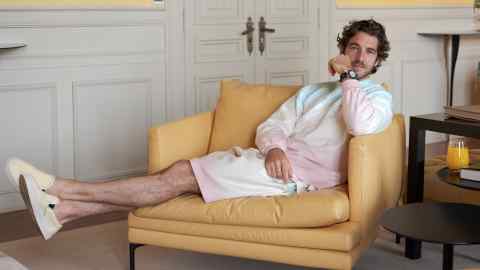 It’s also worth exploring the local jewellery designers – Lito, Nikos Koulis, Ileana Makri and Yannis Sergakis. They all do very different work, yet combine cosmopolitanism and Greekness. And the Athens art scene is fascinating. The National Museum of Contemporary Art is a great starting point, and there are lots of galleries that I like, such as The Breeder, PET Projects, Eleftheria Tseliou, Rodeo and Carwan. But just walking around areas such as Neos Kosmos or Mets can lead to conversations with artists. You’ll probably end up in their studio at two o’clock in the morning, talking about the most important things in life.

Next year, a new Onassis cultural space will open, designed by Yinka Ilori, to bring together fashion and crafts, biotechnology and design. It will be a place for the things that make everyday life more human: food, drinks, music, art. Athens will be more interesting than ever.