Twelve writers compete for the £15,000 award for the best business book proposal by an author aged under 35

The Financial Times and McKinsey have unveiled the shortlist for the 2018 Bracken Bower Prize, awarded to the best business book proposal by an author aged under 35.

The prize, first awarded in 2014, has helped a number of young business writers to bring their ideas from proposal to publication.

Judges will select up to three proposals from the 12 shortlisted. The finalists will be named later this month, when FT.com will publish extracts from their proposals.

All the finalists will be invited to a masterclass in London with representatives from the publishing industry, who will advise them on how to bring business ideas to the bookshelves.

The winner, who will receive £15,000, will be announced on November 12 at a dinner in London, where the 2018 FT & McKinsey Business Book of the Year Award will also be presented.

The shortlisted authors for the 2018 Bracken Bower Prize are:

Saadia Zahidi, the inaugural winner of the Bracken Bower Prize, saw Fifty Million Rising, a book based on her winning proposal, make the long list of this year’s FT/McKinsey Business Book of the Year Award.

Last year’s winner, Mehran Gul, has received struck deals worth more than $100,000 for a book, The New Geography of Innovation, based on his proposal.

The Bracken Bower Prize is named after Brendan Bracken, former chairman of the FT and Marvin Bower, former managing director of McKinsey. It will be awarded to the best proposal for a book about the challenges and opportunities of growth by an author, or authors, aged under 35.

Judges are looking for a proposal that aims to provide a compelling and enjoyable insight into future trends in business, economics, finance or management.

Past finalists have written books that will be published this year or next, including: Chris Clearfield and András Tilcsik (winners 2015), Meltdown; Scott Hartley (finalist 2016), The Fuzzy and the Techie; Alex Lazarow (finalist 2017), Startup Heretic (forthcoming); Igor Pejic (finalist 2016), Blockchain Babel(March 2019); Irene Yuan Sun (finalist 2015), The Next Factory of the World. 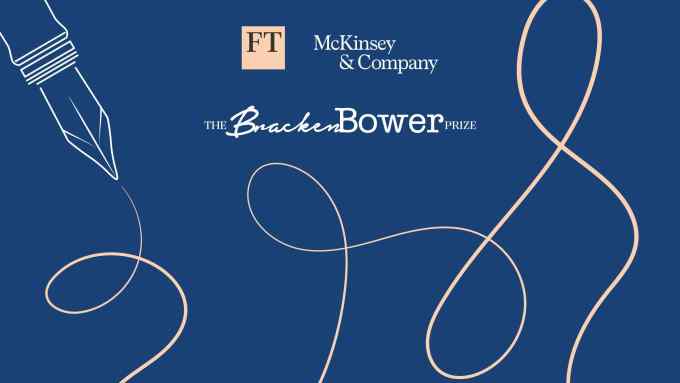