Time to start south-of-France dreaming, plus dining with giraffes

I’m writing this at a time when it feels possible that a late-summer, quarantine-free holiday in southern Europe may yet emerge as an undertaking somewhat less difficult to execute than a K2 ascent or polar expedition. Just in time to fuel that optimism, two buzzy names in French hospitality have planted flags in opposite corners of Provence. In the hills outside St Tropez, the Airelles group (which has resorts and chalets in Gordes, the Val d’Isère and Courchevel, as well as the only hotel in the grounds of Versailles) has commandeered the historic Château de la Messardière. After a two-year renovation, the 25-acre, 103-room property reopened last month with a Valmont Spa, a raft of tailored experiences – from perfume-making workshops to guided cycling expeditions – and Matsuhisa Saint-Tropez, Nobu Matsuhisa’s pop-up, in residence until October. To the northwest, in the Vaucluse, Le Moulin de Lourmarin has just opened in the absurdly picturesque village of the same name. A sister to the supercool Les Roches Rouges on Cap Esterel, housed in an 18th-century olive-oil mill, it has just 25 rooms, remade (“under-made”, and beautifully so, might be more accurate) with natural tones and spare furnishings by Marine Delaloy and Paula Alvarez de Toledo of Paris-based Jaune. A casual bistro is similarly sleek, while the flagstone terrace, shaded by limes, delivers the old-world Provence feels. airelles.com, from €1,150; beaumier.com, from £111

Nairobi’s Giraffe Manor is already the stuff of bucket lists and social-media saturation (witness the 74,000 #giraffemanor posts on Instagram). It’s a very private hotel, and the experience of sharing breakfast with its population of leggy ruminants (known to reach their heads through the breakfast-room windows to inspect what’s on offer) has historically been limited to guests. But last week its owners, The Safari Collection, opened The Retreat at Giraffe Manor – a sprawling multipurpose complex on the same sanctuary, with extensive wellness facilities, a restaurant and rooftop bar-garden, and day rooms for TSC guests. The giraffes won’t be breakfasting here, but you’re likely to socialise with them next to the 21m infinity pool. thesafaricollection.com, day rooms from $800, day passes from $250

Italy’s tourism numbers haven’t come close to recovering to pre-pandemic levels (some would say a good thing); but development is moving apace. Ennismore’s Hoxton group, which nails it style-wise at locations from Amsterdam’s Herengracht to Paris’s 2nd arrondissement, chose the unorthodox Roman neighbourhood of Salario for The Hoxton Rome, its first Italian digs – belle époque houses, adjacent to swanky Parioli, and pretty much zero truck with cobblestones and monuments. But the word is very positive, from superlative eating (thanks to a partnership with Marigold, long a favourite of expats and Roman chefs/food editors alike) to a terrace garden and sleek, midcentury-inflected rooms. Meanwhile, in September, W Hotels will make its first foray into Italy in an ice-pink palazzo on the other side of the Villa Borghese. The pinnacle of chic once upon an early-’90s time, the W brand had lost much of its cachet. Marriott, its parent company, hopes to totally reboot it in the Eternal City, with Sicilian superchef Ciccio Sultano overseeing culinary offerings, a rooftop bar with 360-degree views, and decor that channels ebullient Man from U.N.C.L.E. style. thehoxton.com, from €160; marriott.co.uk, opens in September, from €400

In with the inn crowd

And, for the 2022 wishlist, a new address in Australia: a sweet little restaurant-inn-members’ club in the historic town of Berrima, in New South Wales’ Southern Highlands – all bucolic rolling hills and chic farm shops. Built in 1844, Berrima Vault House has been restored by a team of culinary and hospitality consultants led by sometime Soho House Group creative director, Dan Flower; Ali Hillman, who oversaw Paul Allen’s public-art programme at Microsoft, has curated the art. Along with the members’ spaces, there’s a series of indoor and outdoor working areas, dining venues and bars, a rambling rose garden, and The Courthope residence, whose very pretty ensuite bedrooms afford guests access to all members’ facilities. berrimavaulthouse.com, from AU$600 (about £325) 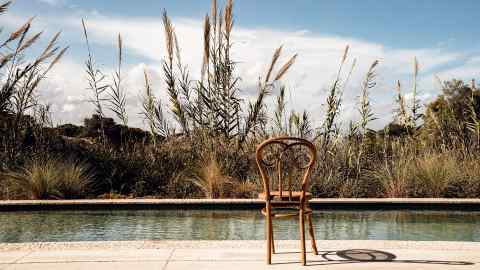