A suite of luxury Mercedes electric vehicles will hit the streets in the next 18 months, the German carmaker’s chief executive said, as he unveiled a battery-powered version of the brand’s flagship S-Class saloon, designed to lure customers away from the likes of Tesla.

Ola Kallenius, who leads Mercedes’ parent group Daimler, told the Financial Times that the EQS, which is set to go on sale in the late summer, will be followed by an all-electric E-Class saloon and two sport utility vehicles based on the same platform within two years.

At the end of that period, the line-up would be available in Europe, China and the US, he added, complementing a less-expensive range of five electric compact cars and the Mercedes EQV people carrier.

Kallenius’s announcements came as the company reported adjusted earnings before interest and taxes on Friday of €4.9bn, significantly higher than the €3.9bn projected by analysts.

The Daimler boss hopes to build on the first-quarter sales momentum with the launch of the EQS, which has received a rapturous reception from leading analysts and has an advertised range of up to 770km per full charge, outpacing Tesla’s Model S and BMW’s upcoming iNEXT.

However, some of the EQS’s features, such as the ability to offer over-the-air updates that unlock new functions, have been a mainstay in products by younger rivals, including Tesla and China’s Nio, for years.

The Big Read
Lex in depth: a solid case for the next generation of batteries 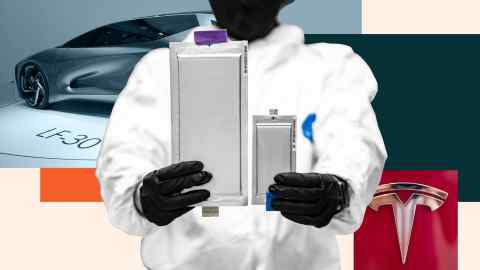 The Stuttgart-based company had “built up a brand promise over 100 years plus, and with that brand promise comes a certain level of substance”. This would entice wealthy consumers, he added.

While profit margins for the EQS are lower than for the lucrative S-Class, Kallenius said the car would “start with a healthy profitability level from the word go”, which would improve as battery costs came down.

The model, which has not yet been priced, will probably sell for between €80,000 and €150,000, Bernstein analyst Arndt Ellinghorst predicted, depending on specifications.

Mercedes would make an “easy 20 per cent [margin] on the high end version,” he added, while basic versions would make between 10 and 15 per cent.

Although it will be manufactured on the same production line as its combustion-engine sibling, Kallenius said Mercedes would not limit the number of EQS cars it made in order to preserve capacity for the S-Class, which has attracted more than 50,000 orders since its launch last September.

“We are not going to artificially strangle the ramp-up of our electric vehicles,” he added.

Parent company Daimler’s shares rose 3 per cent to €77.25 on Friday morning after the company’s results, an increase of more than 200 per cent since lows in March last year, buoyed in part by strong sales in the Asia-Pacific region. In the three months to the end of March, Mercedes set a record in China, delivering 222,520 vehicles.

Kallenius said he believed the brand would continue to see “high growth rates in the second half of the year” because of pent-up demand, before sales level out again.

Get alerts on Electric vehicles when a new story is published