We’ll send you a myFT Daily Digest email rounding up the latest Science news every morning.

If mankind were to receive signals from the stars confirming the existence of extraterrestrial life in the next few decades, there is a chance they will be heard and understood first among the Dorpie sheep and wind-powered water-pumps of South Africa’s Karoo desert.

Located deep in the isolated Northern Cape province and named after another critter in the area’s wildlife, the 64 receptors of MeerKAT, a powerful radio telescope, have placed South Africa at the forefront of astronomy.

The dishes — which each stand roughly 20 metres tall and weighing 42 tonnes — listen to radio waves from distant galaxies. Their electronics then convert the signals into data that astronomers analyse in an effort to better understand the universe.

Eventually a Nobel Prize might flow from MeerKAT’s use of the clear Karoo skies to examine the nature of distant galaxies and the early universe — and potentially, in time, join the search for life beyond Earth. But the project has also brought benefits closer to home.

“I won’t win that Nobel Prize, but I and my colleagues will feel like it’s the greatest achievement,” says Alex Bassios, co-founder of Peralex, a Cape Town-based technology company that contributed to the success of MeerKAT.

The R3.2bn ($233m) project also illustrates how South Africa’s radio astronomy boom has supported the growth of its high-tech industries.

As MeerKAT’s receptors process cosmic radio waves, they translate them into vast amounts of data — about 275 gigabytes a second. These data are processed and stored using hardware designed and manufactured by Peralex to bespoke specifications.

As MeerKAT gears up to take its place in an even bigger global undertaking that is pushing astronomy further — the Square Kilometre Array (SKA), due to launch in the 2020s — South African technology will be at its heart.

“It’s been a very welcome addition to the critical mass of work being done in this country at the top level,” Mr Bassios says. The SKA will eventually span the hinterlands of South Africa and Australia, with outstations in other African nations. It will serve as the world’s biggest and most sensitive radio telescope.

Its potential is already being hinted at by MeerKAT, which has produced images of the supermassive black hole at the centre of the Milky Way, about 25,000 light-years from Earth, and has discovered a rare magnetar — a type of neutron star thought to have a powerful magnetic field.

The Karoo’s desert climate and its open skies already made this part of South Africa a naturally endowed listening post for the faintest signals of the cosmos. “You could say the universe is on our side,” David Mabuza, South Africa’s deputy president, said at MeerKAT’s launch last July.

At the same time, the South African government has decided to help the exploration of the universe along a bit. It has passed a law to conserve the area from possible radio and electrical interference, and it has laid power and fibre-optic lines.

The project — which Mr Mabuza described as an “iconic scientific instrument designed entirely by South Africans” — also spurred local industry into delivering on time and within budget. That makes MeerKAT a success story for a country that has often worried about a brain drain of engineering and scientific talent to other countries like the US and UK.

Mr Bassios says that “we have good engineers in South Africa, but they need to know that they’re doing groundbreaking, world-leading work”. 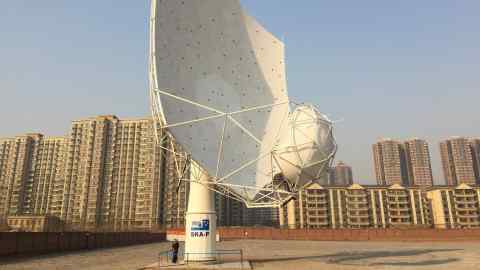 Peralex’s signature hardware for MeerKAT, Skarab, uses state of the art versions of “field-programmable gate arrays”, high-end integrated circuits that allow a great deal of flexibility in handling computations. “That was a very challenging thing to do, and we did it very successfully,” says Mr Bassios.

Another unusual challenge was the Karoo desert environment. The cosmic radiation picked up by the MeerKAT dishes is converted and amplified by cryogenically cooled receivers before being digitised. The signals are then sent via subterranean fibre-optic cables — avoiding the surface heat — to banks of Skarabs for processing. That has involved adaptations for cooling and shielding the hardware from radio emissions that might cause interference.

Radio astronomy organisations around the world have taken an interest in Skarab. There are other applications beyond this field, Mr Bassios says. High-frequency traders looking for an edge in the financial markets might also see benefits from the technology’s ability to process information with few delays, or so-called latency holding up computations.

“It is ideally suitable,” Mr Bassios says. “It has got a very fast data throughput and low latency.”