A new taste of Honey & Co in Bloomsbury

A trip to my favourite London street reveals the Victorian public lavatory at one end has been turned into a trendy wine bar called “WC” (as in “wine and charcuterie”). Its wooden stalls have been converted into booths and the porcelain urinals upholstered so that you can sit in them. The signature rum cocktail is named “Trade Winds”. It sums up what I love about Lamb’s Conduit Street in Bloomsbury. You don’t always know what you’ll find, but chances are you’ll like it.

With its vibrant mix of independent stores, Lamb’s Conduit Street is the perfect spot for retail therapy. It’s also home to some of London’s most beloved drinking and dining institutions. The Lamb, built in the 1720s, is one of the few remaining pubs with “snob screens” (hinged frosted-glass windows allowing the smart drinkers to order from the bar then close the windows again to separate them from the other punters). Charles Dickens is said to have drunk there. No less a landmark is neighbouring Italian trattoria Ciao Bella, which opened in 1983 and still harks back to that era with its laminated menus of Anglicised classics and matinée idols on the walls. When I go, I always stick to lamb chops followed by tiramisu so I’ve yet to try the signature spaghetti al cartoccio, which comes in a greaseproof paper bag. Once unwrapped, the tangle of seafood and pasta spills out in a puff of steam.

Despite appearances, things change, even at Ciao Bella. The resident pianist is gone for now, a casualty of the pandemic, although judging from the reaction of one waitress this may not be a bad thing. And the street has evolved too, mostly for the better. Fears that a chain supermarket would take up residence at number 72 were forestalled in 2011 when chef Arthur Potts Dawson launched The People’s Supermarket (members who contribute their time to work in the store receive a discount), inspired in part the Park Slope Food Co-op in Brooklyn. And Redemption Roasters, many of whose staff are former offenders, serves excellent coffee. While I mourn the loss of the op art-inspired design emporium Darkroom, who but the lactose-intolerant could begrudge the arrival of artisan cheese merchants La Fromagerie in its place?

The newest arrival is Honey & Co Bloomsbury, the latest Middle Eastern restaurant from husband-and-wife team (and FT columnists) Itamar Srulovich and Sarit Packer. The duo have taken over the site previously occupied by Cigala, and the opening marks a new chapter for Srulovich and Packer who, earlier this year, closed their original Fitzrovia site after 10 years. Despite their attachment to the old space (“I would have given my kidneys to stay,” says Srulovich), they had outgrown its modest proportions. “We were feeding 150 people a day on a domestic four-burner stove,” says Packer. The new site is perfect – a corner location with big windows that reminds them of “the openness of back home”, says Packer, who grew up in Israel. The menu will major on their signature beautifully tasty Yemeni falafel, chicken shish, slow-roast lamb, and aubergine shawarma.

The couple were already familiar with Lamb’s Conduit Street before they moved there. Their publisher’s office used to be around the corner and one of their FT editors lived across the road. They’re also good friends with La Fromagerie founder Patricia Michelson, whose daughter’s engagement party they catered. And Dan Keeling of Noble Rot (directly opposite) is overseeing the wine list. Already they feel part of a community. 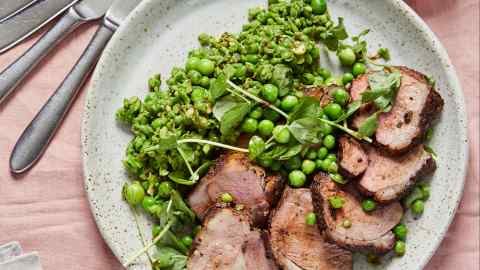 Though the new space is bigger, the duo are keen to preserve the intimacy of the former restaurant: the new 55-cover venue is nearly double the size of the original 25-cover space. “We had customers in tears the week [before it closed],” says Packer, an attachment she attributes to its cosiness and “the impossibility of it being a restaurant [when] it was the size of your living room.” In an effort to recreate that, the pair has divided the new space into small “huggy” rooms, and installed fixtures from their own home, including a bookshelf and a painting that once hung over their bed.

As for the food, there will be additions. With more space in the kitchen, the pair will resurrect labour-intensive dishes such as dumplings, fritters and offal (“because it’s a huge part of Middle Eastern food and we love it”, says Srulovich). Otherwise, the menu will remain largely the same, with their famous feta and honey cheesecake still a star. Lamb’s Conduit Street just got a lot sweeter.