How to supercharge an electric supercar

That the cars of the future will be electric-powered is now inevitable. Whether they will retain the design signatures of the petrol-driven models that preceded them is still yet to be seen. Electric offerings from luxury stalwarts are only just beginning to appear. Though Mercedes, Porsche and Audi had EV models for 2021, Ferrari, Maserati, Bentley, Lamborghini and McLaren’s first full electrics won’t be available until 2025 or beyond (ahead of the 2030 ban on the sale of all petrol and diesel-powered cars in the UK). Early promotional materials for new cars – the Rolls-Royce Spectre and Maserati’s GranTurismo, for example – point to the continuation of a design language that maintains the brand’s signature look. This is a good sign.

Certain features of the electric car have sparked needs that car makers must work around. The need for a stack of batteries along the vehicle floor, for example, means that the cabin must be perched above it, resulting in a car with a more upright stature than petrol- or diesel-propelled vehicles. Yet some designers, especially those seeking to create sleek performance and/or luxury vehicles, have come up with innovative solutions to this issue, such as the “foot garage”, a design secret found in luxury electrics including the Porsche Taycan. This new design element carves space into the battery stack so that the passengers’ feet can be placed comfortably – allowing for a lower profile in a sports car overall.

“Every time you design a car, it is as if you are writing a novel,” says automotive designer Marek Djordjevic, former head of exterior design for Rolls-Royce, and now an independent designer heading his eponymous firm. “Every brand has its own story, and you tell this story through each car.” To be successful, each car must reflect this story, “but it needs to move it forward as well,” says Djordjevic. There is nothing more outdated than a car that is designed to look “futuristic”, as so many cars, both electric and otherwise, have attempted to do.

Rather than strive for differentiation by exaggeration of form, the EV revolution is an opportunity to employ some of the cues left over from an earlier, more compact era of design in which luxury didn’t necessarily mean oversized. Perhaps the electric revolution might bring back modesty, not only of consumption, but of size, line and form.

Some brands have managed to maintain their design signature while making the move toward electricity. Volvo has begun releasing its all-electric models to successful reception. So too with models from Fiat, Audi and Ford, all of which have designed electric vehicles in keeping with the design signatures that define the visual foundations of the brand. The Fiat 500 Electric and Mini Electric are both seamlessly in line with models that preceded them: compact, approachable city cars that look like a lot of fun. Mini head of design Oliver Heilmer, who once characterised the brand’s design signature as having a lot of “emotion” with “a minimal footprint”, has said that the electric drive system provides the possibility for new freedoms in designing interior space and proportions – two elements that have typically set Mini apart. Further, the all-electric Mini has taken design elements from past petrol-driven models – the hexagonal grille and floating roof, for example – and made them integral in the EV.

There are few models as beautiful as those cars produced in the peak-petrol years of the mid-to-late 20th century: the Ferrari Dino, the Aston Martin Volante or DB5, and the Porsche 911 are all examples of the heights to which car design can soar. These giants of the industry, which at that time were mainly focused on motoring as sport rather than luxury, produced racing-inspired cars that by necessity had to maintain exacting weight-to-power ratios and attention to aerodynamic styling in order to gain their edge.

Though it was utility that may have dictated much of the body contouring, there was an artistry behind it. One need only look through the archives of a company such as Pininfarina to see that these were artist-engineers who may have been competitive, but also knew style. Gianni Agnelli’s legendary 1955 Ferrari 375 America and the Lancia 2000 coupé might well serve as inspiration to today’s luxury automotive brands seeking ways to maximise the instantly available power offered by the electric motor, while maintaining efficiency through reductions in size, weight and drag.

Porsche, with the sweeping dome shape and low profile seen on most models from the 356 to the 911 and beyond, gives the cars the appearance of making a single, curvilinear gesture. This revolutionary, highly aerodynamic “fastback” silhouette, pioneered by designer Ferdinand Alexander Porsche, defines the brand and has continued through its history to its current all-electric offering, the Taycan; it will surely feature prominently in the electrics to come. “If you can create something time cannot erode,” said Ferry Porsche of the car maker’s approach to design, “something which ignores the eccentricities of particular eras or moments, something truly timeless – this is the ultimate victory.”

Ferrari chief designer Flavio Manzoni has previously said that “a true Ferrari must be immediately identifiable even without any badging”. Though the cars never look dated, there are a number of subtle design elements from the Ferrari archives – the circular tail lights and low, muscular equine stance evidenced in models like the F12 Berlinetta or the 308 GTS – that appear across the range, and are likely to show up in some fashion on the as-yet unrevealed all-electric models that will surely cause a stir. 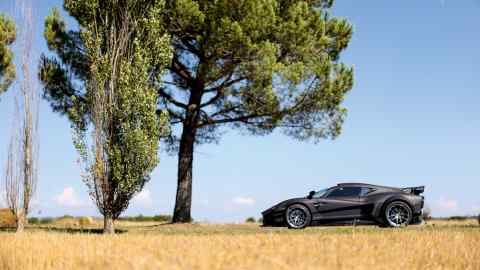 Cars are moving sculpture. When designed well, a car embodies both art and science, while eliciting emotion, attachment and passion. That cars are going electric presents an exciting new set of parameters sure to prompt design responses that will themselves be totemic in the future. Embracing sustainability needn’t result in drudgery. On the contrary, electric cars have the potential to become beacons of a world where eco is defined by its aesthetic rigour.