Foreign investors have dumped a record $33bn of Indian shares since October last year, equivalent to 1 per cent of India’s market capitalisation, according to Goldman Sachs.

The sell-off has ended India’s outperformance against Asian markets during the coronavirus pandemic, when investors fleeing China hunted for other options in the region.

June’s $6.3bn monthly outflow of foreign investment was the biggest for Indian stocks since the pandemic erupted more than two years ago, and the ninth straight month of net foreign selling, according to Goldman Sachs.

“The record foreign selling in India has been partly driven by rotation of money out of India to China/Asean,” said Sunil Koul, Asia-Pacific equity strategist at Goldman Sachs, “and partly because of broader de-risking in Asia amid tightening financial conditions, dollar strength and growth slowdown concerns globally”.

India’s economy is still rebounding from the effects of the pandemic and the sell-off is not being interpreted as a sign of foreign investor disapproval toward the policies of Prime Minister Narendra Modi’s government.

But global commodity price rises triggered by Russia’s invasion of Ukraine have pushed up costs and depressed growth forecasts. The Reserve Bank of India has lowered its growth projection from 7.8 to 7.2 per cent for the next year.

“After so many years of working life in India, I have rarely seen periods like this where foreign investors have sold continuously,” said R Venkataraman, managing director of broker IIFL.

Mumbai’s Nifty 50 and S&P Sensex benchmark indices are down more than 9 per cent in the year to date, while Hong Kong’s Hang Seng is down almost 7 per cent.

India’s historic rally between spring 2020 and autumn 2021 has left prices still high. Some fund managers “think India trades at a historical premium compared to the rest of the emerging markets”, said Venkataraman. “On a relative basis, it’s looking even more expensive”.

Yet Indian investors have eagerly snapped up stocks jettisoned by foreign players, buying $30bn from January to June, according to Goldman.

News in-depthInvestments
Should investors step back into emerging markets? 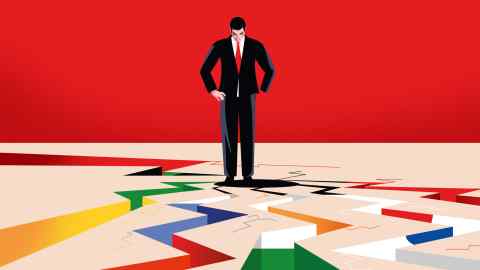 Without domestic investors, Indian equities would have been in far greater trouble.

“On an index level, it should have been at least 10 per cent lower by now,” said Ajay Saraf, head of investment banking and institutional equity at ICICI Securities. “But the fact is that domestic buyers are pretty resilient until now”.

However, Goldman’s Koul cautioned that this trend might not last.